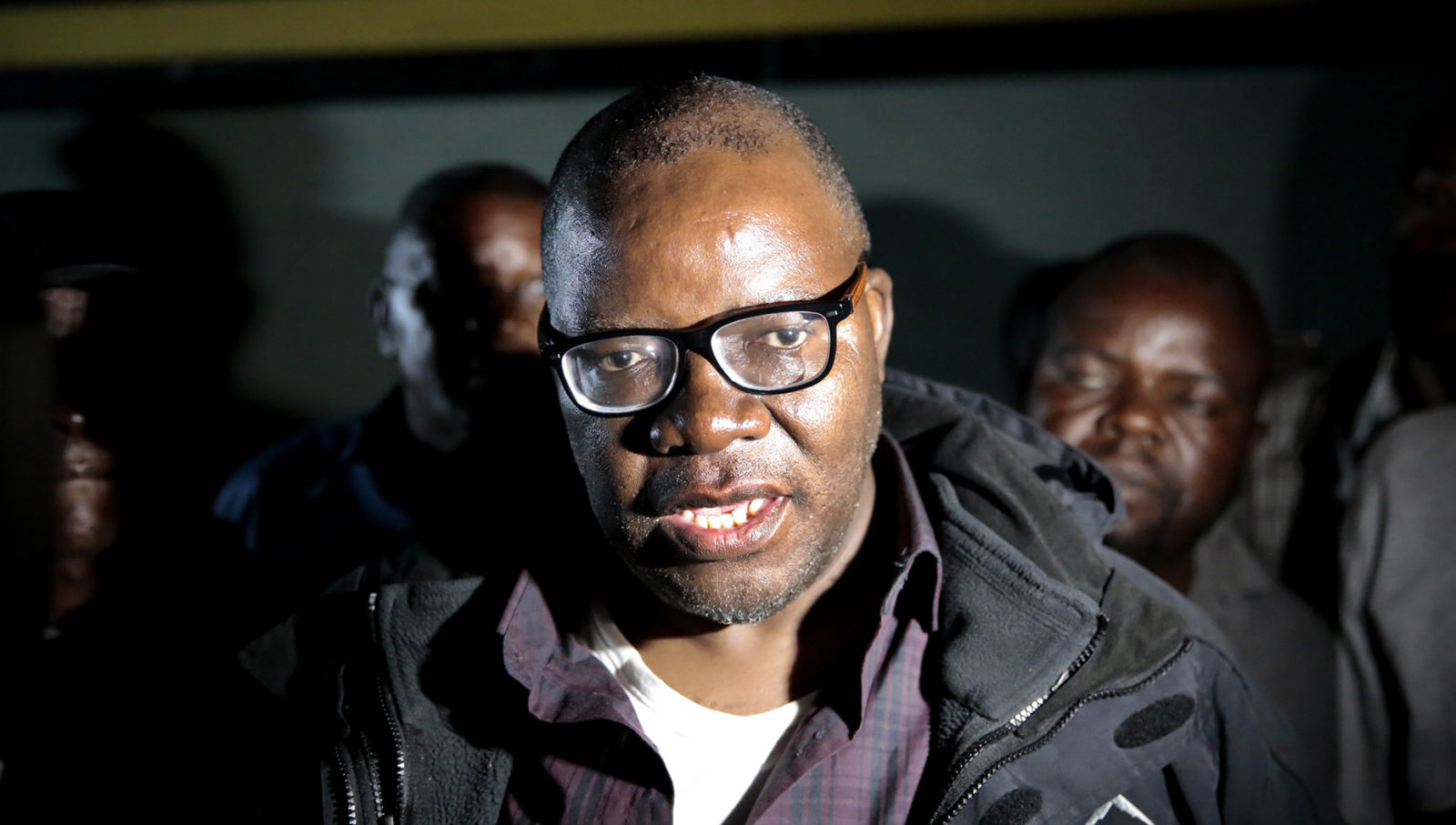 Corruption has plunged the country into its deepest and most dangerous crisis yet, says Biti. This comes after he and others in the region researched and wrote reports exposing how the state has been restructured to benefit private and state cartels spanning southern Africa and much further afield. The solution? Stronger institutions within and outside Zimbabwe.

“Zimbabwe faces the biggest existential crisis as a country because we are now run by bandits and thugs. Corruption is a bigger issue than ever before,” Biti said.

Biti is a former finance minister of Zimbabwe and a lawyer. He was a member of parliament for Nelson Chamisa’s MDC-Alliance, the main opposition party. He chaired parliament’s Public Accounts Committee which wrote several damning reports on corruption in numerous state entities. In March 2021, he was removed from parliament before he could present another of these reports.

He was speaking during a webinar focused on what is to be done about the damage wrought by corruption in Zimbabwe. The speakers described in detail how about 30 individuals have control over the state, natural resources and the military.

Regional and international cooperation to stop the illicit financial flows is key to reversing the damage to not only the country’s economy, but also its democracy.

Biti was joined by Farai Maguwu, the founding director of the Centre for Natural Resource Governance, which works with Zimbabwean communities to push back against exploitative mining companies.

“The call to fight against corruption is the greatest call of our generation. Everybody has a role to play in that struggle,” Maguwu said.

“We are fighting against very dangerous people, but we have to do it anyway and we need to have knowledge and expose corruption so that people have something to work with,” he said.

A report published by Maverick Citizen, Cartel dynamics in Zimbabwe, “generated so much debate in Zimbabwe,” he said. “The more we research, the more tools we have in this struggle.”

Maverick Citizen editor Mark Heywood was on the panel to present the key findings of the report. The report was authored by Zimbabwean academics and activists and published in South Africa anonymously as they feared reprisal from the Zimbabwean state.

The report illustrates with names, places and numbers the regional and international network of actors that control Zimbabwe’s natural resources, banks, fuel and parastatals and extract illicit financial flows from them. It shows how the state has been restructured to benefit private individuals and state officials, Heywood explained.

“Corruption is not a victimless crime. The people who pay the price of elite corruption are always poor people,” he said. “This is a human rights violation.”

The personal wealth of President Emmerson Mnangagwa is estimated at $500-million, yet the per capita income of a Zimbabwean is in the region of $900.

“Zimbabwe is a country rich in resources, but it is poor in terms of what it has been subjected to in terms of very sophisticated and sustained corruption,” he explained.

Reports on corruption in Zimbabwe “scratch the surface”, said Biti. “The issue of corruption goes much, much deeper.”

This had become more entrenched after the 2017 military coup. Biti explained that it brought in a new group of people who ensured that the state, military and private sector converged even more closely than before.

During the presidential terms of Robert Mugabe, people wanted “power for the sake of power” and everything else was secondary.

Now, the prime motive for retaining state power was to continue extraction and accumulation. “The state has simply become an arena for personal accumulation.”

Biti estimates that 82 cents from every dollar collected as tax in Zimbabwe goes to corruption. “Corruption is a cancer. It is the major cause of Zimbabwe’s fragility and instability.”

He lamented that this is prevalent in many African countries and is clear to see in the fact that they have huge resources together with huge poverty. “Zimbabwe is an extremely rich country, but it is in fact very poor – 83% of our people live below the poverty line of less than 35 US cents a day.”

Infrastructure was “decaying” – from the roads of Harare to maternal health clinics. “Corruption is taking a huge developmental toll on Zimbabwe.”

The political result of corruption was illegitimate leadership which sought to keep itself in power through rigged elections. Figures from the 1990s were still influential today, resurfacing in key political moments to keep control of the huge natural resources they had corruptly secured.

There were eight spheres of corruption in Zimbabwe. The first was the Reserve Bank of Zimbabwe and the mismanagement of foreign currency. “The US dollar has been commodified and whoever controls its import loots it.” The public accounts committee had produced a report on the bank and concluded that “this is a rogue bank which has been responsible for some of the most nefarious forms of illicit financial flows”. Private banks were also owned by members of cartels.

The second sphere was fuel. “The fuel sector is the Champions League of cartels in Zimbabwe.” For instance, the company Sekunda and parts of the Russian mafia controlled the country’s fuel pipeline as well as the wholesale companies. Mnangagwa and Glencore have interests in some of the retail companies, Biti added. This was a $2-billion industry.

The fourth sphere was commodities, such as gold and diamonds. “Right now, you can’t mine gold in Zimbabwe without paying rent to interests which are linked to Mnangagwa.” The country loses $1.5-billion in illegal gold exports, he added.

“Zimbabwe is not a poor country. Our poverty is one of leadership,” he said. Political power was used not to develop the country, but to enrich themselves.

He used the example of looting in the diamond sector. In 2008, the state used the military to massacre hundreds of people in the country’s diamond fields. It took control and allowed companies from South Africa, Ghana and China to begin mining and receive a share of the income. The diamonds were undervalued officially but sold at a much higher price.

Maguwu lamented the fact that these individuals get away scot-free with looting billions of dollars in diamonds and gold while Zimbabwean people are jailed for five years for having a few grams of gold. The judiciary is complicit, he concluded.

The fifth sphere was procurement contracts. State officials awarded these to themselves or their allies in clear violation of the relevant laws, said Biti.

The sixth was land. Land is seized illegally by the state and given to allies in the private sector, he explained. This spanned urban and rural land.

The seventh was border posts, especially Beitbridge. More than $8-billion worth of goods pass through this border post and less than $2-billion is taxed, he said.

Parastatals were the eighth sphere – providing services to one another and receiving major subsidies.

The eight spheres were controlled by no more than 30 individuals.

The private sector is not developed – the companies’ existence depends solely on the licences given by the state and are therefore not capable of standing on their own, Biti said. As a result, they kept mum. “The private sector cannot be looked at as a source of change and transformation in Zimbabwe.”

The answer lies in strengthening institutions, he said. “If we had a strong judiciary, constitutionalism and rule of law and independent elections this would solve half our problems. Regrettably, we are a long way off from strong institutions. We are in a deep, deep crisis.”

Said Heywood: “We have no choice but to reverse this corruption as citizens of the region.” In South Africa, it has been shown how effective civil society, protest and media exposure are in putting State Capture on the back foot to some degree, he explained.

There was a need for more media exposure on this issue. It needed to be put in the spotlight so people in the region “do not think that poverty and inequality is the natural order of things but see how it is being made for us by the elites and that we have to stand up against it”.

The Southern African Development Community must become a meaningful regional body with the will to stop this looting across the region, said Heywood. Regional collaboration would stop regional illicit financial flows and civil society was essential in fostering this.

“If this is not stopped, then the fate of hundreds of millions of people across southern Africa is one of perpetual poverty and deepening desperation rather than an improving environment.”

Biti argued that it is necessary to go beyond regional or continental structures and organise an international convention on illicit financial flows. This is because countries across the world are tied into the looting in African countries and states such as Russia and China have much more power than the small African states they loot, he explained.

“Zimbabwe is an extremely dangerous country right now. This means that as democrats we are going to require more help in creating the change Zimbabwe deserves. It’s a tough task.” DM/MC