Against the backdrop of civil servants in Zimbabwe threatening to go on a full-scale strike, the hard truth is that the country’s government just cannot afford to pay salaries in US dollars, as they are demanding. 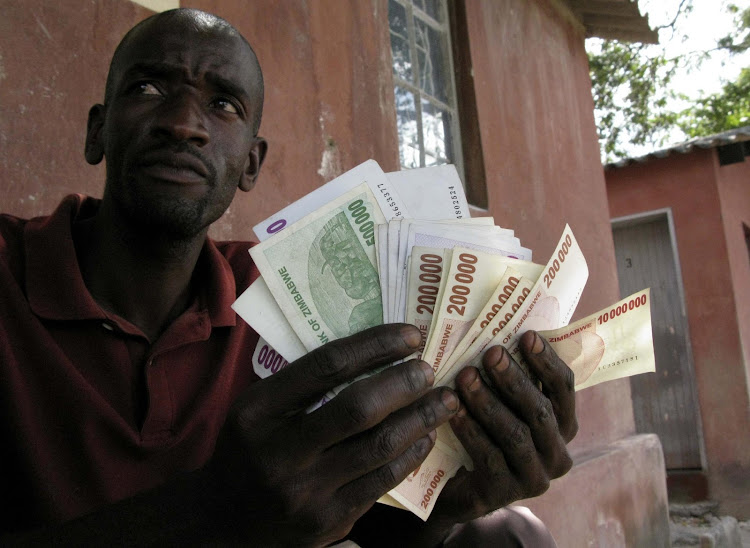 Zimbabwe’s mounting cash crisis is forcing people to use foreign currency rather than bond notes, but the government claims it cannot afford to pay civil servants in forex.
Image: Simphiwe Nkwali

But workers do not believe it.

When faced with pressing demands from striking doctors, vice-president Constantino Chiwenga, largely viewed as a hardliner in government, told journalists bluntly: “Government does not print US dollars.”

Now the chorus has grown: all government workers are demanding a review of their salaries by the end of January – but still the government is maintaining that it is incapacitated.

“In discussion with workers, government explained that it cannot go back to paying workers in USD, as in 2009. This is because the 2009 total wage bill was around $30m per month. Now it’s $300m per month. Monthly exports are around the same figure, making USD payment impossible,” said the country’s ministry of information, publicity and broadcasting.

For the ordinary man on the street, however, the rationale given by government does not make sense.

“This is a political statement meant to discourage us. It’s in the same vein as the billion-dollar mega deals we were told about during the run-up to the presidential elections. Where are they? It’s hot air!” said a mathematics teacher, who preferred not to be named.

“When dollarisation started, we were all paid a flat fee of $100. From there on, the money was increased. Government should tell us how and why within nine years the wage bill has gone up tenfold,” he added.

Economist John Robertson said Zimbabwe’s government is not bold enough to come clean at once, although it’s clear that the money is not there and there is no foreign direct investment (FDI) coming in.

“The money is not there!” said Robertson. “The primary base of the state’s taxes are in bond notes. What is merely happening is that real-time gross settlement (RTGS) systems is what reflects in workers’ bank accounts on pay day, but there is no actual money to back it up.

“We have a bad reputation out there – even borrowing is out of the picture. It’s a tough road ahead,” he added.

While the majority of Zimbabweans suffer, the economic meltdown has opened a window of opportunity for those working in the diaspora and basically anyone with access to foreign currency.

Although the government insists that the bond note is trading at par with the American dollar, on the streets $100 is equivalent to 350 in bond notes as of Monday morning. As such, those wishing to pay off bills are having a field day.

“I bought a house via mortgage five years ago and I am left with something like $25,000 to finish. That amount today is an equivalent of $7,000, so I am trading hard currency on the streets to pay it off. It’s a bargain,” said Admire Tshuma, who works for a gold mine in Matabeleland South.

A cellphone dealer in Bulawayo said: “My lease expires next month and already I was told that I can only renew it if I commit to paying the same amount I was paying in hard currency. That’s a total rip-off!

“At least if they were to reduce it and peg it to the prevailing black-market rate, I would understand – but their argument is that officially the bond and US dollar are at par, yet they don’t want to see the bond note.”

The Bulawayo City Council started implementing a 50% debt cancellation policy for those paying their bills in foreign currency, while all international organisations operating in the city are now required to pay for services in forex.