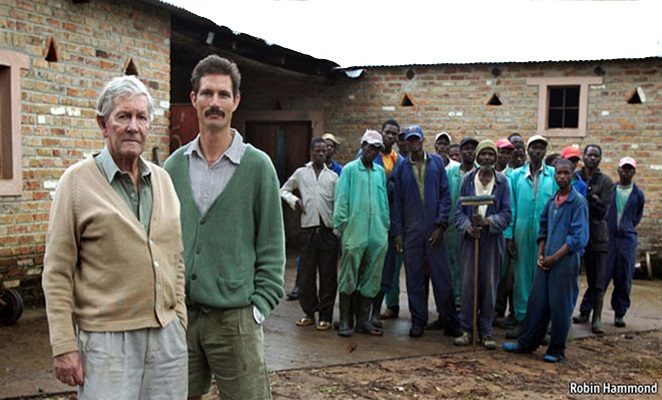 Ben Freeth (in green) and Mike Campbell (in beige) fight through the courts to stay on their land. Mt Carmer Farm, Chigutu, Zimbabwe. December 2008

Zimbabwe’s ministers of land and finance issued a joint statement 1 on the farm compensation issue on
31 August 2020, a month after the controversial signing of the Global Compensation Deed between the
government and two farming organisations on 29 July 2020.
The statement’s purported objective was to clarify the situation with regards to land tenure and
compensation since there is a high degree of confusion, both locally and internationally, with regards to
the agreement and the actual legality of the “deed”. However, the arrangements continue to remain
opaque and are cause for mounting concern.

There are three categories of former farmers listed in Zimbabwe’s Constitution of 2013, which
itself has a number of anomalies and contradictory clauses.

1. “Non-indigenous” farmers, i.e. white farmers, even though many were third and fourth
generation farmers who were totally committed to their country, had been given title to their
land and had invested extensively. Furthermore, most of the farms had been purchased after
independence in 1980 and had been issued with certificates of “no present interest” by the
government, confirming that the government had no interest in their land for resettlement.
There were approximately 4,500 commercial farmers on the land prior to 2000 when the farm
invasions began. According to the constitution, they are only entitled to compensation for
“improvements” on their farms and not for the land.

2. “Indigenous” Zimbabweans or black Zimbabweans, although the constitution avoids clarifying
this racial distinction. The government has recently claimed that 440 indigenous-owned farms
were “acquired” during fast-track land reform although no lists have been made available for
public scrutiny. According to the constitution, they are entitled to compensation for both
improvements and for the land.

3. “Foreign” farmers whose land ownership rights were covered under bilateral agreements signed
by Zimbabwe with other countries. According to the constitution, they are entitled to
compensation for both improvements and for the land.

These BIPPA and BIT properties, following high profile international court cases, have been now
been categorised as being “protected” and their owners are theoretically able to claim back their land
which was nationalised.

However, the fact remains that many of the invasions and take-overs of these BIPPA and BIT
farms – as well as numerous other commercial farms across Zimbabwe – were executed with extreme
brutality, causing severe injuries and in some cases costing the lives of farmers and their workers.
According to international law, compensation for moral damages can also apply. In the von
Pezold case, which was taken to the International Centre for Settlement Disputes (ICSID), which is part
of the World Bank Group, the ICSID Tribunal found in 2015 that the “settlers” (invaders) had kidnapped,
threatened, and physically attacked the claimants and their employees.

The ICSID Tribunal held that, even if the Zimbabwe government was not directly responsible for
these attacks, the failure of the police to prevent them over the course of several years would fall short
of a state’s obligation to provide full protection under the law.

No assurances regarding restoration of property rights

The ministers’ joint statement does not give any concrete assurance regarding restoration of
property rights – or change anything materially to bring investment and production in the agricultural
sector, which is in increasingly dire straits.

The United Nations warns that by December 2020, 10 million of Zimbabwe’s estimated 14
million population will require food aid to avoid starvation. Zimbabwe has been reliant on imports and
international food aid since 2001, the year after the farm invasions began.

Furthermore, here is nothing in this statement which brings confidence that government will
restore the rule of law, notably in respect of land title, unless white farmers, who were born in the
country and have Zimbabwean passports, are correctly re-categorised as “indigenous” according to the
internationally accepted definition.

Another key issue of contention is the fact that the government is still failing to comply with the
judgment of the regional human rights court, the Southern African Development Community’s SADC
Tribunal, in the Campbell case judgment of November 2008.

The Tribunal ruled in the Campbell case – Mike Campbell (Pvt) Ltd et al v. Republic of Zimbabwe –
that the government violated the organisation&#39;s treaty by denying access to the courts and engaging in
racial discrimination in the confiscation of land in the “ land reform” programme in Zimbabwe.
Despite a statement by the minister of lands in 2016 that the fast-track land reform programme
was over, farmers continue to be harassed and criminalised for the “crime” of farming.

One farmer known to SADC Tribunal Rights Watch has so far been in and out of court on 136
occasions regarding his precarious tenure on his farm. He, like many others, still has a jail sentence
hanging over him for committing the “crime” of farming and producing food for the country.

The reality of the land reform programme in the 2000s was that it was “politically expedient at a
time when Mugabe and his ZANU PF party were facing an unprecedented threat from the [newly
formed] Movement for Democratic Change party” 2 as opposed to the “colonial imbalances” narrative.

The US$3.5 billion compensation figure

Although the two farming organisations agreed to a significantly reduced compensation figure
of US3.5 billion for improvements for the group of largely white dispossessed commercial farmers, it is
important to note that the Zimbabwean government is broke and this money still has to be raised within
the sceptical international community.

International lending organisations are monitoring with mounting concern the widely reported
gross human rights abuses being perpetrated by the government through its armed forces, its failure to
respect the rule of law and property rights, as well as the ongoing high levels of government corruption.
Given this bleak scenario, SADC Tribunal Rights Watch does not believe that money will be
released from any of the major financial institutions, added to which is the fact that Zimbabwe’s
outstanding foreign debt exceeds US$8billion.

So long as laws and policies in Zimbabwe remain racial and hostile to property rights and
agricultural investment – and remain in contempt of the SADC Tribunal Campbell case judgment, we will
continue to see hunger and economic regression in this once-thriving African state.

Funds to encourage a productive and prosperous agricultural sector are only likely to be made
available once the rule of law, justice and property rights have been restored, the frequently brutal farm
grabs and farm attacks have ceased, and all farmers, both black and white, are encouraged back to farm
in a secure, investment-friendly environment.

Lastly, the statement reported in various media that the United States has said that
compensating farmers is one of the requirements for lifting sanctions is misleading. The US will assist
Zimbabwe to develop if there is adherence to property rights and respect for the rule of law – specifically
landmark judgments like that of the SADC Tribunal.

The US will not pour money into helping to restore the economy and agriculture if the
fundamentals are not in place according to the Zimbabwe Democracy and Economic Recovery Act
(ZDERA). Too often they have seen misguided aid that has simply cemented dictators in their positions
of power and not grappled with the fundamental issues that are the root causes of poverty and collapse.