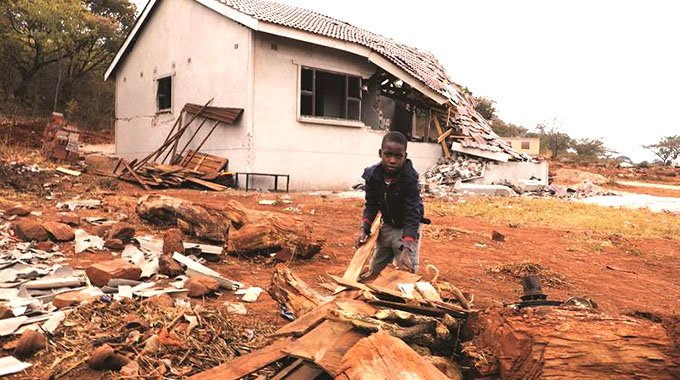 One of the houses demolished by the Zimbabwe National Army after they were illegally built in the National Heroes Acre cantonment area in Belvedere, Harare, yesterday. — Picture: Justin Mutenda

Blessings Chidakwa Municipal Reporter
More than 20 houses that were illegally built in a cantonment area next to the National Heroes Acre have been demolished by the Zimbabwe National Army (ZNA) with the endorsement of Harare City Council, almost a year after the house owners ignored a court order to move.

The houses were built on fake stands created and parcelled out by land barons in the area opposite the National Sports Stadium on land assigned to the army.

More than 100 stands were fraudulently created in the open space, with the affected house owners yesterday claiming to have bought the stands from a cooperative they declined to name. But they were unable to produce receipts or other documents showing proof of purchase, even fraudulent purchase.

A claim that the cooperative was in direct contact with Harare City Council was immediately shot down by the local authority which said it fully supported the demolitions as the houses had been built illegally.

Council said the house owners ignored a court order and repeated warnings for them to vacate.

“Council has a number of court orders to remove illegal structures. We would like to advise all people who were served with eviction orders to voluntarily move off the illegally occupied pieces of land,” said City of Harare spokesperson Mr Michael Chideme.

A visit to the site yesterday showed that among the destroyed structures, were occupied houses and incomplete buildings at various stages of construction.

There was also a crèche which was operational.

“Some corrupt land barons were parcelling out stands and selling them to desperate home-seekers. If offered a stand near the Heroes Acre, someone should ordinarily be circumspect,” he said.

One of the affected house owners, Ms Vee Maponga said: “We bought the stands from a cooperative. The company said it had submitted our names to council and we were actually expecting waiting list numbers this week,” she said.

Another beneficiary, who declined to be named, confirmed that they had ignored warnings from council to move.

“Seven months ago, there was a court order instructing us to vacate and we engaged the company which promised that

it was sorting out the issue,” said the beneficiary.

Meanwhile suspected land baron, Felix Munyaradzi, who was last month freed on $55 000 bail and other stringent conditions pending trial on charges of selling State land and unserviced stands, has been rearrested on allegations of bribing Detective Assistant Inspector Thomas Mabgwe.

Mabgwe is already facing bribery charges after being allocated two stands worth US$78 000 in the Sandton Park area by Munyaradzi.

Munyaradzi was arrested on Tuesday and is likely to appear in court soon, jointly charged with Mabgwe, over the allegations.

Mabgwe had his bail application dismissed on Tuesday by Harare regional magistrate Mr Ngoni Nduna and was remanded to September 15.

It is the State’s case that sometime in September 2015, Mabgwe, then stationed at Police General Headquarters and attached to Harare Magistrates Court as a public prosecutor, went to Delatfin Civil Engineering (Pvt) Ltd where he met director of the company, Munyaradzi.

Delatfin was allegedly involved in clandestine sale of residential stands and double allocation of stands at Hydon Farm in Harare and this resulted in a number of civil suits and criminal matters.

In a bid to get protection against pending criminal cases, Munyaradzi allegedly gave Mabgwe two stands valued at US$78 000 and an agreement of sale was reached between the two.

The State alleges that Mabgwe had no right to receive any consideration or gift from Munyaradzi.