Zimbabwe is about to become a colony again 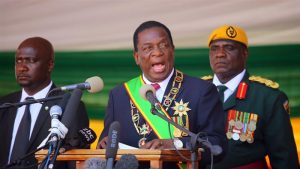 Source: Zimbabwe is about to become a colony again – The Zimbabwean

‘The Zimbabwean’s’ Own Correspondent is absolutely right to warn Zimbabwe (as well as all Africa) of the dangers of China’s colonising activities:

In this article, we are extending his warning to Western de facto colonialism which still wields immense power over all Africa’s 54 nations.

This is not the old style political colonialism, but one we call Commercial Colonialism: the control exercised by powerful foreign (mainly Western and Chinese) commercial and financial interests pan Africa. Independence did not end all colonialism, only politicalcolonialism or colonial government. But Commercial Colonialism merely carried on uninterrupted, and not only is it is a major factor in continuing poverty in Africa, but also in helping to keep all Africa’s corrupt, oppressive governments in power – and that is most of them.

At the moment, Western Commercial Colonialism is not as prominent in Zimbabwe as in most other African countries. One of the few good things Mugabe did was to greatly reduce Western or White control over businesses in Zimbabwe (but he made a massive error in not ensuring they were replaced by strong, viable Black Zimbabwean businesses, most prominently in agriculture, and it is that which caused Zimbabwe’s economic meltdown).

However, the situation is about to change. Mnangagwa’s drive for Western investment to rebuild Zimbabwe will open the doors to Commercial Colonialism in Zimbabwe unless he ensures that this investment will actually benefit ordinary Zimbabweans. This must be specified because the way it has been used pan Africa so far has been incredibly counterproductive to the vast majority of Africa’s citizens, and largely benefits only the mainly corrupt elite and a tiny percentage of Black African businesspeople.

About to exacerbate that is Theresa May’s current tour of Africa, pledging to heavily promote the UK’s business and financial interests in Africa. However, very noticeably, she said nothing about helping Africa to export more to the UK and, according to the BBC, ‘she was “unashamed” that it had to work in the UK’s own interest’.

If our warning sounds like scaremongering or a conspiracy theory, it is supported by the AU in its Agenda 2063 The Africa We Want. The AU is absolutely clear and unequivocal that NO African nation can progress at the rate required to catch up with the West unless Commercial Colonialism is destroyed. It wants all foreign (mainly, of course, Western and Chinese) aid cut by 75% by 2023 – only five years away – and African investment to replace 75% to 90% of all foreign investment. And it wants Africa to become ‘self-reliant’ (i.e., to become free of foreign dependency – again of course mainly the West and China), using such statements as:

‘Africa financing its own development’

And the AU shows African nations exactly how to achieve this.

The vital point about Agenda 2063 is that every African nation including Zimbabwe has signed up to it. Yet our government is totally ignoring it.

Far from Commercial Colonialism helping to eradicate poverty, it has actually helped to prolong it for far longer than it should have done.

First, many Western MNCs could have paid their African staff and workers the same rates as their employees in the West many years ago – some from as long ago as our Independence. Or, if they genuinely were unable to pay full Western rates, at least a great deal more than they do now. In fact, if they attempted to pay their employees in their own countries as badly as they pay us in Africa, they would be prosecuted for breaking the law.

Western investments also are based on paying Africans at poverty rates. When David Barber, one of the authors, attempted to set up a business in two African countries based on paying African workers and staff at Western rates (as opposed to African poverty rates), all investors INCLUDING AFRICAN ONES refused to back him, even though most of them were prepared to do so if he agreed to pay typical African poverty wages. Both governments also forced him to give up his attempts.

Western MNCs and investors are assisted in this exploitation by the UN, the World Bank, the IMF and the World Trade Organization (WTO), any one of which could stop this any time they wanted to.

In fact, and very much more worryingly, Western NGOs, the UN, the World Bank and the IMF – the organisations most dedicated to ending poverty in Africa – also pay Africans far less than Westerners.

Second, Commercial Colonialism is actively helping to keep Africa’s corrupt, oppressive governments in power – and this is most of them. Yet, of course, these are the governments least interested in taking their citizens out of poverty, and the West knows it.

On top of that, we have received huge sums of money and aid from Western NGOs and China. Just for 2016-2018, China promised us 4 billion US dollars.

SO WHERE HAS ALL THAT MONEY GONE?

Far from ‘Western imperialism’ causing our problems, it has been remarkably generous to us, and it continues to be so. The only thing that went wrong is that we, the citizens of Zimbabwe, did not see the money because Mugabe and other corrupt people in our country took it.

The reason the West and China support the worst possible governments we could have is to preserve the status quo at all costs, because that is vital to their continuing exploitation of us.

It is also well-recognised that the only thing corrupt, oppressive governments cannot stand against are prosperous business, middle and working classes because they simply will not tolerate such governments.