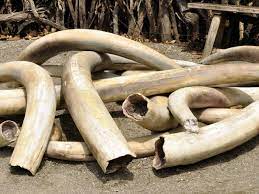 Zimbabwe’s aggressive lobbying to overturn a global ban on the sale of ivory has raised more questions than answers with conservationists arguing that the country’s claims that it has stockpiles worth US$600 million are an exaggeration.

The southern African country is hosting a three-day conference where it invited 15 nations to push for the legalisation of ivory trade to finance conservation efforts.

Ahead of the conference, the government showcased its ivory stockpiles at a warehouse just outside the capital Harare to European Union diplomats where officials said the country had the potential to earn US$600 million if it is allowed to sell the stocks.

The position, however, is proving to be a tough sale for some conservation experts attending the conference being held at the Hwange National Park, Zimbabwe’s biggest game reserve, which is home to the largest population of elephants in the country.

A number of conservationists said Zimbabwe’s claims did not make sense given the fact that the highest price for worked ivory on sale in the market around 2015 was US$ 2 100 per kilogramme, and the price has since crashed. The wholesale price of raw ivory is estimated to be US$150 per kilogramme.

At that price, even if Zimbabwe were able to sell its entire 130 tonnes of stockpiled ivory, it would earn only roughly US$20m.

Zimbabwe has threatened to quit the Convention on International Trade in Endangered Species (CITES) if the trade ban is not lifted.

CITES banned the sale of ivory in 1998 to save elephants from extinction due to widespread poaching.

“The figures don’t make sense,” said a South African conservationist on the side lines of the conference.

“Most of these countries are using a rate, which was set in 2008 and it was quite high at US$167 per kilogramme, but figures have gone down because the (Asian) countries they are targeting (as the potential markets) bought the ivory at that time and they are still consuming the old stock.”

The conservationist said the formal ivory markets that countries such as Zimbabwe were targeting were saturated.

China, which used to be the biggest buyer for legal ivory, has banned all trade, as has Vietnam.

Japan, which bought ivory in the past, still has large amounts from earlier one-off sales.

“These Asian countries that they are targeting have no room for extra stocks,” he added.

“The other observation is that these countries are evaluating their stocks using pricing that is exaggerated and that on its own has created some confusion.”

Another southern African conservationist said countries should be focusing on reforms within CITES to help fund conservation work.

Leaving CITES would not allow them to sell ivory as buyers would also have to leave the international organisation, which would affect trade in many other wildlife and plant species.

“There is no money from these governments to deal with conservation, so it’s a question of them asking where they can get money,” he said.

“Zimbabwe has threatened to withdraw from CITES if not heard, but the challenge with that is that they can be selling those stockpiles illegally and the Asian buyers that they are targeting that is China, Vietnam, Japan are members of CITES.

“The danger is that those countries (who are potential buyers) should also pull out (of CITES) so that they both illegally trade, and such will have implications on the credibility of the state.

“Countries should have other ways of making money, whereby they can go through issues of quantifying their carbon sale and we believe that they can get something larger than what they are advocating for in the sale of ivory at a price that is unapproved.

“Most of these countries have issues with their economies so they are hoping that if they sell some of the money will go into conservation and addressing human-wildlife conflicts, but they have not told us how they want to use the money in a way that’s transparent and convincing apart from saying they want to sell.”

“The value of a kilogramme is usually US$15 000, and I don’t know the values that others have, but irrespective of that figure I am talking about all we are saying is we want to unlock the value of that same stock-pile we have,” Mangwanya told VicFallsLive at the conference.

“We want to eat what we should, so this is what we are pushing especially after Covid-19 which has ravaged everything, and the revenue streams are dry.

“So the best we can do is to leverage on the stockpiles that we have because they have so much value in the markets.”

He said there were countries that were ready to buy Zimbabwe’s ivory.

“If the ban is lifted Asian countries are actually interested in our ivory,” Mangwanya added, without naming which countries he was referring to.

“It’s not a secret that the market is still there and we are only being blocked by CITES.”

One Kenya-based conservation source highlighted that China closed its market on the order of its central government, not because of CITES.

“It is a major distraction from the real issues of conservation finance to suggest ivory can be sold again,” he said.

“China will not open its markets again, so any sale is only going to finance the illicit trade that spurred the poaching surge a decade ago.”

Zimbabwe says its elephant population has become unsustainable because of good conservation programmes.

Southern African countries have in recent years seen their elephant populations grow significantly and they are now home to about 70 percent of Africa’s elephants.

Zimbabwe is estimated to be home to 100 000 elephants, the second highest population after Botswana, and the wildlife authorities say the figure is double what the country’s game reserves can hold.

Zimbabwe last month said 64 people were killed by wild animals since the beginning of the year.

Mangwanya said with more money to fund conservation, the country would be able to prevent the deaths.

“Whichever figure comes with the same funds; we want to unlock the value so that we use the same funds to improve the livelihoods of the 55 districts of communities who are living with the animals,” he said.

“Countries without species like elephants should not comment about it as long as they are not directly affected because these are issues that we are trying to put across and we expect the same to be accepted at CITES if we don’t have unnecessary opposition from our brother and sisters’ African states.”

A group of 50 anti-ivory trade organisations warned that opening the ivory market would pose a serious danger to the African herd.

“The conference is sending a dangerous signal to poachers and criminal syndicates that elephants are mere commodities and that ivory trade could be resumed, heightening the threat to the species,” the groups said. -VicFallsLive