The education sector in Zimbabwe has been rapidly deteriorating, yet the government is unmoved. This year, because of Covid-19 and striking teachers, most learners have had no teaching at all. Inequalities in education have widened and education is becoming a luxury most people can’t afford. What will happen to Zimbabwe’s children? 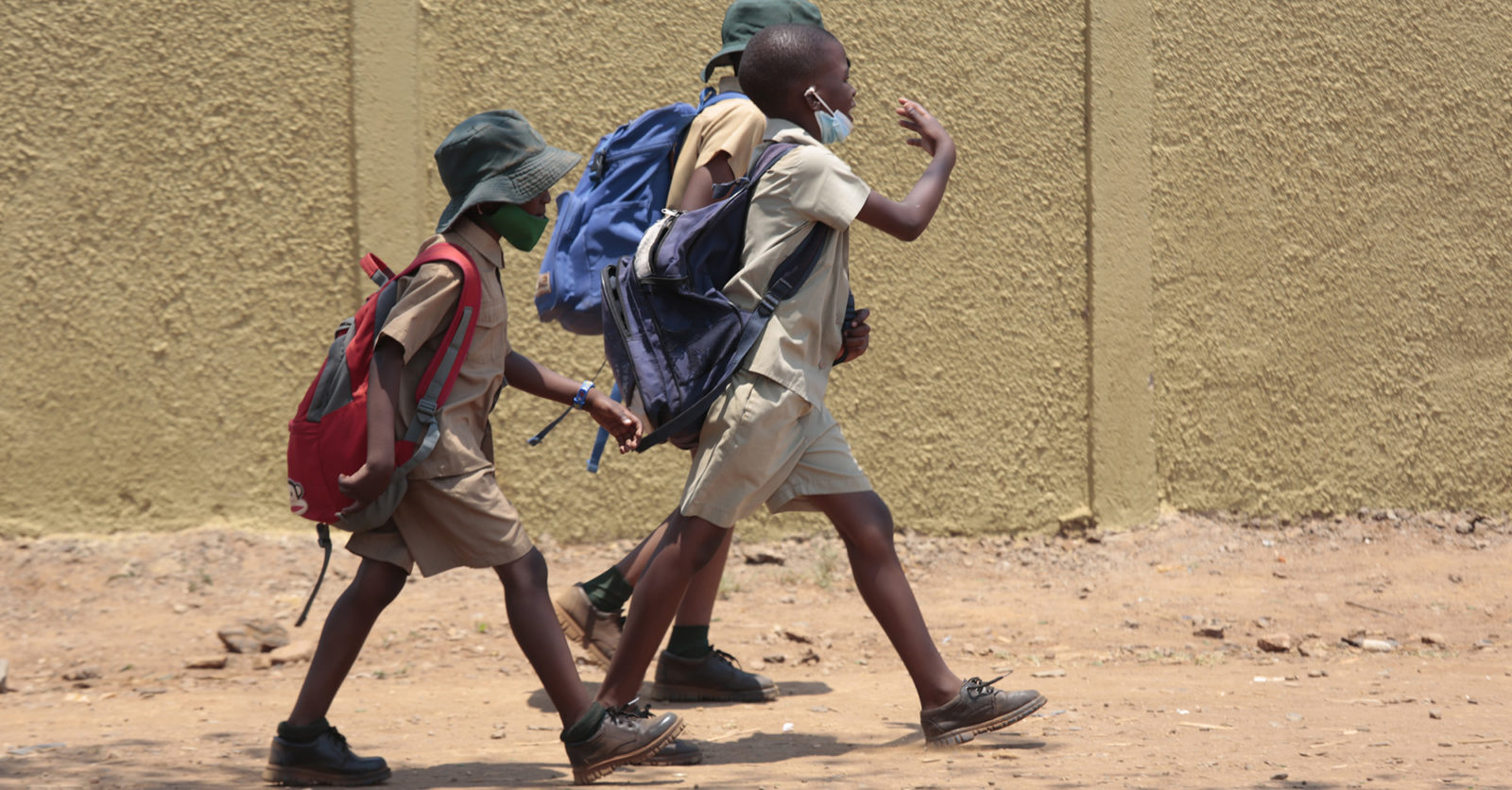 The education sector in Zimbabwe has been rapidly deteriorating, yet the government is unmoved. This year, because of Covid-19 and striking teachers, most learners have had no teaching at all. Inequalities in education have widened and education is becoming a luxury most people can’t afford. What will happen to Zimbabwe’s children?

In January 2020, teachers in Zimbabwe did not go back to work when schools opened. They said they were incapacitated, they did not have transport money to go to and from work and they did not have any money to buy meals to eat at work. They also said they could not afford to clothe themselves for work.

There were endless negotiations between the several teachers’ unions in the country but despite the back and forth, teachers and their employer (government) failed to reach a suitable compromise. Teachers decided they would go back to school, but they would only go on certain days. Some schools had lessons just once a week, others twice a week and the lucky ones got to have lessons on three days of the week.

The first school term of each year is important as that is when students in new grades are introduced to new syllabi and concepts. It is in the first term that students are introduced to new teachers and must familiarise themselves with those teachers’ teaching styles. It is in the first term that teachers familiarise themselves with new learners and adapt to their capabilities, deficiencies and learning styles.

Zimbabwean students and teachers did not go through this process in 2020.

Instead, the government through its state media – newspapers, radio and television – ignored the strike by pretending nothing was happening. They wanted to portray an image that all was well.

Children at private schools, however, were going to school as normal from January 2020.

In March 2020, due to the Covid-19 outbreak, the government issued a directive to close schools.

President Emmerson Mnangagwa’s administration announced on 22 September that students sitting for Grade 7, Ordinary and Advanced Level Zimbabwe Schools Examinations Council (Zimsec) examinations would be required to return to class on Monday 28 September to start preparations for their final examinations. All other grades returned on 9 November.

The government announced that universities, colleges and schools were to hold lessons virtually during the lockdown period and there was an outcry from parents and students about how that was an impossible feat for students in the rural areas and poor urban dwellers who, even if they had smartphones, could not afford to buy data for their children to participate in virtual lessons.

In a bid to again portray a false image of normality, the government introduced radio lessons. These failed dismally to address the challenge as, again, rural learners were excluded as many have no radios or even electricity.

This means that between March and November 2020, the majority of Zimbabwean learners had no access to education.

During the same period, however, children in private schools were learning via the various online learning methods such as ZOOM and Google classroom. They were able to have virtual lessons and to do classwork and homework and submit assignments to teachers for marking.

The opening of schools on 9 November brought with it myriad challenges. Teachers again announced they were incapacitated, citing the same reasons as at the beginning of the first term. The government offered a 40% salary increase which teachers rejected and called a mockery. They vowed not to return to school until they were paid a decent living wage.

The 40% increment would have led to teachers earning ZW$18,237 (about R2,500). Teachers demanded at least US$520 (around R7,900) which is what they were earning before the government reverted back to the local currency.

The government threatened to fire striking teachers and replace them with unemployed teachers desperate for work. One of the teachers’ unions, the Zimbabwe Teachers Association (ZIMTA), agreed that their teachers would return to work leading to an exodus of teachers from the union as they believed the union was no longer serving their needs.

Other unions held fast and refused to go back to work until their grievances were met.

Some teachers have gone back to work out of fear of victimisation as well as unemployment, but the majority just go to check in, but not teach. The government is fine with that situation as all it wants is to portray an image of normality, even at the cost of education.

Children of most of Zimbabwe’s elite attend private schools and have not been affected much by the teachers’ strikes and by Covid-19. Government officials in Zimbabwe also send their children to private schools, which could explain why they are neglecting the plight of public schools. Teachers and parents who speak out about the death of education in the country are victimised by the government and accused of being “regime change agents” who are paid by the West to destabilise the country.

The education sector in Zimbabwe has been rapidly deteriorating and the government is unmoved.

In 2019, several schools reported a zero percent pass rate. This was shocking and when I interviewed teachers from affected schools they said they did not have enough teaching materials. They had no textbooks at schools and parents could not afford to buy textbooks. They also said many students could not afford to pay school fees which made the running of schools difficult.

In one school, the headmaster explained that most of their students could not afford exercise books so they could not make notes, they could not write down classwork and homework, making it difficult for students to remember concepts and for teachers to assess progress.

A teacher at another school explained that some of her students walked up to 15km to get to school. She said many of her students were too tired or hungry to learn as most of them walked these distances on empty stomachs. She said their school used to get donations of porridge and beans and learners could at least have a meal a day at school, but the school was no longer getting those food donations. She explained that the teachers were not motivated either because they too were hungry.

There is a crisis in education in Zimbabwe and the government is turning a blind eye. Covid-19 has made things worse with many schools closed due to a spike in Covid-19 infections. Schools were opened despite teachers explaining that they did not have adequate PPE and that most schools had no capacity to adhere to Covid-19 requirements. Learners in most schools have to share scarce resources such as textbooks and desks so physical distancing is almost impossible.

Due to water shortages, many schools have no running water so it is difficult to ensure consistent washing of hands. This is exacerbated by the shortage of funds to purchase hand sanitisers. Most parents cannot afford to buy their children PPE or hand sanitiser. To portray an image of normality, and to pretend there is no crisis in Zimbabwe, the government opened schools and the Zimbabwe School Examinations Council (ZIMSEC) announced examination dates.

Teachers and parents protested against the move to make learners write final examinations when the entire education year had been lost due to Covid-19 and the incapacitation of parents, teachers, schools and learners.

How can students who had not learnt anything since January write exams? How can exams proceed when many schools have been forced to shut because of Covid-19 outbreaks? Who will invigilate the exams considering that most teachers are on strike? How will physical distancing be managed, seeing as many schools do not have enough furniture and not enough classrooms?

Robson Chere, the secretary-general of the Amalgamated Rural Teachers Union of Zimbabwe (ARTUZ), says they have launched a campaign to help save education as the government is failing to prioritise this sector in Zimbabwe. He says education has been privatised, taking it out of the reach of most families.

Children of most of Zimbabwe’s elite attend private schools and have not been affected much by the teachers’ strikes and by Covid-19. Government officials in Zimbabwe also send their children to private schools, which could explain why they are neglecting the plight of public schools. Teachers and parents who speak out about the death of education in the country are victimised by the government and accused of being “regime change agents” who are paid by the West to destabilise the country.

What will happen to Zimbabwe’s children as the government buries its head in the sand and ignores the plight of education in the country?

Education is a basic human right and to pretend all is well in the education sector, when nothing is well, is a human rights abuse. It is also unjust to have a situation where only children of the elite have access to quality education. All children deserve equal opportunities, especially in education. DM/MC