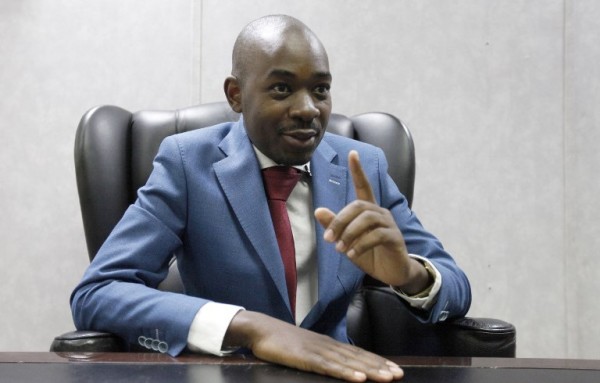 File: Zimbabwe opposition leader and President of The Movement for Democratic Change (MDC), Nelson Chamisa gestures during an interview with AFP in Harare, on July 3, 2018. Photo: Wilfred Kajese / AFP

HARARE – Zimbabwe’s main opposition leader and presidential hopeful Nelson Chamisa believes he will ride a wave of youthful optimism to election victory, emulating Barack Obama, Emmanuel Macron and Justin Trudeau.
In an interview with AFP, the 40-year-old Chamisa said Zimbabweans were craving generational change in the landmark July 30 elections. The vote will pitch him against President Emmerson Mnangagwa, a septuagenarian who was once a pillar of the Mugabe regime.”People are connecting with young leadership,” Chamisa declared.”The world is moving… young people are taking charge, look at France, look at Canada, look at New Zealand — look at the United States,” he said.Barack Obama became US president aged 47, Justin Trudeau became Canadian prime minister at 43 while France’s Emmanuel Macron became president at just 39.

Chamisa has led the Movement for Democratic Change (MDC) since the death of his mentor and predecessor Morgan Tsvangirai in February.

He will face off against 75-year-old Mnangagwa, whose ZANU-PF party — which has ruled Zimbabwe since independence 38 years ago — has sought to portray Chamisa as a political novice.

“I’m happy that they are accusing me of being young, it’s an offence that I take,” said Chamisa from behind an Apple laptop in his office overlooking Harare’s Africa Unity Square.

The public space was once a site of major protest against former president Robert Mugabe, 94, who ruled for 37 years in which he clamped down hard on his political opponents.

‘Change is in the air’

“Change is in the air — it’s almost everywhere,” Chamisa said, suggesting that Mugabe’s exit from public life was “the beginning of that change”.

Mugabe resigned in November after an unprecedented military challenge to his rule that saw armoured personnel carriers on the streets of Harare and drew accusations from some observers that Zimbabwe had suffered a coup.

The army, which took control of state TV and parked its tanks in front of parliament, denied it was seeking power and insisted it was performing an operation targeting “criminals” around Mugabe.

That was largely accepted to mean his wife Grace and her “G40” faction which backed her to succeed Mugabe as president over his former deputy, Mnangagwa.

Within days, Mugabe stepped down as head of state, hounded out by the once-loyal ruling party.

“People are very clear on their choices, they know that (Mnangagwa) represents the past with myself representing the future,” said Chamisa who beamed confidently and wore a charcoal suit and a burgundy tie.

But Chamisa and his MDC party face an uphill battle to win the all-powerful presidency.

The opposition has been riven by division since Tsvangirai’s death with several MDC splinter groups emerging, threatening to dilute Chamisa’s share of the vote.

Polling has also suggested that ZANU-PF still enjoys strong support in its northern heartland and in some rural areas.

Chamisa alleged that irregularities in election preparation, particularly linked to the electoral roll and ballot printing, could thwart his ambition to take the presidential oath.

‘Fallen for the ruse’?

“Whereas in the past we have seen overt and flagrant violation of human rights, what we are seeing is almost a subtle, subterranean approach,” he said.

Chamisa alleged that issues with the voter roll and ballot papers were examples of “technical violence” and accused the Zimbabwe Electoral Commission of “manipulating the processes”.

“But we are still very optimistic — once we have the printing of the ballot papers in a manner that is transparent, we are going to win hands down,” he said.

The international community is hoping that the presence of foreign observer teams, including a European Union mission for the first time in 16 years, will ensure a fair vote.

But Chamisa accused some observers of being seduced by Mnangagwa’s pro-democracy “rhetoric”.

“We feel that they have fallen for the ruse, that they have been sold the dummy that Mr Mnangagwa is ready for free and fair elections when in fact he is not,” he said.

Chamisa warned that his party would seek to “stop any process that is illegal”.

“We won’t allow any repeat of the elections where they cheated my predecessor,” he said referring to several previous polls that were widely condemned for being rigged.

Deadly attacks on MDC supporters in 2008 forced Tsvangirai to withdraw from the second round of voting, handing Mugabe victory.