ZIMBABWE: PS staff ‘too poor to get to work’

Source: ZIMBABWE: PS staff ‘too poor to get to work’ | PS News 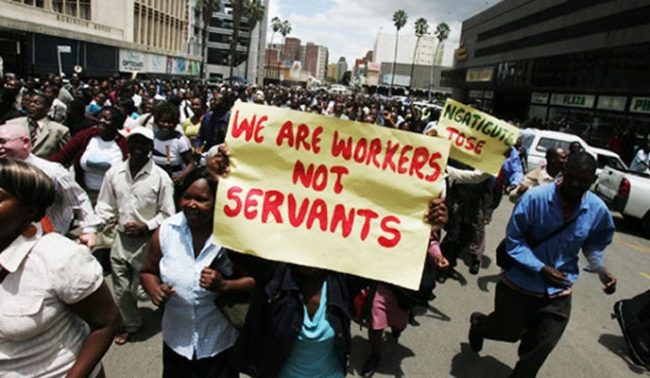 Public Servants in Zimbabwe have told the Government they can no longer report for work because they have insufficient money to commute.

The latest move in the country’s long-running dispute between the Government and its bureaucracy came when the Apex Council, representing all PS employees except those in the security and health sectors, delivered the ultimatum to President, Emmerson Mnangagwa.

It comes at a time when junior doctors at Government hospitals are already on strike, demanding a review of their salaries in line with the prevailing interbank exchange rate.

The doctors say their current fixed salaries are too quickly eroded by inflation, which the International Monetary Fund has estimated is running at 300 per cent annually.

The Apex Council said the notification of inability to work did not amount to a strike, but nevertheless urged the Government not to victimise any worker who failed to report for duty due to lack of money for transport.

“This declaration is meant to protect those of our number, who are the majority, that at any one time they may find themselves unable to proceed to work because they have no money for transport, food and accommodation and more,” the Apex Council said.

It stressed that Government workers should not borrow money for transport as it was the responsibility of their employer to adequately provide such funds.

The Apex Council statement noted that inflation had eroded the average PS employee’s salary from A$730 in 2018 to A$58 today — “and it is declining further every day”.

“We are the only people carrying the burden of austerity … our salaries are first taxed by the employer, then the Reserve Bank of Zimbabwe and more steeply by mobile money agencies,” the Apex Council said.

“We cannot bear the burden of austerity on our own.”

In August the Government suspended publication of annual inflation figures until February 2020, arguing the move was meant to avoid miscalculation of the country’s inflation rate.

In what is being seen as an attempt to appease PS employees, the Government has announced it will pay them full end-of-year bonuses pegged on gross income — a departure from last year, when the so-called thirteenth cheque was based on pensionable salaries.

There was widespread anger last year after the bonuses workers were paid reflected only the basic salary without allowances being factored in.