Zimbabwe Puts Another Nail In An Increasingly Crowded Keynesian Coffin

Zimbabwe has neither a problem of insufficient demand nor insufficient “money supply” as the twin ideologies that are Keynesianism and Monetarism contend. 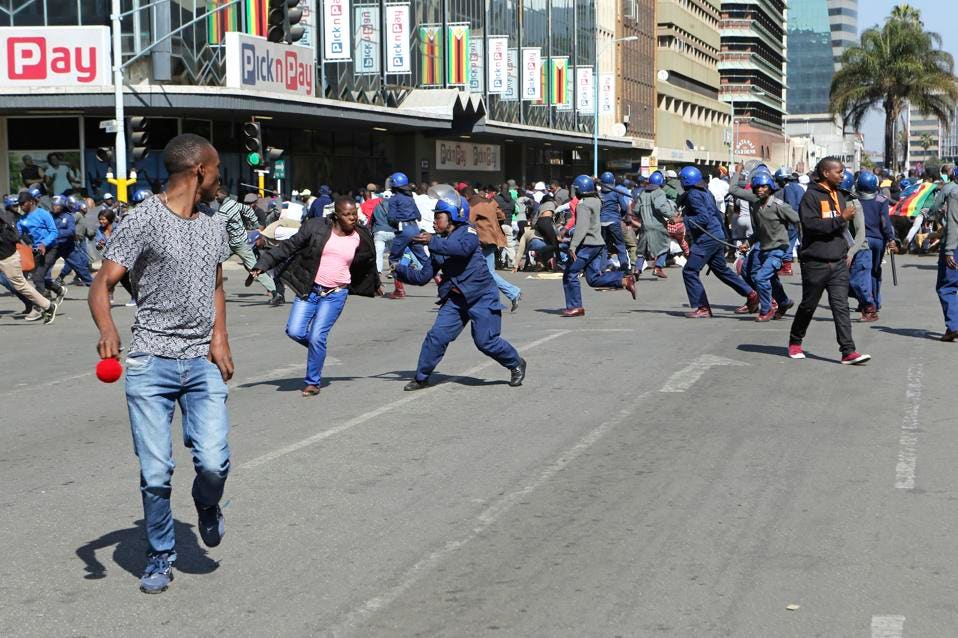 Riot police arrest and forcibly apprehend protestors during protests in Harare, Friday, Aug. 16, 2019. The main opposition Movement For Democratic Change party is holding protests over deteriorating economic conditions in the country as well as to try and force Zimbabwean President Emmerson Mnangagwa to set up a transitional authority to address the crisis and organize credible elections. (AP Photo/Tsvangirayi Mukwazhi)

Where are the Zimbabweans? According to Financial Times reporter Joseph Cotterill, millions can be found in neighboring South Africa, along with other more economically vibrant locales. Cotterill notes that the Zimbabwean “diaspora” is the result of “decades of turmoil” within the formerly prosperous country.

That more and more Zimbabweans exit their country in order to work rates discussion in consideration of how all too many economists and politicians think of economic growth. According to those with a Keynesian orientation, it’s consumption that powers growth. Others, of the monetarist persuasion, believe that growth in so-called “money supply” is what keeps the economy moving. Neither religion acknowledges that both consumption and money aren’t instigators of growth as much as they’re a consequence of it.

If consumption and soaring money supply were certain growth ingredients, prosperity would be simple. Politicians could demand that the citizenry consume more, and to enable the buying, they would instruct a central monetary authority to boost money in circulation. Of course to anyone with a pulse, such a scenario would fail with blinding speed. Most of us intuitively know that our ability to consume is a function of our ability to produce. To pretend otherwise is the equivalent of assuming the only difference between Lake Forest and Cabrini Green is that government-engineered money supply increases in the former enable greater consumption than takes place in the latter. No, money supply is abundant in Lake Forest, and so is consumption, precisely because the residents of Lake Forest are rather productive. Zimbabwe instructs on the matter.

According to Cotterill, remittances from Zimbabwean expats account for at least $1.9 billion worth of GDP, or 9.6 percent. Zimbabweans are able to consume more and more thanks to production of Zimbabweans not working in Zimbabwe. This is an important distinction to make. Paul Krugman argues endlessly for increased government spending to boost economic growth, but does so without acknowledging that the growth already occurred. Governments can only spend insofar as economic growth showers them with revenues to spend. Production first, then the spending.

To Keynesians like Krugman, the answer is always more outlays from politicians. If there’s consumption, prosperity will ensue. Zimbabwe is a reminder of how unrealistic such a belief is. No doubt Zimbabweans are able to consume wealth to a greater degree than they produce wealth, but this ability to buy in greater amounts isn’t thanks to magic; rather it’s a consequence of the productivity of Zimbabweans toiling outside of the country. To be clear, there’s no such thing as consuming. Behind every act of consumption, whether it’s government enabled or enabled through remittances, is an act of production first.

Readers might consider the above the next time they witness some economist or politician on TV talking about boosting the economy through more government spending. They’re confused, or they’re lying. They can do no such thing. The consumption they aim to generate through government largesse is only possible insofar as private actors produced the wealth first. Government spending can’t stimulate growth as much as government can arrogate to itself the right to allocate wealth already created; usually at the expense of entrepreneurs and businesses. Never forget that entrepreneurs compete with consumers (private individuals, along with governments that confiscate wealth in order to shift consumption to others) for always limited resources.

Considering money, it too has no use absent production. Money can’t be eaten, or slept with; instead money is just an agreement about value among producers, along with those empowered to consume as producers do thanks to shifts of money. In Zimbabwe’s case, money has use there to a high degree because of production that doesn’t take place there. As Florence Ncube explained it to Cotterill, there “is no food that side,” as in little food produced in Zimbabwe. Groceries are purchased in South Africa, and then sent to Zimbabwe. Money supply can be found in Zimbabwe not because some central bank decreed it, but once again because of production that didn’t place in Zimbabwe. Money earned outside of Zimbabwe, and goods and services produced outside of the country, give money a purpose in Zimbabwe.  Production first, then money supply. Monetarists, like Keynesians, get the drivers of economic growth backwards.

Readers might remember this the next time some wise pundit or economist in a developed country laments impossibilities like “money shortages” or “insufficient money supply” in countries they don’t live in. The reality is that money, like consumption, is a consequence of production. Where there’s production there will always be abundant money to facilitate exchange of it, and where there’s little production is where money will always be scarce. Politicians and central bankers can’t alter economic reality through magic despite what we’re told.

Bringing it back to Zimbabwe, it has neither a problem of insufficient demand nor insufficient money supply as the twin ideologies that are Keynesianism and Monetarism would contend. What really ails Zimbabwe is a lack of production; the latter increasingly being made up for by enterprising Zimbabweans living and working outside their home country.