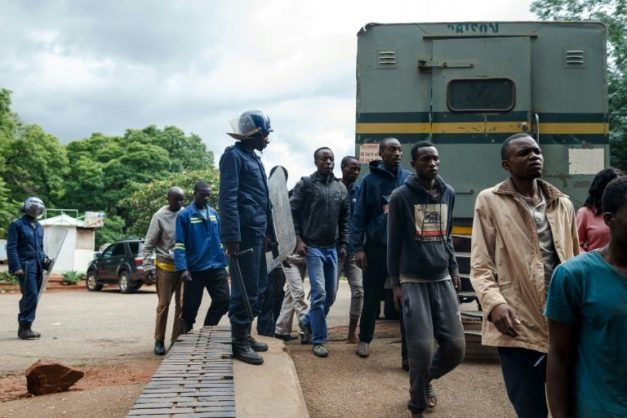 Zimbabwean anti-riot police forces watch men arrested during violent protests triggered by a sudden rise in fuel prices announced by Zimbabwean president, before their hearing at the Law Court in Harare on January 16, 2019. Picture: AFP/File/Jekesai NJIKIZANA

The Crisis in Zimbabwe Coalition today warned of “greater chances of escalation of social unrest and instability” if the volatility in that country was not adequately addressed.

Addressing journalists in Johannesburg, the coalition’s regional coordinator, Blessing Vava, said while there was a national outcry over the deteriorating economic situation in Zimbabwe, there was also an apparent attempt by the state to silence dissenting voices through arbitrary arrests, beatings, abductions and threatening civil society leaders and unionists.

“There are arbitrary arrests, detentions, torture and enforced disappearances and fast-tracked trials and convictions. The Zimbabwe Lawyers for Human Rights has handled over 800 such cases and accused persons are not enjoying the right to fair trial as prescribed by the law,” said Vava.

Despite calls for a national dialogue by President Emmerson Mnangagwa, false accusations and charges continue to be labelled against civil society leaders and labour. There is clear insincerity on calls to engage in a dialogue.

An environment conducive to dialogue was needed, he said, which would entail the immediate release of political prisoners who were facing “trumped up charges”.

Cases must also be conducted in line with the law to afford accused persons the right to fair trials, he said.

“Zimbabwe must immediately return to the rule of law.

“[We are also calling for] the immediate removal of the military from conducting policing duties and an immediate halt of the state sponsored violence on citizens.

“The state media must desist from fuelling human rights abuses and further polarising society. Zimbabwe must immediately return to a peaceful environment that allows for honest and genuine dialogue.”

The coalition called on regional bodies, particularly the Southern Africa Development Community (SADC) and the African Union (AU) to support and guarantee an internal and inclusive stakeholders’ dialogue.

“The SADC and the AU must promote and support efforts at arresting the economic downturn in Zimbabwe based on a clear reform roadmap and encourage Zimbabwe to adopt and implement pro-poor and inclusive economic policies.

On Tuesday, the Zimbabwe Communist Party (ZCP) said it was ready to participate in engagements aimed at rebuilding the nation, following a call by Mnangagwa for a “national dialogue”, but called on the government to first release all detained activists.

Mnangagwa this week promised to investigate the conduct of security forces that terrorised citizens amid protests sparked by a massive fuel price increase two weeks ago. He said the violence by the security forces was “unacceptable and a betrayal of the new Zimbabwe”.

“Misconduct will be investigated. If required, heads will roll,” Mnangagwa said on twitter.