Zimbabwe: Teachers’ union and government in deadlock over wages

Economic woes worsened by COVID-19 pandemic and Russia-Ukraine war have led to a deadlock between teachers and gov’t. 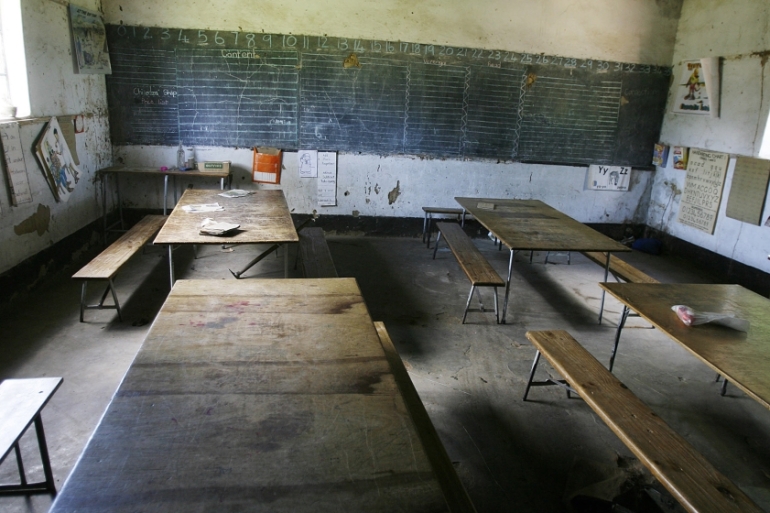 Mutare, Zimbabwe – By morning, Gaudencia Mandiopera works as a primary school teacher at one of the public schools in Mutasa district, 283km (176 miles) southeast of the Zimbabwean capital, Harare. From early afternoon till late evening, she sells whiskey from a shebeen, as speakeasies are called in parts of Southern Africa.

Her customers, mostly truck drivers who ply the sleepy town of Mutare in the same district, near the border between Mozambique and Zimbabwe, pay little. Also, running a shebeen is illegal in Zimbabwe and most of the whiskey is smuggled into the country via its porous borders.

But Mandiopera has persisted with the trade, mostly for the upkeep of her three boys. “I often get arrested,” she told Al Jazeera. “I even work during late hours to maximise profit. The environment has a high risk of sexual abuse but I have no choice.”

Her monthly salary of 11,000 Zimbabwean dollars, approximately $45 at the prevailing black market rate, is paid on time, but barely lasts two weeks. In Zimbabwe, some teachers joke that they have to take the maxim “a teacher’s reward is in heaven” literally.

But like Mandiopera, many have resorted to finding alternative means to survive here on earth. In the Southern African country, only 150,000 teachers cater to 4.2 million students and the average salary of a teacher is 28,800 Zimbabwean dollars ($120).

For years, teachers have been migrating to neighbouring countries such as South Africa, Namibia and Botswana to find better-paying jobs.

Experts say Zimbabwe is experiencing its worst economic crisis in decades with uncontrolled inflation, stagnant salaries and widespread poverty as a result of mismanagement and corruption under the Emmerson Mnangagwa administration.

The economic woes have worsened because of the ripple effects of COVID-19 and now the Russia-Ukraine war.

Prices of basic commodities like bread, petrol, internet data bundles and electricity tariffs continue to increase – as well as rent – due to supply disruptions, piling more pressure on Zimbabweans.

In some cases, this has been by as much as 150 percent, as the volatile Zimbabwean dollar continues to plummet against the US dollar.

According to the World Bank [PDF], 7.9 million people in Zimbabwe fell into extreme poverty from 2011 to 2021, living under the food poverty line of $29.80 for each person a month.

Over the last three years, Zimbabwean teachers have embarked on repeated industrial action over inadequate salaries and poor working conditions as the economic situation worsens in the country.

On February 7, they again went on a strike for salary increases when schools opened, following a shutdown to restrict the spread of the COVID-19. The government responded by suspending them for three months without pay on February 10, 2022.

Primary and Secondary Education Minister Evelyn Ndlovu also gave a deadline for the striking teachers to return to the classrooms.

Though the official number of teachers who were suspended was not given, teachers’ unions say about 90 percent of the 150,000 public school teachers were affected by the government’s move.

On February 16, the suspension was set aside by a Harare court after lawyers representing the striking teachers argued that the government’s decision was unconstitutional. Noble Chinhanu, one of the lawyers, told Al Jazeera that the ministry’s act was shocking in relation to constitutional rights and freedom to fair labour standards and to administrative conduct.

Chinhanu said it was an illegal move by the government to just summarily suspend every teacher whether or not they had reasonable suspicion to believe any misconduct was ever committed.

Obert Masaraure, president of the Amalgamated Rural Teachers Union of Zimbabwe (ARTUZ), lambasted the government as “reckless” and “trying to paralyse the education sector through mass suspension”.

The day the court made its decision, the government gave a week’s deadline for them to return to work or lose their jobs, in a bid to compel teachers to return to work. The authorities also threatened to replace them with unemployed graduates.

ARTUZ wrote a letter to the government asking it to withdraw the intimidation letter saying it was unconstitutional.

On February 8, the government increased teachers’ salaries by 20 percent and COVID-19 allowance from 16,500 to 38,500 Zimbabwean dollars ($75-$175) among other benefits for them such as housing scheme and duty exemption when importing motor vehicles.

But the teachers are still demanding $540 or the equivalent in the local currency as base salary, saying they cannot afford to pay tuition for their children on the current wages. The government has ruled out paying salaries in US dollars.

The unions rejected the increment. “What we want is a living wage, a restoration of pre-October 2018 salaries which is $540,” Masaraure said.

Takavafira Zhou, president of the Progressive Teachers Union of Zimbabwe, said the government’s threats are compromising the industrial action with some teachers now forced to return to work. He called for the government to pursue dialogue instead.

“The issue of $540 during [former President Robert] Mugabe’s regime is the expectation of all teachers,” he said. “We continue to fight for the betterment of salaries and conditions of teachers, by all means, necessary,” he said.

Across the education sector, the ongoing economic crisis has manifested in infrastructure decline and depletion of staff numbers. Fees in public schools have also been tripled beyond the reach of many because of the continuing inflation. In private schools, things are much more expensive.

Teachers also say many children have also been left out in online learning initiatives introduced by some schools because they do not have the requisite gadgets or cannot buy data bundles.

The situation has also been worsened by the COVID-19 pandemic which has left teachers working without adequate personal protective equipment (PPE) in public schools.

For Mandiopera, these are further evidence of the need to continue piling pressure until their grievances are addressed. “The struggle continues as long as the government is failing to pay us a living wage,” she said.

Newer Post
Mangwana To Replace Kazembe As The New ZEC Spokesperson
Older Post
How exactly do you kick a Zimbabwean NGO out of Zimbabwe?