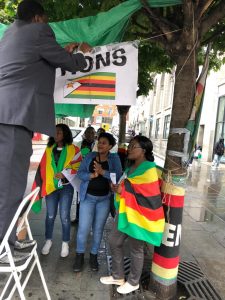 To boldly go where we have gone before: that is the trajectory we appear to be on for the next five years of Zanu PF rule. Bon voyage!

The Vigil is, of course, sorry at the failure of the MDC’s court challenge to the presidential election. We are convinced it had a good case but believe the result was sadly predictable. The Vigil has already expressed our disquiet that the MDC went into the elections without getting the reforms it had been insisting on.

Some respected voices suggest that a corner has been turned since Mugabe was overthrown and that the new regime is somehow more democratically inclined. The Vigil is skeptical. It’s still a Zanu PF government, whether or not the military is in charge.

It will now no doubt explain that the shootings in Harare were really by unknown, probably opposition elements and try to persuade the West that really all is well.

Judging by the statement by Britain’s Africa Minister Harriett Baldwin after the constitutional court hearing, London will go along with that (see: https://www.gov.uk/government/news/statement-on-the-zimbabwean-elections).

Some observations by the Zimbabwean wildlife painter Larry Norton.

In the midst of the confusion there are things I am certain of:

There are a few things I wonder about:

Thanks to those who came early to help set up the table and put up the banners and the tarpaulin in the rain: Deborah Harry, Josephine Jombe, Selina Kudita, Marian Machekanyanga, Rosemary Maponga, Margaret Munenge and Ephraim Tapa. Thanks also to Josephine, Margaret, Deborah and Rosemary for looking after the front table, to Marian for handing out flyers and to Selina and Nyarai Masvosva for taking pictures and Beverley, Sipho and Chido for drumming and leading the singing. It was good to joined by Jean-Francois Mercier, one of the founders of the Vigil who now lives in south Africa.