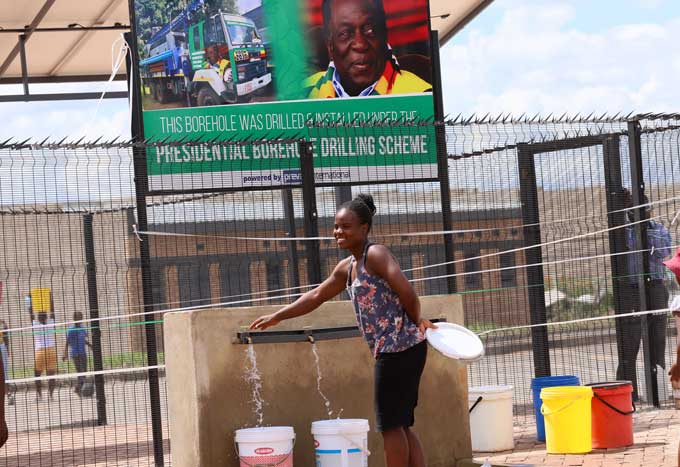 BY IGNATIUS BANDA
Faced with cyclical droughts and low water levels in supply dams, Zimbabwe is turning to boreholes for relief, raising concerns about already precarious groundwater levels across the country.

The vv says it will drill 35,000 boreholes by 2025 countrywide, focusing on parched rural areas where erratic rainfall has affected both people and livestock.

The climate change-induced water crisis has not spared the country’s national parks, forcing sector officials to turn to groundwater for relief.

A 2021 review by the Southern African Development Community’s Groundwater Management Institute said Zimbabwe’s capital city Harare had 28,000 registered boreholes, with 80 percent of the population “dependent on groundwater for potable supply.”

“With such dependency, it becomes imperative that the resource is well monitored for sustainable management, and to enhance well-informed decisions at policy formulation level,” the report said, adding, “groundwater is a finite source.”

The drive to turn to underground water supplies comes despite earlier warnings by the Zimbabwe National Water Authority (Zinwa) that the country needed to be cautious in tapping groundwater.

The post-Mugabe administration has upped the drilling despite what experts say is continued poor rainwater seepage to raise the groundwater table, highlighting the country’s struggles with climate change and its adaptation efforts.

This is happening despite concerns from experts regarding what they have called “limited knowledge on aquifer recharge areas and rates,” further exposing the long-term sustainability of groundwater resources.

“If you over-abstract groundwater, you will obviously deplete it,” said Professor Innocent Nhapi, a consultant and climate-resilient development scholar.

From this knowledge, we need to prepare groundwater management plans for different sub-catchments.”

The country’s major towns, including the second city Bulawayo, continue to face crippling water shortages, with residents questioning the water quality from the municipality boreholes.

It has become customary for residents to experience rolling water cuts by the local municipality.

This has meant long queues at boreholes, with some wondering why the boreholes take so to fill the buckets.

“Water does not pump as quickly as it used to. We take too much time in the queue,” said Nomazulu Nxumalo, a local home keeper.

The situation is even dire in low rainfall rural areas in the country’s southwest, where villagers and civil servants, such as teachers, share one borehole.

“You need plenty of strength to pump water these days,” said Leonard Maphosa, a teacher based in Lupane, about 170km from Bulawayo.

“I think the water is now far, far below. We have a well that has since been filled with sand because it does not have any more water,” Maphosa told IPS.

“Short, intense rainfall whilst providing a lot of water doesn’t provide enough time for the water to infiltrate and percolate into aquifers.

“A greater percentage of the water flows away as quick runoff,” said Tirivanhu Muhwati, a climate scientist and project coordinator at the country’s climate and environment ministry.

“This, however, does not mean that the boreholes should not be sunk as an adaptation measure.

“It simply means that the boreholes have to be fitted with water-use efficiency mechanisms, and demand-side management measures have to be instituted,” Muhwati told IPS.

For years, experts and government officials have noted that a lasting solution to Zimbabwe’s water crisis despite seasonal floods is the construction of dams. Still, as in many other sectors, authorities have cited a lack of resources for constructing them.

Despite population expansion, big cities such as Bulawayo have not built any new dams since the country’s independence in 1980, forcing authorities to sink more boreholes for relief.

“As more surface runoff is expected, the country should intensify the building of dams to capture the surface water,” Muhwati told IPS.

“This should be supported by the associated water conveyance infrastructure to where the water is required for agricultural, commercial, and domestic use.

“Groundwater can then be used only as a last resort,” he said.

Zimbabwe is not the only country in the region turning to groundwater.

The World Bank says due to climate variability, which has altered the availability of surface water, southern African countries are seeking relief by sinking boreholes, but the resource is already compromised by “threats of depletion.”

According to the World Bank, “at least 70% of the people living in southern African countries rely on groundwater as their primary source of water.”

For Zimbabwe, where another estimated 70 percent of the country’s population lives in rural areas, groundwater is the only available resource highlighting the country’s challenges towards meeting Sustainable Development Goal 6 (SDG6), which seeks to ensure the availability of water for all by 2030. — IPS