‘Zimbabwe was better under my dad’s rule’: Robert Mugabe’s son 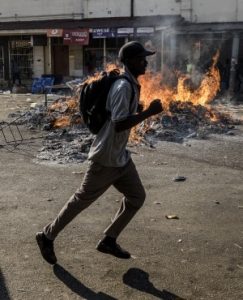 Violent protests broke out in Harare on Wednesday as supporters of MDC Alliance leader Nelson Chamisa vented their anger over a  delay by the electoral commission in announcing results for this week’s presidential poll.

The army was called in and opened fire on protesters. At least six people were killed and at least 14 wounded, according to police.

Two years ago, when his father was still in power, violent anti-government protests broke out in Harare, according to reports at the time.

Reuters reported at the time that protesters clashed with riot police and property was burnt and destroyed but the army was not called in.

Robert Junior is currently based in Johannesburg, where he has opened his own fashion label and is studying, reports Harare’s private Daily News.

On the eve of Monday’s elections, former president Mugabe said he would vote for Chamisa. He repeated his strong criticism of the “coup d’etat” in November that saw his ruling Zanu-PF party replace him with Emmerson Mnangagwa.