Zimbabwean politicians, international dignitaries and thousands of citizens have gathered at a stadium in Harare to pay their final respects to the country’s founding father, Robert Mugabe.

The state funeral in the capital on Saturday followed a week of disputes between the Mugabe family and the government over where the former president will be laid to rest.

Mugabe, who ruled Zimbabwe for 37 years until he was forced to resign in the wake of a military coup in November 2017, died last week in a Singapore hospital at the age of 95.

Ruling ZANU-PF party and President Emmerson Mnangagwa, Mugabe’s former deputy who helped remove him from power, wanted him to be buried at a national monument to heroes of the liberation war against white minority rule. But some relatives, expressing bitterness at the way former comrades had deposed Mugabe, pushed for him to be buried in his ancestral village of Kutama.

The two parties on Friday finally agreed he should lie at National Heroes Acre in Harare. The burial will take place in about 30 days, once a new mausoleum has been built for him there. 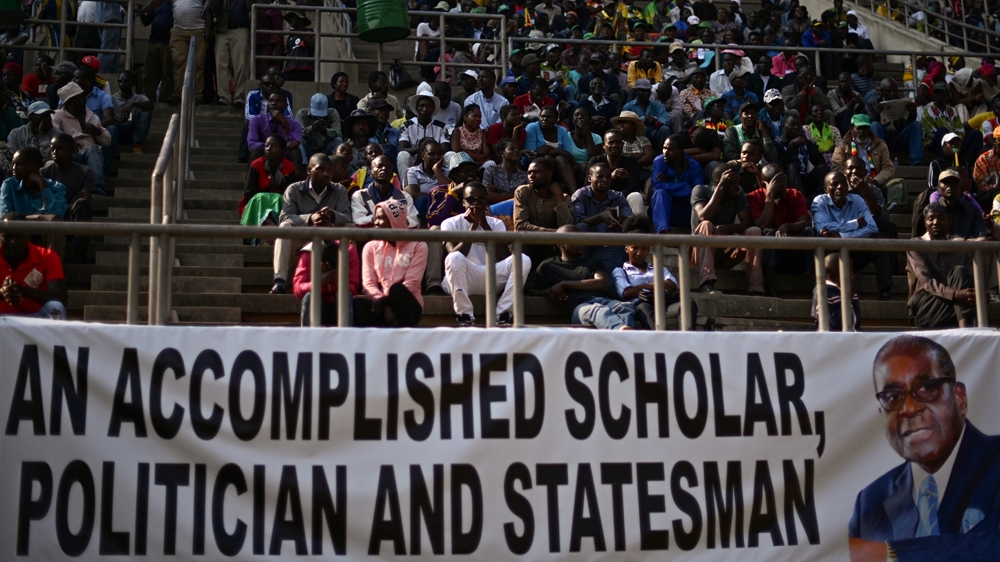 Al Jazeera’s Haru Mutasa, reporting from the stadium in the capital, said the wrangling over Mugabe’s burial exposed the deep divisions in the country over his legacy.

“People who love Mugabe are saying that is a great idea, that it is a great way to honour him,” she said, referring to the burial at National Heroes Acre.

“Some Zimbabweans are saying officials knew that Mugabe was going to die at some point, so why didn’t they build the mausoleum earlier?” she added.

“Many others are asking who is going to pay for this? Is it going to be the Mugabe family or is it going to be taxpayers’ money? If it is taxpayers, how much is it going to cost? It could cost millions of Zimbabwean dollars, money that could be better spent elsewhere like in public hospitals where there is a lack of essential drugs.”

Mugabe was feted as a champion of racial reconciliation when he came to power in 1980 in one of the last African states to throw off white colonial rule.

By the time he was forced to step down in 2017 to wild celebrations across the country of 13 million, he was viewed by many at home and abroad as a power-obsessed leader who unleashed death squads, rigged elections and ruined the economy to keep control.

Mugabe’s coffin, draped in the green, black, gold and red Zimbabwean flag, was marched slowly into the stadium, which was only half-full, accompanied by a military band and an escort of officers. His wife, Grace, in a black veil, and family followed behind.

In his tribute to Mugabe, Mnangagwa said his predecessor stood in defence of Africans. He also urged the West to remove sanctions that were imposed during Mugabe’s rule.

“We who remain shall continue to hear his rich, brave, defiant and inspiring voice … encouraging and warning us to be vigilant and astute,” Mnangagwa said in a speech.

“A giant tree of Africa has fallen. Today Africa weeps.” 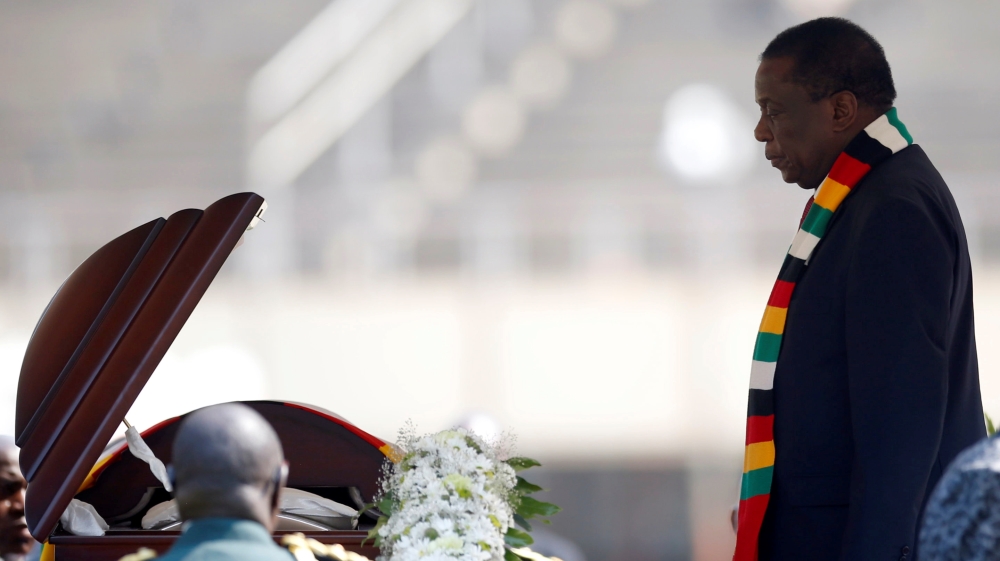 Kenyatta meanwhile described Mugabe as “a great icon of African liberation” and “a visionary leader and relentless champion of African dignity”.

Ramaphosa, for his part, drew boos from the crowd, angered by recent attacks on foreigners in South Africa, in which Zimbabweans were targeted. An official had to plead with the crowd to let him speak. Ramaphosa apologised for the attacks.

Banners reading “Hamba kahle, Gushungo,” (go well, Gushungo) in reference to Mugabe’s clan name and “Pioneer of nationalist politics,” were on display at the stadium before the state funeral.

“I feel low because Mugabe fought for us. I remember him for [giving] land to the blacks, economic freedom and higher education which was non-racial,” Cleo Mapuranga, a caterer, told Reuters news agency.

“Now, people are suffering. No one is controlling the prices in the shops. Our finance minister is trying to implement first-world policies which don’t work in third-world countries.” Mapuranga added.

Mnangagwa’s government has taken steps to cut the budget deficit, remove subsidies on fuel and power and repeal laws curbing public and media freedoms, but the austerity measures have compounded ordinary people’s hardships.