I have had a two-year-old question that has never been answered and still sits glaringly on my mind. What did all those tens of thousands of people who thronged the streets of Harare in November 2017 think they were doing? I have never received a satisfactory answer to this question. 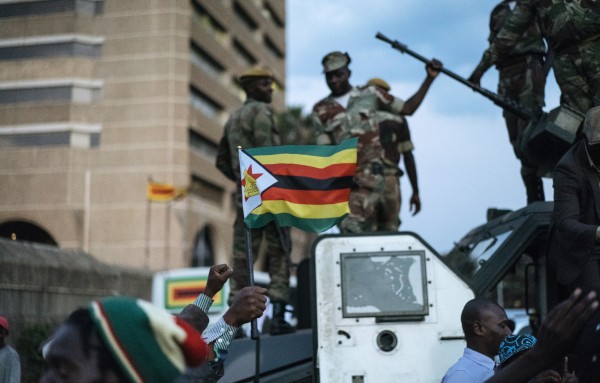 A man holds up the national flag of Zimbabwe as Zimbabwean soldiers are celebrated by citizens in the streets in Harare after the resignation of Zimbabwe’s president Robert Mugabe. Photo: AFP / Marco Longari

I remember watching on TV, in disgust, as all those people shouted for Mugabe to resign, having selfies taken with the military, and to cap all this insanity – the opposition MDC sharing a stage at a rally in Highfields (I think it was Highfields) with some ZANU PF war vets, repeating the same call.

My question then was, my question today still is – what did all these people seek to achieve? Did they not understand the dynamics of Zimbabwean politics? Did they not know that this was just the height of ZANU PF internal fighting, and that they were merely pawns for one faction to usurp the other? Was it not clear that there was absolutely nothing for the ordinary person to gain from this? Did they not understand the nature of the factional fighting within ZANU PF – that the removal of Mugabe was solely to prevent him from appointing his wife Grace as vice president at the December 2017 congress (to replace the then recently dismissed Mnangagwa), thereby paving the way for her to succeed her husband? A few days prior the coup, even the military generals, led by then commander Gen Chiwenga – who later led the takeover – had publicly warned against Mugabe making such a move.

Did those people who joined these marches for Mugabe to resign not appreciate these basic facts? What really did they expect to change with the ouster of Mugabe?

Removing just one part of an entirely rotten fish does not make it fresh again.

That’s why even today, though their long-time dictators have been ousted, the people of Algeria and Sudan have never ceased calling for the entire system to go! Yet, we in Zimbabwe were content with the removal of just one man.

Honestly, do we not have only ourselves to blame for the situation we find ourselves in today? Should we not have taken advantage of the mayhem of November 2017, not to support ZANU PF infighting, but to flood the streets and demand for the whole caboodle to go?

That is the crisis of Zimbabwean politics. We, the ordinary masses, become so engrossed in our suffering that we lose focus of what type of change is truly good for us. We allow our suffering to blind us, and distort our sense of discernment, such that we become so easily waylaid by those who have their own selfish agendas.

Desperation has never been a positive quality. In fact, it’s not only dangerous, but leads to self-destruction.

As much as we are enduring untold immense suffering, we should, nonetheless, never lose the dignity of a sound mind. We should be willing to bind our time – whilst, carefully calculating and measuring our every move and decision – to ensure that whatever action we finally take, truly achieves its stated goals.

What is the point of hastily making ill-thought out decisions, only to cry tomorrow? Is this not what we are doing today after having supported the November 2017 coup?