Zimbabweans woke up early to join long queues to cast their vote in an election they view as the most critical after the 1980 one.

Zimbabweans woke up early to join long queues to cast their vote in an election they view as the most critical after the 1980 one. This is the first election since the removal of Robert Mugabe viewed by many for being the author of the economic problems in the country.

11:07 – In Chikomba West Northwood Primary School 300 people has already voted. Two were turned away as one had a photocopied National ID and the other was not in the voters roll. In the rural chikomba, only Zanu PF has agents while the MDC Alliance has failed to have agents. So far no foriegn observors in the rural areas but Zesn members.

#AMHConversations brings you elections as they happen with candidates, political and economic analysts, renowned journalists with incisive, robust analysis and debates.

10:50 – Voter turnout in Mazoe South constituency has been low with other polling station virtually deserted. As at 10 am at Henderson Research station, 195 voters had cast their ballots with females constituting the largest part of voters. About three voters were turned away. Two voters did not appear on the voter’s roll while the other is an alien.

Mururi Munetsi, chief polling officer said voting had been going on smoothly. European Union and NANGO observers were present. At Harmony farm tent ward 16, Mazoe South, 92 voters had cast their ballots by 10 am. Australian obsever mission said voting was largely peaceful ,although they were concerned about the pace at which voting was being conducted.

10:40 – In Muzarabani South, ward 15 short queues at Gatu Primary School were 668 people are said to have registered to vote. At Muzarabani South Constituency Command Center and there are no statistics yet as the Constituency Election Officer Blazio Chigwa claims that network problems has caused the delay to receive the results from other polling stations. No violence claims yet, with huge queues witnessed at some polling stations outskirts of Centenary such as Goromokwa, Clear Morning and Mwonga. The Election Officer claims that they have received enough material for the election. There are not foreigner observers yet but Zesn officials present. No campaigning or posters within the confined zone. Contesting candidates are Tapera Saizi of ZanuPF, Tapiwa Talent Choruwa of MDC ALLIANCE and Mika Gundani of National Assembly

Villagers are travelling distances of up to 20 kilometres to vote. They are using their donkey drawn carts for transport. Atmosphere is peaceful and it is mostly women voters in queues.

#AMHconversations brings you elections as they happen with candidates, political and economic analysts, renowned journalists with incisive, robust analysis and debates.

Meanwhile, #Zimdecides2018 and #ElectionsZw are trending on Twitter as Zimbabweans discuss the voting process that is currently underway? 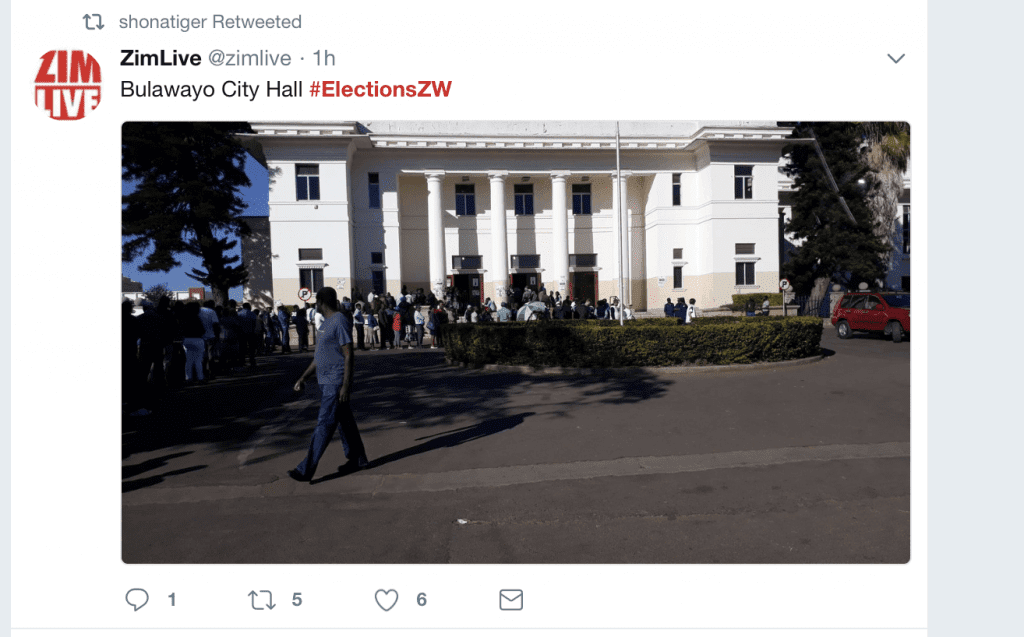 While other international broadcasters have allocated a lot of airtime to the Zimbabwe election, giving minute by minute updates from events countrywide, the state broadcaster, ZBC TV is screening regulaar programme. ZBC TV only broke off the normal programming to air Mnangagwa casting his vote.

Dingumuzi primary (Plumtree urban) had the largest number of voters at the opening of polling station with 33 females and 35males.

In terms of the largest number of voters between males and females, it has been a seesaw affair. In some stations there are more males than females and vice versa.

No reports of violence or any other electoral malpractices reported as yet.

09:55 – In Chikomba West at Riversdale primary school by 09:50 196 people had cast their vote and three assisted voters. No foreign observors only Zesn. The MDC Alliance does not have agents allthough a list of the same was provided to the presiding officer.

09:47 – Business is low at the usually busy Sakubva market in Mutare central constituency as most vendors have expressed their desire to register their vote.
The few vendors at the market were optimistic to vote later in the day.

One vendor who identified himself as Jennifer Kondo said they are hoping for change. “We are going to vote in the afternoon. l just want to make some few sales but obvious l can’t continue vending like this,” she said.

Zanu PF is represented by Nancy Saungweme in the contituency while MDC-Alliance is being represented by Innocent Gonese who has been occupying the seat since 2000. The seat is a known MDC-T stronghold.

11 candidates are vying for the seat. Former senator Patrick Chitaka also stands a chance of winning the election. In Mutasa Central MP Trevor Saruwaka claimed that there was intimidation to some of his polling agents by ZANU PF supporters.

“Some of my polling agents are claiming intimidation by ZANU PF. This started last week as some of them were randomly arrested for no apparent reason. l have  polling agents who are known here in Mutasa Central so they are being targeted,” he said.

The dreadlocked Saruwaka has already defeated Zanu PF stalwarts in the seat such as the party’s current chairperson Oppah Muchinguri and businessman Benza.

Currently he is in the hat with seven candidates including Zimbabwe National Water Authority ZINWA boss Jefter Sakupwanya who is contesting under the Zanu PF ticket.

09:35 – Chamisa on ZEC complaining about yesterday’s presser which they view is breaking the law: “ZEC is doing this bidding on behalf of  Mnangagwa who is pannicking, who is scared of victory of the MDC Alliance. It’s very clear from my reading that Mr Mnangagwa has been issuing statements, last night he issued a statement and I’m surprised why they have not reported Mr Mnangagwa. So I’m not going to waste my time on ZEC. My part is to play a positive role in making sure that there is peace in this country, Zimbabweans need peace and I know that we are winning this election, I’m only here to confirm that we are ready to read.

On Mugabe he said I can’t discriminate on voters if Mugabe decided to vote for me I am sure he will be doing that in his own right.

09:12 – The presiding officer at Forester F Primary claims the serious delays leading to the growing numbers are a result of illiteracy as they are taking much time in assisting the voters.

09:11 – Voting ongoing at Mazowe citrus with long queues if mostly farm workers being witnessed. Zec chairperson Justice Chigumba voted early when at Bunnickburn in ward 20 Mazowe South. She called for peaceful elections and urged people to go out and vote.

09:06 –  Forester F Primary School enroute to Centenary long queues at the School with elderly complaining of the delays, youthful voters in their numbers. Forester F Primary is also the Command and Collation center for Mazowe North ward 27 were 842 people are said to have registered.

09: 04 – In Dangamvura/Chikanga constituency where there is a record 59 000 registered voters there was a massive turn out as early as 7 am with voters lining up to cast their vote.

08:48 – No foreign observers yet here at Umvukwesi Primary School but ZESN and Human Rights commission officials are present.

08:46 – A male voter has failed to vote at Umvukwesi Primary as he is said to be on the exclusion list of code DR meaning he had registered twice so he was told to go and vote at the correct polling station.

08:45 – At Current Shopping Centre in Budiriro voting is progressing smoothly. People started queuing as early as 6am and many have expressed satisfaction with the pace of the queue following the arrival of a Sadc observer mission.

08:36 – Voting in some place in Chegutu has been stopped. Wrong voting material delivered.

Newer Post
Victory is certain, says Nelson Chamisa as he casts vote
Older Post
Zimbabwe elections: What you should know