Zimbabwe elections: What you should know 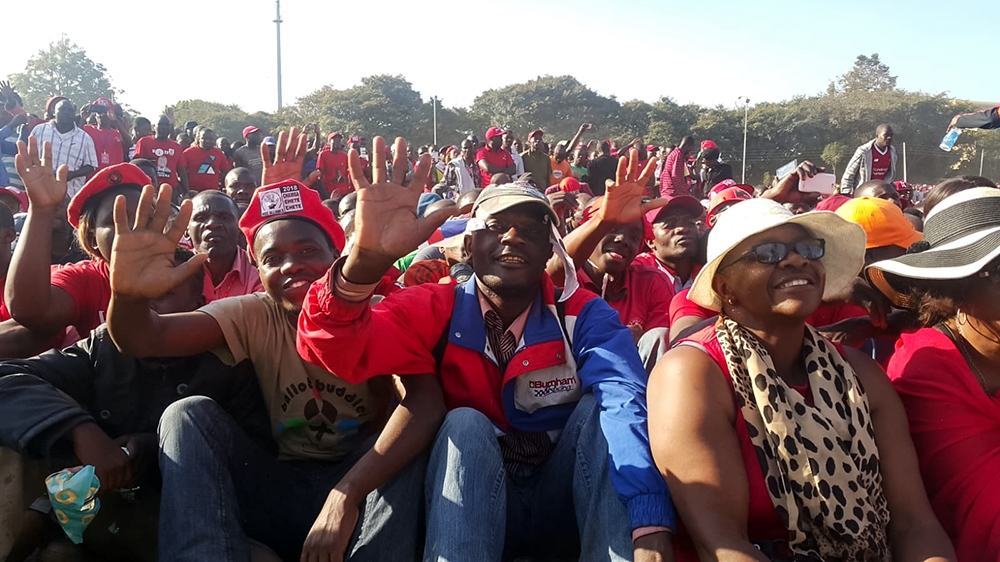 Zimbabweans head to the polls on Monday in first vote in decades without ex-president Mugabe’s name on the ballot.

Source: Zimbabwe elections: What you should know | News | Al Jazeera

Zimbabweans head to the polls on Monday in first vote in decades without ex-president Mugabe’s name on the ballot.

Harare, Zimbabwe – Millions of Zimbabweans will head to the polls on Monday in the first election since 1980 without former president Robert Mugabeon the ballot.

There are 23 candidates vying for the presidency, while 55 parties are running in parliamentary elections.

Campaigning has been relatively peaceful but security concerns were raised after an explosion struck an election rally by the ruling ZANU-PF party in the second city of Bulawayo, killing at least two people and wounding dozens.

Unlike previous votes, election observers from the European Union and the Commonwealth group have been allowed into Zimbabwe this time.

Here is what you need to know about the hotly contested polls:

Mugabe not on ballot

Monday’s landmark poll marks the first time since white minority rule ended in Zimbabwe in 1980 that people will not have the option to vote for their former long-time ruler.

Last November, 94-year-old Mugabe was pushed out of office by the country’s military, which was unhappy with the dismissal of then-vice president Emmerson Mnangagwa and moves to have the veteran leader’s wife, Grace Mugabe, succeed him.

Mnangagwa, whose nickname is “the crocodile”, replaced Mugabe and is now ZANU-PF’s presidential candidate in the election.

Here's everything you need to know about Zimbabwe's upcoming historic election. pic.twitter.com/IOuW3ESNR6

Twenty-three candidates, 19 men and four women, are running for the country’s top seat – all first-time contenders.

Of them, Mnangagwa – current president and ZANU-PF leader – and Nelson Chamisa – head of the Movement for Democratic Change Alliance – are widely seen as the top challengers.

On Saturday, the two leaders held rival rallies in Zimbabwe’s capital, Harare, in one last push to attract voters.

The latest polls show a close race between 75-year-old Mnangagwa and 40-year-old Chamisa, making a runoff on September 8 likely.

A presidential candidate must receive more than 50 percent of the vote in the first round to secure an outright victory.

Voters will also pick 350 MPs in a parliamentary election contested by 55 political parties. Nearly 11,000 polling stations will be in place across the country.

The issues of the economy and job creation have topped political debate in the lead-up to the vote, with all presidential hopefuls promising to fix the country’s financial situation, which has been in meltdown for the past two decades.

Both Mnangagwa and Chamisa have pledged to create jobs by targeting direct foreign investment in the country.

In 2009, amid raging inflation, the landlocked southern African country abandoned its currency, allowing the use of multiple foreign currencies for doing business.

Experts warn, however, it will take time to tackle the country’s economic woes.

“Fixing the economy will not be an overnight job,” Vince Musewe, a Harare-based economist, told Al Jazeera.

“Whoever comes into office needs to know there is no instant fix,” he added, citing “debt overhang” as one of Zimbabwe’s biggest problems.

“The country has a huge external debt, up to about $14bn is owed, and because of that it is unable to access credit lines,” said Musewe.

Economists say the next government will have to make arrangements to either have the debt rescheduled or cancelled.

For the first time since 2002, international election observers have been invited to monitor this year’s poll.

The MDC Alliance has accused the country’s electoral commission of favouring the ZANU-PF in its design of the two-column ballot. Mnangagwa appears at the top of the second column while Chamisa appears second on the first column.

It said if the ballot paper was designed as a single column, a voter would not be able to place it into the ballot box as it would be too thick for the slot when folded.

There have also been reports of voter intimidation and coercion, as well as state media bias towards ZANU-PF.

Barring any violence or signs of vote rigging on election day, observers are expected to criticise different aspects of the process without fully discrediting the vote.

People under 35 make up more than 75 percent of Zimbabwe’s population.

While youth voter apathy has been a major issue in the past, there is now a new palpable excitementthat may drive more young people to the polls.

At least 60 percent of the 5.6 million registered voters are under the age of 40, and experts expect this to play a key role in the closely contested election.

“The youth vote is important because it means there are many more new voters and this a new generation of voters that have registered,” Takura Zhangazha, a political analyst, told Al Jazeera.

“This means that whoever wants to win the Zimbabwean election evidently has to woo the youth voters,” Zhangazha added.