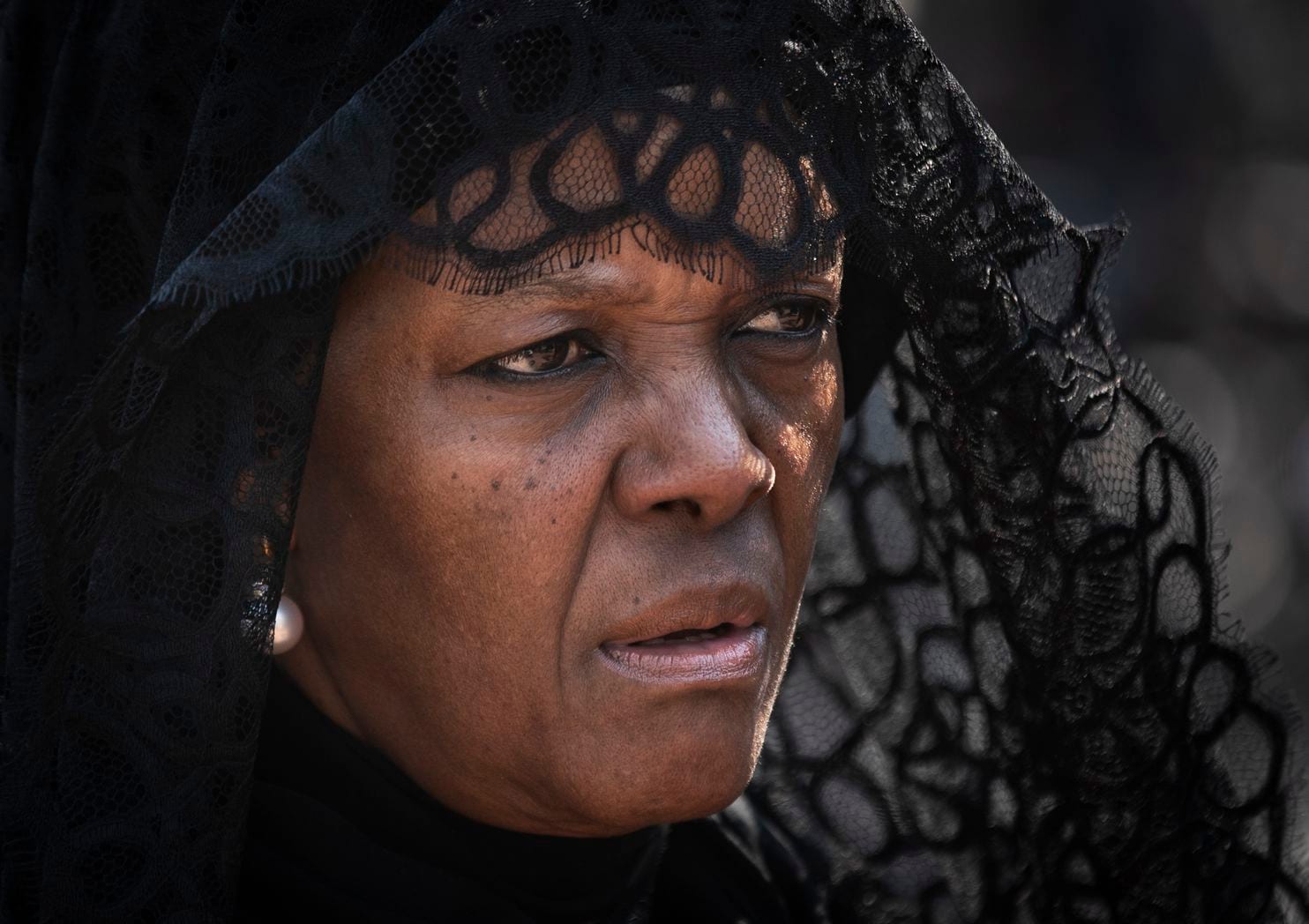 Widow Grace Mugabe wears a black veil as she follows the casket of former president Robert Mugabe to an air force helicopter for transport to a stadium where it will lie in state, at his official residence in the capital Harare, Zimbabwe Thursday, Sept. 12, 2019. Controversy over where and when Robert Mugabe will be buried has overshadowed arrangements for Zimbabweans to pay their respects to the deceased leader. (Ben Curtis/Associated Press)

HARARE, Zimbabwe — The controversy swirling around the burial of Zimbabwe’s founding leader, Robert Mugabe, centers on his widow, Grace, who has remained dramatically cloaked behind a heavy black veil as she succeeded in getting the country’s president to scrap his plans for the ex-leader to be buried in a simple plot alongside other national heroes and instead build a grand new mausoleum for her husband.

Known as a strong-willed woman with political ambitions, Grace Mugabe has made the most of her role as the grieving widow — and some in Zimbabwe think she is using the issue to reassert herself as a force to be reckoned with in the country.

When the 54-year-old Grace objected to the funeral plans for Mugabe, who died last week at 95, President Emmerson Mnangagwa came to her palatial 25-bedroom residence in Harare’s posh Borrowdale suburb to consult her about how the interment should proceed. He departed saying he would respect her wishes and scrapped his funeral plans.

She and other family members said they had enlisted the support of Zimbabwe’s traditional chiefs to determine how Mugabe would be buried. In a series of announcements throughout the week they divulged details of where, when and how Mugabe would be buried. The saga culminated Friday with the announcement that the funeral had been postponed for 30 days, until the elaborate new edifice could be built at the Heroes’ Acre national monument.

“We are building a mausoleum for our founding father at the top of the hill at Heroes Acre,” Mnangagwa said on state television of the plan to construct the imposing monument to Mugabe, a guerrilla leader who fought to end white-minority rule when the country was known as Rhodesia. “It won’t be finished, so we will only bury him after we have completed construction.”

The wrangle over the burial highlighted the lasting acrimony between Mugabe’s widow and Mnangagwa, who helped oust Mugabe in 2017 after 37 years of often tumultuous rule as the country went from prosperity to economic decline, hyperinflation and widespread shortages.

It was also the latest achievement for Grace Mugabe, who rose from being one of the president’s secretaries to become first lady. Mugabe and his first wife, Sally, had one son who died while Mugabe was jailed by the Rhodesian regime. When Sally was ailing with kidney failure, Mugabe struck up a relationship with Grace, 41 years his junior, and they had a daughter and two sons. Following Sally’s death in 1992, Mugabe married Grace in 1996 in a lavish ceremony at his birthplace, Zvimba.

As Zimbabwe’s first lady, Grace became known for shopping sprees in Europe and Asia, building huge residences, and staking claim to farms in the choice Mazowe area, outside Harare, as part of Mugabe’s seizure of once white-owned properties. Grace also featured in a series of scandals and lawsuits, including one in which she sued a diamond dealer she said didn’t deliver a 100-carat diamond she claimed to have paid for. In South Africa she was charged with assaulting a young woman who had been in her sons’ hotel suite in Johannesburg.

She also became increasingly prominent politically, becoming the head of the Women’s League of her husband’s ruling ZANU-PF party. She launched a series of public attacks on then-Vice President Joice Mujuru that led to Mujuru being sacked in 2014. She then turned her sights on Mnangagwa, who was fired from the vice presidency in 2017 and appeared poised to take that position herself. Mnangagwa fled the country, saying he feared for his life.

The prospect of Grace Mugabe gaining so much power, especially as Mugabe was becoming visibly feeble, prompted the military to put the couple under house arrest. Mugabe was forced to resign in November 2017, and his wife was expelled from the ruling party.

With Mugabe’s death and the protracted drama surrounding his burial, Grace has reasserted her national prominence — and her ascendency over Mnangagwa.

“That stuff about traditional leaders making the decision is rubbish. Grace was determined to decide how Mugabe should be buried,” said Zimbabwean analyst Ibbo Mandaza. Since Mugabe’s ouster “Mnangagwa has not taken any action against her. Nothing has happened to the mansions, the properties, the state allowances.”

“The whole narrative of the ruling class is the same. There is hypocrisy and looting. There is no honor or dignity,” he said.

And Grace might just make a political comeback, he added. “Maybe in a year we will see Grace in bed with Mnangagwa, politically, if not literally,” he said.