Zimbabwe’s Mugabe says never thought Mnangagwa would turn against him 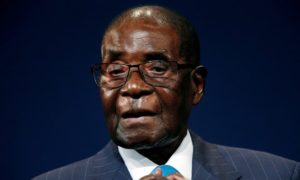 HARARE (Reuters) – Zimbabwe’s former leader Robert Mugabe said he never thought new President Emmerson Mnangagwa would turn against him and denounced Mnangagwa’s move to oust him last year as a coup, in an interview broadcast on Thursday.

Mugabe, 94, ruled Zimbabwe from independence in 1980 until he stepped down under pressure from Mnangagwa’s allies in the army in November.

Viewed by some as a liberation hero, others remember Mugabe for turning a promising country into an economic basket case and international pariah.

Mnangagwa, deputy president under Mugabe, has promised to open up Zimbabwe to foreign investment and mend ties with the West since assuming power.

“I never thought he whom I had nurtured and brought into government and whose life I worked so hard in prison to save as he was threatened with hanging, that one day he would be the man who would turn against me,” Mugabe said in the interview with South African state broadcaster SABC from Harare.

Mnangagwa was convicted of sabotage under white minority rule and sentenced to death. But he was spared the noose because it was deemed that he was a minor when he had committed the crime.

Mugabe said he was ousted in a “military takeover” and that Mnangagwa had assumed the presidency illegally.

“I don’t hate Emmerson, I brought him into government. But he must be proper, he is improper where he is. Illegal,” Mugabe said. “We must undo this disgrace, which we have imposed on ourselves. We don’t deserve it.”

Since his fall from power, Mugabe has stayed at his Harare mansion with his wife Grace. His ousting was the culmination of a power struggle between Mnangagwa and Grace Mugabe, who was being groomed by her husband as his potential successor.

Mugabe was granted immunity from prosecution and assured that his safety will be protected in his home country under a deal that led to his resignation.

Mugabe quit as parliament began a process to impeach him, triggering wild celebrations in the streets.

Zimbabwe was once one of Africa’s most promising economies but suffered decades of decline as Mugabe pursued policies that included the violent seizure of white-owned commercial farms and money-printing that led to hyperinflation.

Mnangagwa has said Zimbabwe still wants to end discrimination between black and white farmers but will seek new ways to compensate those who have lost their properties. Former colonial ruler Britain said last month that Harare should press on with transparent and fair land reform.