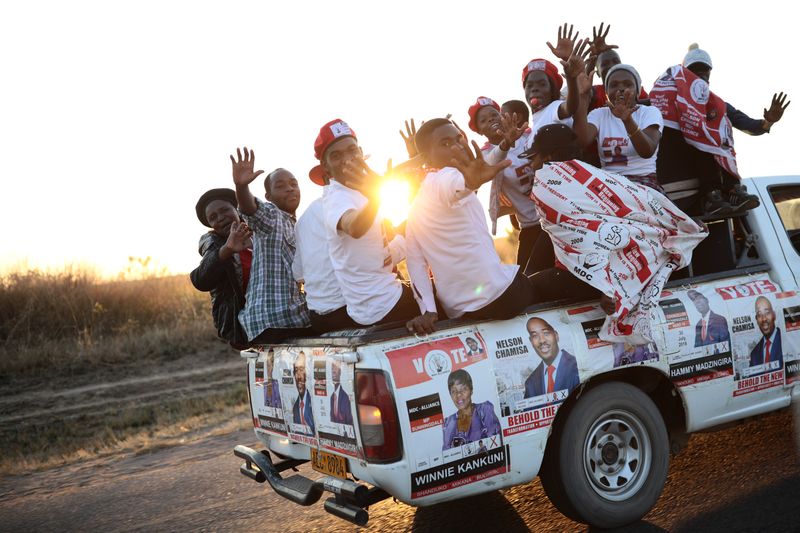 The winner of Zimbabwe’s July 30 elections could find their victory to be a hollow one.

The next ruler will have to administer an economy in meltdown after two decades of misrule and corruption under former leader Robert Mugabe and a broke Treasury that’s unable to service its loans or take out new ones. That will leave little scope to improve government services, rebuild crumbling transport links and meet a plethora of other election pledges.

Both President Emmerson Mnangagwa’s ruling Zimbabwe African National Union-Patriotic Front and the main opposition alliance, led by Nelson Chamisa’s Movement for Democratic Change, are targeting increased foreign investment as they seek to grow the economy and create jobs. They haven’t spelled out how they plan to fund incentives to build mines and factories, or provide the infrastructure those businesses will need.

The difficulty of operating in Zimbabwe is starkly evident in Harare, a sprawling, run-down city of about 4 million people. Some areas haven’t had running water for years, raw sewage leaks from burst pipes that go unfixed for weeks at a time and long stretches of tarmac roads have been reduced to rutted tracks. The city council estimates it needs $10 billion to repair infrastructure and attend to its maintenance backlog.

Most other towns and rural areas in the southern African nation have fallen into even worse disrepair and government services are sparse or non-existent.

Zimbabwe’s slide dates back to 1997, when its troops became embroiled in a war in the Democratic Republic of Congo that depleted the national coffers. Its predicament worsened in 2000, when the seizure of white-owned farms by government-backed militants slashed agricultural output and tax revenue. The government then forced the central bank to print money to pay its workers, sparking hyperinflation that eventually forced it to abandon the Zimbabwean dollar in 2009 and begin using mainly the U.S. dollar.

While the switch helped stabilize the financial system until late 2015, an appreciating American currency left Zimbabwean manufacturers unable to compete with their regional rivals, resulting in surging imports and a slump in exports. Dollar bills began to dry up, banks limited withdrawals and the state and companies were left struggling to pay their workers on time.

The government introduced bond notes, a dollar-backed quasi-currency, to ease the liquidity crisis, but the effect has been marginal. Today more than 98 percent of transactions are conducted via bank and other transfers and dollar bills are worth as much as 80 percent more that their electronic equivalent. The cash premium, which is fueling inflation, has mainly been driven by manufacturers who need to maintain stock levels and continue importing to maintain production.

“The biggest challenge will be the currency issue — whether to introduce a local currency or continue with the multi-currency arrangement and what to do with bond notes,” Welcome Mavingire, managing partner at Intellego Investment Consultants, said by phone from Harare. “They’re a symptom of the bigger problem of lack of confidence and the shortages of foreign currency. Whoever wins, once they address those issues, I think everything else will begin to fall into place.”

Zimbabwe’s problems go far deeper than a problematic currency regime. The government has about 350,000 employees whose wages gobble up almost the entire national budget and it owns about 100 companies, most of which are cash-strapped and dysfunctional. The country is also saddled with $1.7 billion of arrears owed to the African Development Bank and World Bank that it needs to clear before it can tap new loans from multilateral lenders.

While the shuttering of metal refineries and manufacturing plants have brought an end to daily power outages, supply is still constrained and the country remains dependent on imports from neighboring Mozambique and South Africa to supplement output from its Kariba hydropower plant and ailing Hwange thermal plant.

The ruling party is targeting an annual economic growth rate of at least 6 percent over the next five years, attracting $5 billion in foreign direct investment and $10 billion in domestic investment a year. The MDC-led alliance says if it’s elected it will build a $100 billion economy (gross domestic product was $17.5 billion last year, according to the International Monetary Fund), sell or close some state companies and introduce a flat corporate tax rate.

Both parties have pledged to revive mining, agriculture and manufacturing, ensure there is macro-economic stability and fiscal discipline, bring debt under control and modernize the government. The presidential vote will coincide with the election of new lawmakers and local government representatives. Campaigning will end on Saturday.

A relatively free, fair and credible election that reflects the will of the people is a necessary condition for Zimbabwe to move forward, Gary van Staden, an analyst at NKC African Economics in South Africa, said in an emailed note.

“Thereafter the real problems need to be addressed,” he said. “The economy is a mess, the regulatory environment is a nightmare and there is no foreign currency to assist investment when it knocks on the door.”

— With assistance by Simbarashe Gumbo

(Updates with end of campaign in fifth paragraph below Government Wages subheadline.)