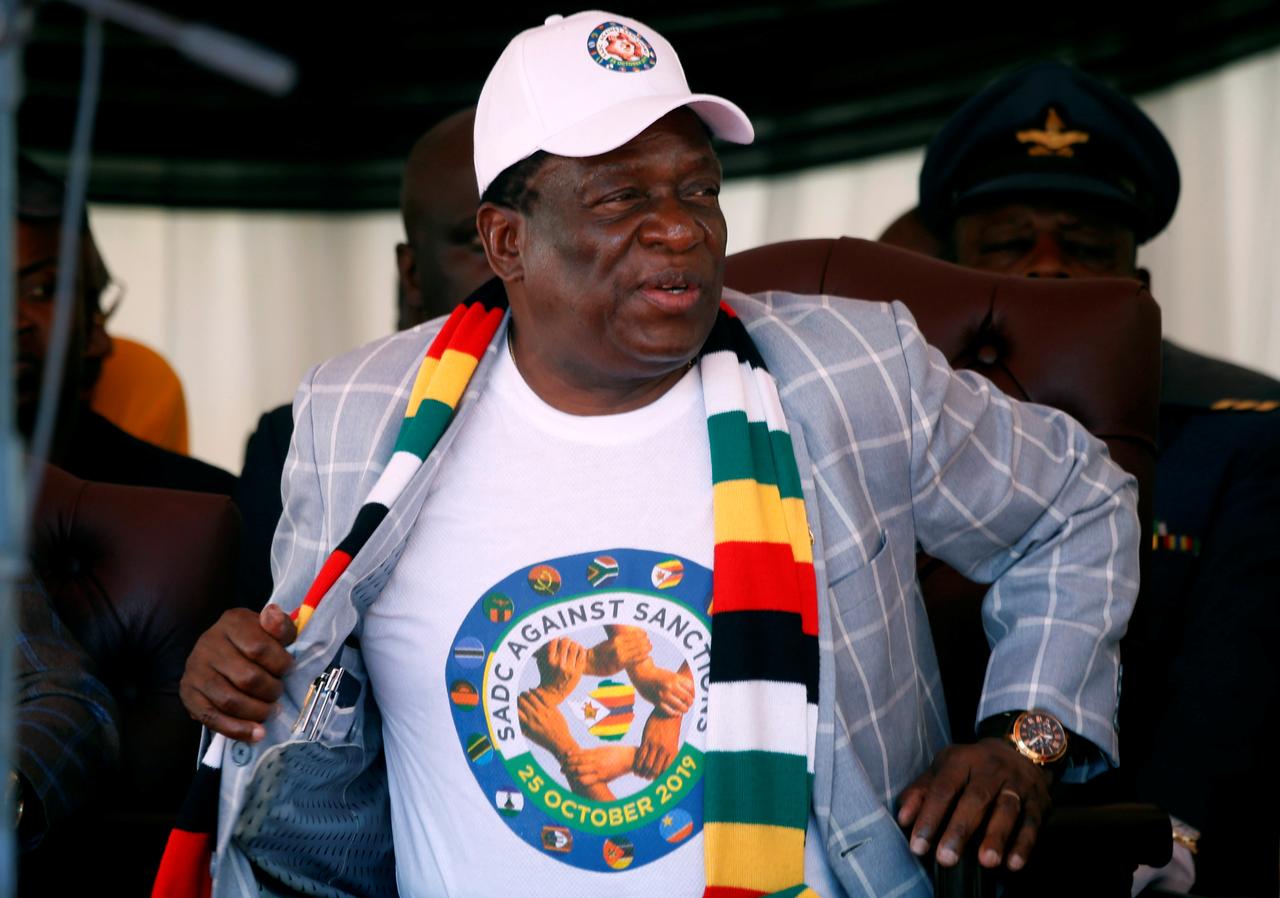 HARARE (Reuters) – Zimbabwe’s President Emmerson Mnangagwa on Friday described Western sanctions as a “cancer” sapping the economy, and his supporters denounced the measures during marches held around the country.

In Harare, many stayed away from the demonstrations, saying they were a distraction from the president’s mishandling of the economy, which is plagued by 18-hour daily power cuts and shortages of foreign exchange, fuel and medicines.

Mnangagwa has so far failed to unify the country since taking over from the late Robert Mugabe, who was ousted in a coup in 2017. Hopes of a swift recovery have faded as the economy struggles to exit its deepest crisis in a decade.

Mnangagwa, like Mugabe, blames the sanctions imposed by the United States and European Union since 2001 for the economic ills and says they are intended to remove his party from power.

“Every part and sector of our economy has been affected by these sanctions like a cancer,” Mnangagwa told a sparse crowd in Harare’s 60,000-seater national stadium. “Enough is enough, remove them. Remove these sanctions now!”

The poor attendance showed the difficulties that Mnangagwa faces in mobilizing party members still divided between Mugabe’s supporters and those who ousted him. The rift was exposed by a bruising dispute over the former leader’s funeral.

Earlier, government supporters led by Mnangagwa’s wife Auxillia and bussed from across Zimbabwe marched for 5 km to the stadium.

Singing and dancing, they waved placards inscribed “No sanctions, no discrimination, sanctions new version of slavery,” and “Enough is enough, remove sanctions now.”

“We have no jobs because of the sanctions. America wants to remove ZANU-PF from power through sanctions but we will defend the party and our president,” said 32-year-old Martin Mafusire.

Similar marches were held throughout Zimbabwe after Mnangagwa declared Friday a public holiday.

But in downtown Harare, many people went about their daily business selling everything from fruit to cellphones.

“It is Mnangagwa who has to go because he has failed. I can’t leave my station to go on a useless march,” said mother-of-three Catherine Chihota, selling fruit at a street corner.

The EU and United States imposed financial and travel bans on ZANU-PF and top military figures for alleged human rights abuses and electoral fraud. The government says the measures are punishment for its seizures of white-owned farms.

ZANU-PF supporters condemn the sanctions while the main opposition Movement for Democratic Change says they are not the cause of the country’s economic crisis.

The regional Southern African Development Community has rallied behind Zimbabwe’s call for an end to sanctions.

While the government ran documentaries and articles in the official press criticizing sanctions, the U.S. and EU embassies took to social media to rebut the official narrative.

U.S. Ambassador Brian Nichols wrote an article in a private newspaper on Thursday saying “the greatest sanctions on Zimbabwe are the limitations that the country places on itself”.

He said the United States remained the biggest donor to Zimbabwe but corruption and lack of reform had dragged down the economy.

The EU keeps some sanctions in place, but in June it began talks with Harare meant to move on from the Mugabe era.

Harare says the U.S. sanctions have been the most devastating. These bar U.S. officials at the International Monetary Fund and World Bank from voting for debt relief or fresh lending for Zimbabwe.

In March, President Donald Trump extended by one year sanctions against 141 entities and individuals in Zimbabwe, including Mnangagwa.