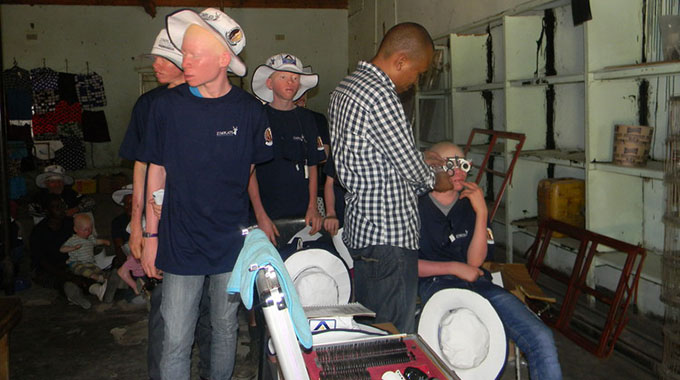 Dr Zolisa Jompolo examines the eyes of one of the people living with albimism in Binga under the Zimplats campaign recently. — Pictures by Micah Zinduru

Micah Zinduru recently in BINGA Features Correspondent
Located in the north-west of Zimbabwe along the Zambezi escarpment, Binga could pass as one swathe of land to have been condemned by geography.

Both flora and fauna are subjected to day after day of cloudless skies, scorching heat and unrelenting sun.

In some years it never rains a drop for months on end. The sun is always angry. The people, vegetation and wild animals alike are used to this harsh reality but they soldier on.

The harsh conditions and unrelenting weather patterns in Binga, home to the BaTonga people, become even hasher and cruel for people living with albinism.

With a population that is largely traditional, it is rather a curse to live with albinism in Binga as such people have to bear with both societal rejection on one side and unforgiving climatic conditions on the other.

“It’s a double curse to live with albinism in Binga. In our Tonga culture, if you are born with albinism, they say it’s a curse and no one wants to associate with you,” said Ms Chipo Siakabwa.

“With a sensitive skin, the hot weather patterns in Binga become even hell to live under.”

Siakabwa, was born with albinism and due to lack of resources to protect her skin and eyes, she is now partially blind.

A mother of five with different fathers, Ms Siakabwa said it was hard to live with albinism in Binga as their culture believes such people were cursed.

She said most of the people who impregnated her were doing so not out of love but because of some beliefs.

“Some of the people who approach us will not be proposing out of real love.

“Some would have been advised by traditional healers that they should get intimate with people with albinism like me so as to heal or exorcise themselves,” she said.

Mrs Memory Munyoro, who has two children born with albinism said she had a torrid time raising the kids as they were subjected to all sorts insults and name calling.

“During school days, teachers would not allow my kids who were born with albinism, to sit in front of the class. They were made to stay at the back of the class,” she said.

Recently, platinum giant, Zimplats took its campaign: “Beyond the Skin” to Binga. The campaign’s key objectives are to educate people on what albinism is and address issues of stigma and discrimination as well as drive acceptance of the integration of people with albinism in all spheres of life.

The campaign also seeks to facilitate annual distribution of sun protection materials, some of which are not easily accessible.

People with albinism in Binga expressed gratitude to Zimplats and its partners for bringing the campaign to their community, saying the move would bring relief to them.

Binga District Administrator Ms Linda Banda Ndethi said the community needed to accept those with albinism as they were normal human beings.

“We are grateful to Zimplats for bringing their campaign to Binga. The campaign has seen some people with albinism receiving some sunscreen lotions, lip balm and getting eye examinations. Some also received spectacles after eye examinations,” she said.

“Sometimes children fail to get to school because of the excessive heat that we sometimes experience here in Binga.”

Zimplats head of corporate affairs Busi Chindove urged other organisations to partner them in trying to conscientise people about albinism and make a difference.

“We need to join hands and fight this stigma so that everyone has an appreciation of albinism,” she said.

National Disability Board chairperson Mercy Maunganidze Chimanga who is also the national director for the Zimbabwe Albino Association said Zimbabwe still has a lot to do in order to eradicate stigma against people living with albinism. 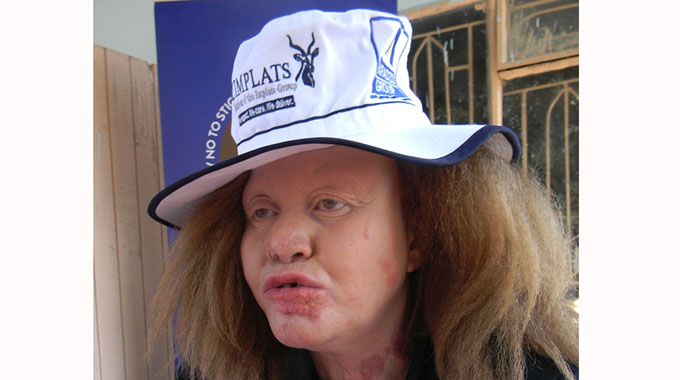 She says the majority of people still believe albinism was contagious and were not comfortable mixing with such people.

“We still have work to do in educating people that there was nothing amiss with someone living with albinism. It’s just a condition and not contagious as some would want to believe,” she said.

Mrs Chimanga who lives with albinism herself says she does not quickly offer a hand-shake when greeting people unless the other party offers.

“For me to extend a handshake when greeting someone, I always wait for that person to offer his/her hand because I don’t want to cross the boundary — and extend my handshake to someone who is not willing to greet me,” she said.

An optometrist, Dr Zolisa Jompolo of Optinova, a partner in the campaign, took time to explain the visual challenges faced by people with albinism.

Dr Jompolo spoke of the need for a holistic approach which includes dealing with the home environment, the school environment as well as the work environment.

“People with albinism are normally short sighted and have what is called astigmatism more enhanced by entry of light in the front of the eye. Light does not enter properly in the eye. Their eye twitching or eyeball spasm is referred to as nystagmus. Such a condition causes sudden eyeball movements,” the optometrist said.

Albinism is a rare group of genetic disorders that causes the skin, hair, or eyes to have little or no colour. Albinism is also associated with vision problems.

In so many African countries, people with albinism are misunderstood and mistreated because of their skin colour. It is caused by a defect in one of several genes that produce or distribute melanin.

The defective gene passes down from both parents to the child.

People with albinism are uniquely susceptible to sunburns, and at elevated risk of developing skin cancers related to chronic sun exposure.

Periods of high exposure or instances of extreme sunburn, especially in childhood, can precipitate the emergence of skin cancer later in life.

If the disease does develop, early detection and intervention are critical.

In many cases people with albinism develop pre-cancerous patches (actinic keratoses) that can be removed with liquid nitrogen cryotherapy before cancer occurs.