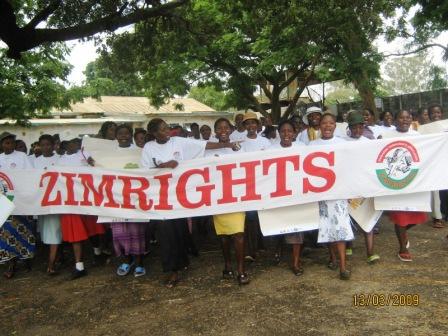 CIVIC society organisation, Zimbabwe Human Rights Association (ZimRights) has expressed concern over the sending of citizens to prisons and police holding cells for minor offences exposing them to the COVID-19 pandemic.

The rights group also said such practice was also endangering the Zimbabwe Prison and Correctional Services workforce. This came after national police spokesperson Assistant Commissioner Paul Nyathi released a statement dated January 19, 2021, saying the police had arrested 2 336 people for offences related to the contraventions of the lockdown regulations. Of these, 890 had been arrested for unnecessary movement while 920 for failing to wear face masks.

In a statement, ZimRights said the figures only provide a glimpse into the numbers of Zimbabweans that have been arrested for minor, including political opposition leaders and human rights defenders held at various police cells while others are in pre-trial incarceration exposing them to the pandemic.

“ZimRights takes note that while law enforcement remains crucial, a distinction should be drawn between ordinary crime and offences occasioned by the imposition of the lockdown, especially during this difficult time that citizens have been asked to stay at home without the provision of social safety nets,” the organisation said in a statement yesterday.

“ZimRights is concerned that the continued reckless detention of citizens, especially activists, for trivial crimes like tweeting, may now seem like a deliberate act to expose them to the COVID-19 pandemic,” the statement added.

ZimRights urged the government to respect fundamental rights during this pandemic. “The government must desist from targeting human rights defenders and political opponents and throwing them into cells exposing them to contract COVID-19.”

The lobby group added: “ZimRights urges the law enforcement arms of the government to consider using summons and written notices as the primary methods of bringing accused persons to court.”