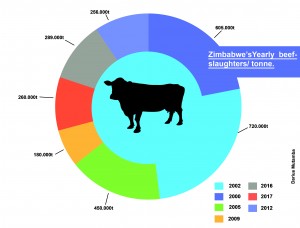 THE supply of beef for slaughter fell sharply during the third and fourth quarters of 2017, resulting in meat prices increasing, figures from the Livestock and Meat Advisory Council (LMAC) have shown.

Although other cost drivers contributed to the price increases, the decline in slaughter stock raised serious concerns in the industry after only 260 000 cattle were sold for slaughter last year compared to 720 000 sold in 2002, the council said.

Since the introduction of the land reform programme, slaughter stock has been on the decline and this has been compounded by outbreaks of diseases such as foot and mouth (FMD) and recurrent droughts.
The livestock industry witnessed strong growth in demand for beef during the second half of 2017. Wholesale prices of beef rose sharply above the average prices. Quality cuts retailed between $14 and $22 per kilogramme.

“The crippling drought of the 2015/16 season forced smallholder farmers, who are the owners of 90 percent of the national herd, to destock. This resulted in a record number of 288 000 slaughter sales to abattoir operators.

“Restocking by farmers in the 2016/17 season has drastically reduced the number of cattle sold for slaughter to 260 000. The higher producer prices on live cattle markets also pushed consumer prices up,” the LMAC said in its January 2018 report.

“Most cattle slaughter stock come from Masvingo province and the outbreak of foot and mouth disease in both Masvingo and Midlands provinces has severely reduced the supply of slaughter stock and meat yield as cattle, which are usually pen-finishing, could only be moved for direct slaughter to minimise the spread of the virus,” said LMAC.

In view of the recent FMD outbreak at Ardlui Farm in Chegutu, the Department of Livestock and Veterinary Services (DVS) principal director Unesu Obatolu called on all stakeholders in the sector, farmers, traders, transporters and marketers to co-operate with the department and stop the movement of infected cattle into cleaner zones.

“The outbreaks are mainly because of stakeholders in the sector who are not heeding the call to stop the movement of animals without proper documentation. It is time that we all take responsibility of the outbreaks and stop the spread of the disease,” Obatolu said.

To date infection has also been detected at two destination sites in Marondera and Macheke after infected cattle were moved from Mt Hampden Cattle Sales to farms in the two farming areas.