Zimbabwe has natural wonders, ferocious wildlife, warm locals, a fascinating culture, and more. Here are some must-visit spots for those with only a week to spare 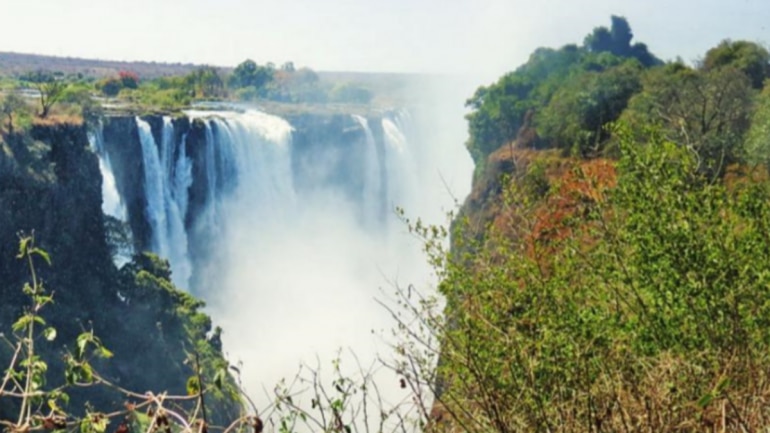 The Victoria Falls are a UNESCO Heritage site. Zambia and Zimbabwe share these falls and both countries claim they have the better view.

It’s not every day that you come across an elephant who thinks she’s a buffalo. This big beauty is ironically named, Nzou’, meaning elephant’ in the Shona language, and has been leading herds of buffaloes in Imire National Park, for over four decades. For me, Nzou seemed the perfect metaphor for my trip to Zimbabwe; a surreal experience where you cannot believe your eyes. Zimbabwe is full of surprises. But for those strapped for time, here’s where to begin:

This UNESCO Heritage site has a width of a staggering 1708 metres. You can hear the water as it plumbs the depths ,and leaves a cool mist in its wake. You can see Victoria Falls on foot, as I did. Or splurge for a helicopter ride over this natural wonder. The first white man to ever lay eyes on the falls was Scotsman David Livingstone who promptly named it after his Queen. But the KaloloLozi people had a more apt name for it, ‘Mosi oa-Tunya’ or the ‘smoke that thunders’.

It’s the largest national park in Zimbabwe at a whopping 14,651 sq. kilometres. It’s also home to all of Africa’s Big 5’. There are 50,000 elephants in this national park and it’s impossible to make a visit without spotting a herd or two. Sign up with an experienced safari guide and you’re in for a real treat. Of the Big 5 elephants, lions, leopards, rhinos and cape buffaloes, the big cats remain the most elusive. But don’t miss the woods for the trees; chat up your safari guide and you’ll learn of the ‘Ugly 5’ such as the warthogs, wildebeest, vultures, hyenas and marabou stork. One look and you’ll known exactly how they earned their names!

It’s where local delicacies and traditional music come together. With a local entertainment band playing out a local legend to the beat of the drum, you can bite into crocodile tail, impala, ostrich, warthog and even the famed mopane worms. In fact if you bite into these vitamin-rich worms, you can take home a certificate to prove it!

Lake Kariba is the largest manmade lake in the World. If you’re looking to get away from the crowds of tourists, head to this water-body. Hire your own cozy little house-boat and spend a night or two on the lake. I spent two night on the Sahwira’, a gorgeous little cruise-boat, which was my house at sea. The crew doubled up as guides, teaching me to fish; the chef cooked up our fresh catch. You can cruise from one bank to another, spotting crocodiles, rhinos and elephants along the way. Or you can just take a stroll on the shore where you’re unlikely to spot another human being. If solitude, with a dose of nature, is what you crave, head to Kariba.

There’s no dearth of national parks to choose from in Zimbabwe. But Imire offers you rustic-luxury. You can spend the night at the Imire Lodge with sink-into poster beds, bathrooms that overlook the wilderness, a cosy restaurant and a menu that offers you a taste of local cuisine.

The game drives promise to be a treat, particularly if Nzou makes an appearance. Apart from the elephants, Imire is home to the endangered rhinos. I was lucky to spot a white rhino and her little baby trailing behind her. A game drive here comes with more than just spotting wildlife; you learn that black rhinos and white rhinos are actually grey in colour! They earn their name based on the shape of their mouths: the black one has a pointed lip, while the white one has a large, flat one. You also learn that the kudu are referred to as Mc Donald’s’ in local speak; they have an M’ sign on their bottoms that seemed to have inspired Mc D’s. For animal fact to related legends, and entertaining ones at that, head to Imire.