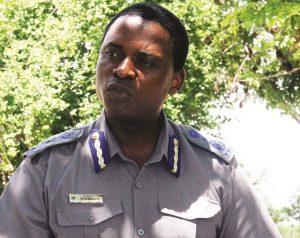 Speaking at a dialogue meeting aimed at mitigating election related violence which was held in the capital on June 19, the Zimbabwe Republic Police (ZRP) Officer Commanding Elections, Senior Assistant Commissioner, Erasmus Makodza admitted that in the past years, the law enforcement agents were executing their mandate in a partisan manner.

Senior Assistant Commissioner Makodza admitted that this was against the dictates of the law adding that it compromised the law enforcement agents’ ability to effectively deal with matters of political violence as they were largely tilted in favour of the ruling party which was mostly responsible for election related violence.

He attributed ZRP’s failure to operate in a professional manner to the old guard which was led by former President, Robert Mugabe who was deposed from power following a military coup in November 2017.
He said that since the ushering in of the “new dispensation” the ZRP has reformed and stands ready to deal with cases of political violence without fear or favour ahead of the 2018 elections.

The sentiments from the ZRP vindicate our long held claims that Zanu (PF) had captured key state institutions and this has undermined democracy in the country.

We however take the latest assurance from the ZRP with a pinch of salt given the fact that the law enforcement agents have a history of reaffirming their commitment to peace while at the same time executing their mandate in a very partisan manner.

During the bloody 2008 elections, the ZRP on numerous occasions pledged their commitment to ensure peaceful polls yet they paid a blind eye while Zanu (PF) activists were busy unleashing violence that resulted in loss of life.

In some cases, the victims of the Zanu (PF) violence ended up being persecuted by the police while the perpetrators walked scot free. What made the situation worse was the fact that senior police officers openly defied the constitution and pledged allegiance to Zanu (PF).

It is a well known fact that the public has lost confidence in the ability of the ZRP to act in a professional manner and worse still, during election periods when the law enforcement agents act as an extension of the ruling party. It is thus obligator for the ZRP to walk the talk on upholding professional standards especially as Zimbabwe heads towards the watershed 2018 polls.