A man for our time 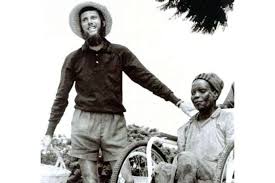 Source: A man for our time – The Zimbabwean

The 10th of September 1979 was the day we held the funeral for John Bradburne in the Catholic Cathedral in Harare (or Salisbury as it still was then). I gave the homily to a packed congregation .

The 10th of September 2018 was the day we held the funeral for Celia Brigstocke, John’s niece, at Milford in Surrey, in the UK. I again gave the homily, this time too to the many who gathered to mourn and celebrate Celia..

This amazing coincidence of the date – it was also the day (in 1979) the Lancaster House talks began that would lead to the independence of Zimbabwe – underlines the close connection between uncle and niece, for it fell to Celia to gather all the material about John that has emerged since his death 39 years before. She collected an archive in her home in Hereford of the poems John wrote, the letters he sent and the testimonies about his life from people many claiming to have been healed through his intercession,

Celia, and her husband Tim, struggled with the surge of interest in John which gradually gathered round a desire to see John beatified.  This was unchartered territory for both of them and there was some ambivalence in the response of those who could help take the cause forward.   This was not due to any lack of appreciation of John but just a reluctance to navigate the complex processes the Catholic Church lays down for such a step.  Our incapacity to find a way – both in Zimbabwe where John spent the crowning years of his life – and England where it all began – led to the process stalling.

It was at this moment that two things happened: Celia became ill with a cancer that was to prove fatal and a “postulator” or official promoter of the cause was appointed by Rome. It would seem these two events are connected: Celia’s giving of herself totally led to a breakthrough in the project she was devoted to.

So the cause for the beatification of John Bradburne is beginning.  The postulator, Enrico (I do not have his family name to hand) interviewed those whom he could and he was quite piercing in his questions.  There will be many more searching questions and part of the process is to try to find reasons why John should NOT be beatified.  There will be a “trial” according to Church law.

A further development this year is the English publication of Didier Rance’s Le Vagabond de Dieu, The Vagabond of God. It is a wonderful book for anyone who really wants to know John.  It recounts his wanderings but in particular it describes in sensitive detail the terrible struggles he had in his last years.  We knew the ever smiling joking John. What we did perhaps not know was the immense cost of his discipleship of Jesus.  There were times when John felt rejected by nearly everyone.  He was laughed at, expelled from Mutemwa and had to live “outside.”  His accommodation was that of a poor man and his food negligible. Finally he had an agony and a thirst, a Pilate-like attempted reprieve and finally death in a hidden place near the Mutoko road.

The place did not remain hidden for long and since 1979 there has been an immense explosion of interest and devotion.  This is no place to go into details but what is glaringly obvious is that John showed a flint-like determination to follow the way he felt drawn. Nothing mattered except his search for God.  Everything else – food, clothing, shelter, convenience or comfort came way down in his list of priorities.  So focused was he that he would not allow himself the joys of marriage and family life. He lived a solitary life in a tin hut totally content with the space it gave him to pursue the one goal of his life.

And one final thing. It was Heather Benoy who said, “Mutemwa made John.”  What I take her to mean is that John had spent almost fifty years searching for his way and all who knew him in those early years knew him as an exceptionally holy person. But it was Mutemwa that crowned it all.  There he combined his intense inner search with a total giving of himself in service to the people living with leprosy.  It was not a pleasant job and at first he recoiled from it.  But he soon embraced the life and his early years at Mutemwa were the happiest of his life. He would often write to his great friend John Dove, “I have found my place at last”