A Strongman Nicknamed ‘Crocodile’ Is Poised to Replace Mugabe 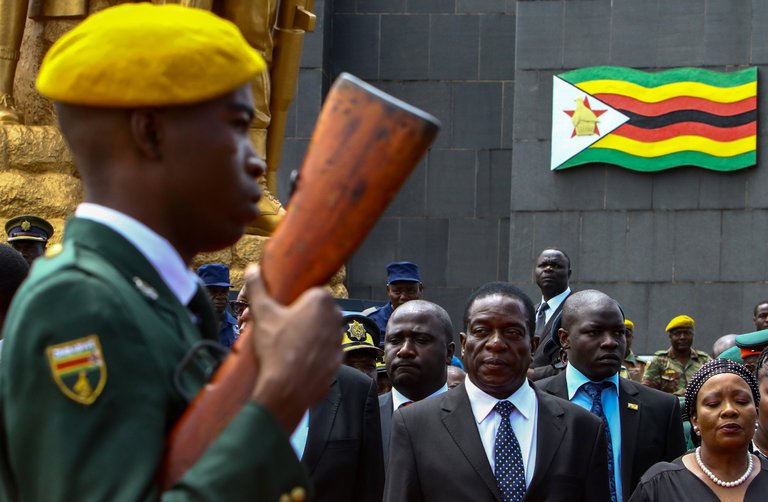 The son of farmers, he was a hardened freedom fighter by 16, trained as a lawyer and rose to become chief of his new country’s fearsome intelligence service. Known as the “Crocodile,” he once explained the nickname by saying: “It strikes at the appropriate time.”

Emmerson Mnangagwa, the vice president of Zimbabwe until he was fired last week, now stands to become its new leader, after the militarytook President Robert Mugabe into custody early Wednesday morningand plunged the southern African nation into uncertainty.

What role Mr. Mnangagwa, 75, played in what appears to have been a coup by his military allies is not yet known, but officials and observers of his rise to power say he shares some of Mr. Mugabe’s traits: He is power-hungry, corrupt and a master of repression.

“His ruthlessness is legion,” said Peter Fabricius, a South African journalist and one of many observers who fear that Zimbabwe is exchanging one strongman for another.

In firing Mr. Mnangagwa, Mr. Mugabe — Zimbabwe’s leader since independence in 1980 and, at 93, the world’s oldest head of state — might have finally overreached, singling out an erstwhile ally with liberation-war credentials and a deep power base of his own.

The firing was widely seen as paving the way for Mr. Mugabe’s wife, Grace, to succeed her husband as president, but Mrs. Mugabe — widely disliked for her volatile temper and expensive tastes — has almost no support among the military officers and intelligence operatives who maintain a tight grip on the country.

By the time of Mr. Mnangagwa’s dismissal, the enmity between the vice president and Mrs. Mugabe had spilled into the open. He accused her of trying to kill him with poisoned ice cream from her dairy farm, an allegation she denied.

As the army negotiates with Mr. Mugabe over a transition in which he would potentially be allowed to go into exile, the mood in the country is subdued. Most Zimbabweans have rejoiced at the downfall of the Mugabes, whose political stranglehold all but ruined the economy and alienated much of the population.

But many see the takeover as a symptom of the infighting and generational divide roiling the governing party, ZANU-PF, rather than a genuine chance at multiparty democracy and economic reform.

There is also fear about his association with some of the Mugabe era’s low points: Mr. Mnangagwa was accused of orchestrating a crackdown in the 1980s in which thousands of members of the Ndebele ethnic group were killed. He was an avid supporter of Mr. Mugabe’s most controversial economic policy — the expropriation and redistribution of land that had been controlled by white farmers since the era of colonialism. He was also accused of being behind deadly violence in 2008 a bid to rig polls in favor of Mr. Mugabe, a claim he denies.

“There is a healthy dose of trepidation because they know that the man who might take over is not Mr. Democracy,” said Wilf Mbanga, editor of The Zimbabwean, an online newspaper. “His track record is not impressive. He’s got a messy past. Is he going to clean his act? We don’t know.”

Emmerson Dambudzo Mnangagwa was born on Sept. 15, 1942, in Zvishavane, a mining town, the child of politically active farmers.

His father was steeped in the resistance movement against white settlers, and his political activism forced the family to flee to present-day Zambia. “He was born into politics,” said Victor Matemadanda, secretary general of the Zimbabwe National Liberation War Association, who served under Mr. Mnangagwa in the military.

Expelled from school for his activism, Mr. Mnangagwa joined the movement to liberate what was then Rhodesia, a British colony, from white rule. He received military training in China and Egypt.

At 16, he was part of a plot to blow up a railway line. His accomplices were summarily executed, but a priest appealed to the British to spare him on account of his age. He was instead given a 10-year sentence in prison, where he devoted himself to study. After his release, earned a law degree from the University of Zambia.

He soon left the legal practice to join the liberation movement in Mozambique, then a Portuguese colony, where he met Mr. Mugabe and became his personal assistant and bodyguard. He was a commander during the war for independence in the 1970s. He was at Mr. Mugabe’s side when the white-led government entered into political negotiations that resulted in the birth of Zimbabwe in 1980.

Mr. Mugabe rewarded Mr. Mnangagwa’s loyalty by elevating him to different posts. At various points of his career, he was minister of justice and defense, minister for rural housing and speaker of Parliament, among other positions.

While in charge of the Central Intelligence Organization in the mid-1980s, Mr. Mnangagwa was accused of orchestrating a brutal campaign known as Gukurahundi — “the early rain that washes away the chaff before the spring rain” — in which thousands of political opponents and civilians from the Ndebele ethnic group were killed, a claim that he has denied. He has been a central node in the web of relationships that connect the army, the intelligence agencies and the governing party.

Like his nemesis Mrs. Mugabe, Mr. Mnangagwa is deeply unpopular in parts of the country. He lost his parliamentary seat at least twice, once after he was accused of firebombing his opponent’s house, according to Mr. Mbanga, editor of The Zimbabwean.

In recent years, Mr. Mnangagwa has tried to reform his checkered past, styling himself an advocate of agricultural reform and a proponent of efforts to restore Zimbabwe’s relationship with outside investors and international institutions, including the International Monetary Fund and the World Bank.

In 2014, when Mr. Mugabe removed Joice Mujuru, then vice president, in circumstances similar to Mr. Mnangagwa’s later dismissal, he defended the president’s decision. Mrs. Mujuru went on to form an opposition party.

“It is not for nothing that he is known as Ngwenya,” said Mr. Fabricius, the journalist, using the Xhosa word for crocodile.

“He didn’t ride off into the sunset to launch yet another opposition party, or just retire from politics to make even more money, as many had expected,” Mr. Fabricius said.

The relationship with the Mugabes began to sour this year, after Mrs. Mugabe began to make an increasingly open bid to succeed her husband. She accused him of plotting a coup, and he accused her of trying to kill him.

Although the latest military action was set off by his firing, reports are emerging that it had been planned several weeks earlier, with senior military officers consulting South African and Chinese officials.

Mr. Mnangagwa’s allies received assurances by South Africa that it would not intervene as long as the action did not spill over beyond its borders, according to Africa Confidential, an online journal.

The origins of the nickname Crocodile are not clear. Some say it was Mr. Mnangagwa’s nom de guerre during the liberation struggle; others say it is derived from his family name.

In a phone interview, Mr. Matemadanda, the military veteran, elaborated on the nickname.

“A crocodile patiently waits for his target, pretending to be a rock,” he said. “At times you think he doesn’t react, or doesn’t have any solution to what is happening. He doesn’t show irritation until the optimal moment and then he strikes. And when he does, he doesn’t miss his target.”

“Everyone who gets into politics knows that the moment you join you don’t join to be the last name, you join with the hope that you’ll come out first,” he added. Regarding the latest developments, after a long career, Mr. Mnangagwa “has been patient for a very long time.”

As his commander, Mr. Matemadanda said Mr. Mnangagwa was “one of the most polite, tolerant, very down-to-earth persons that I have ever met.”