AMHVoices: Chamisa too hot to handle 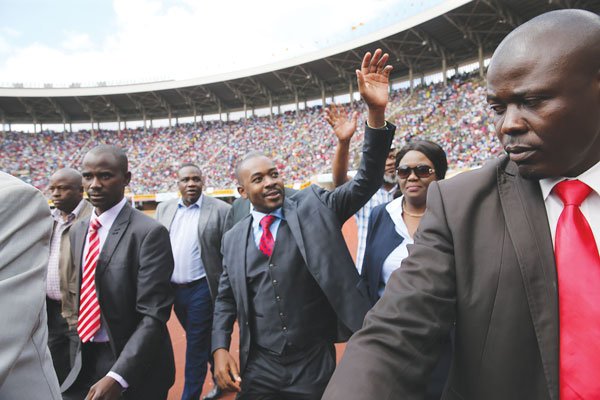 MDC Alliance leader Nelson Chamisa, young and eloquent, turned the political landscape upside down to the chagrin of his detractors at home

When he assumed the leadership of the MDC Alliance after the death of former Prime Minister Morgan Tsvangirai, some critics never gave him a chance, but he astounded them all.

He assembled a strong campaign team and swept through the whole country like a hurricane.

The firebrand and charismatic Chamisa mounted an electrifying presidential campaign which shook the world. He left nothing to chance. Zanu PF found itself on the back peddle. The over two million votes Zimbabwe Electoral Commission (Zec) agrees he got is proof of his tireless and sacrificial campaign journey.

Those who doubted him because of his age started to like him. He mesmerised everyone by his public speaking abilities. Before and during polling, it was crystal clear the race was between Chamisa and President-elect Emmerson Mnangagwa. Others were just making up numbers.

The disputed poll and its aftermath showed that Zanu PF had been hit and hurt. Chamisa is the only presidential candidate standing against Zanu PF after the election. The others wilted and melted at the scorching heat of the poll results, which saw some of the presidential candidates getting less than 1 000 votes in all.

His Constitutional Court (ConCourt) challenge on the rigged polls has separated boys from men. Zec, by revising its presidential results before the case is argued, amounts to accepting that they announced fake results, which seem to favour the Zanu PF candidate only.

But the real battle has not started and August 22 is the day we will know the truth. Thanks to the invincible and unstoppable Chamisa. He carries the hopes and aspirations of many people. He is holding fort where many cannot. He still has many options to pursue for Zimbabwe to realise its dreams. We cannot be this poor, while we have plenty of resources. Leaders like Chamisa can take this country forward. Never mind the negative narrative that he is too young to lead.

No matter what the ConCourt judgment will be, the buck now stops with Chamisa. No one doubts that. His decisions after the ConCourt ruling, which remain close to his chest, will determine the future of this country.

He has massive support. That cannot be ignored or washed away. MDC Alliance controls all urban councils. At 40 years, Chamisa is now one of the most powerful politicians in Zimbabwe.

As I wait for the ConCourt judgment, I urge all of us to remain calm and collected. The future is here. It’s Chamisa all the way.