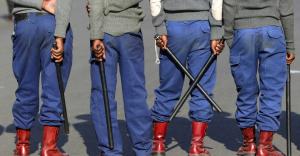 Armed Riot Police have disrupted community consultation process for our candidate selection in Kuwadzana. Our leaders were made to sit on muddy grass. Incidentally, Zanu PF was allowed to carry out primaries and violent elections without interference.

The party said more details on the matter will follow.

In recent years, armed police officers have violently dispersed MDC Alliance gatherings while some of the intended meetings were blocked.