At least 13 people sustained gunshot wounds during protests against the shock price hike, according to a doctors’ association. 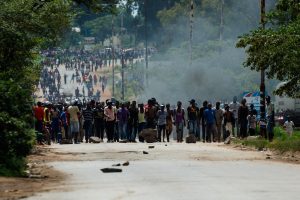 Police fired teargas as angry protesters barricaded roads with burning tyres and rocks in Zimbabwe on Monday, after the government more than doubled the price of fuel over the weekend.

The Zimbabwe Association of Doctors for Human Rights said it had “received widespread reports of protesters who have sustained gunshot wounds after being shot during the ongoing nationwide protests”.

Thirteen cases had been reported by midday in and around Harare, it said in its statement. The extent of the injuries were still being assessed, it added.

Shops and banks pulled down their shutters in downtown Harare as riot police patrolled the streets and a military helicopter flew over the capital.

President Emmerson Mnangagwa on Saturday night announced a more than 100-percent rise in the price of petrol and diesel in a bid to improve supplies as the country battles its worst gasoline shortages in a decade.

Among the protesters at the Bulawayo demonstration was the celebrated writer Philani Nyoni.

“We have suffered enough,” he told AFP, describing the government’s decision as “stupid”.

‘We have suffered enough’

Zimbabwe’s economy has been in a slump for more than a decade, suffering cash shortages, high unemployment and recently a scarcity of staples such as bread and cooking oil.

In his televised address late Saturday, Mnangagwa said the prices of petrol and diesel would more than double to tackle a shortfall caused by increased fuel usage and “rampant” illegal trading.

The main labour alliance, the Zimbabwe Congress of Trade Unions (ZCTU) has called for a three-day stay-at-home strike, accusing the government of lacking empathy for the already overburdened poor.

Police tweeted on Monday that it had “noted with concern that the ongoing protests have turned violent”, warning that “anyone caught on the wrong side of the law will face the full wrath thereof”.

The government meanwhile accused the strike organisers of pushing a political “regime change” agenda and of “subversive political activities”.

“It has become obvious that there is deliberate plan to undermine and challenge the prevailing constitutional order,” government spokesperson Nick Mangwana said in a statement late on Sunday.

He accused unnamed opposition parties of disguising themselves as civic groups and of sponsoring civil unrest.

But the main opposition Movement for Democratic Change (MDC) leader Nelson Chamisa said: “We have a national crisis which is descending into a humanitarian crisis”.

Mnangagwa took over from long-time ruler and autocrat Robert Mugabe following military intervention, before winning the presidency in a July election the results of which were disputed by the opposition.

“We want Mnangagwa to know our displeasure in his failure,” said another Bulawayo protester, 22-year-old Mthandazo Moyo.

“Mugabe was evil but he listened,” he added.

Mnangagwa announced a package of measures to help state workers following strikes by doctors and teachers over poor pay.

Doctors in state hospitals went on a 40-day strike beginning early December demanding salaries be paid in US dollars. They also called for improved work conditions.

Mnangagwa had on Saturday also announced “a package of measures to cushion government workers”.

But he warned that the government would come down hard on “elements bent on taking advantage of the current fuel shortages to cause and sponsor unrest and instability in the country”.

President Mnangagwa is currently on a tour of European countries. He was in Russia on Monday and will finish his tour attending the World Economic Forum at Davos, Switzerland.

When he took over from Mugabe, Mnangagwa pledged to revive the  moribund economy and end the country’s international isolation.