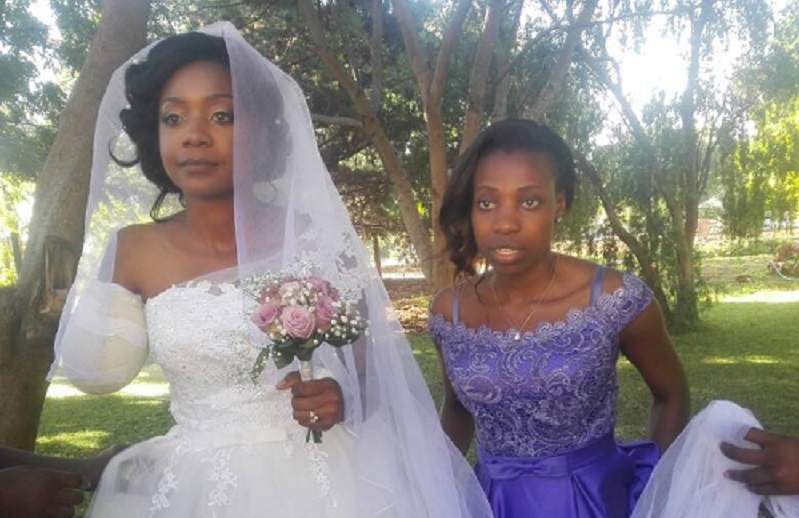 Peter Matika, Senior Reporter
FROM the jaws of a crocodile, to the hospital, to walking down the aisle two days after the attack.

This is the story of former Zimbabwean tennis star Mrs Zanele Ndlovu-Fox whose right arm was ripped off by a crocodile, while canoeing with her husband in the Zambezi River but still managed to wed Mr Jamie Fox, at a beautifully organised, heart-warming ceremony at Mater Dei Hospital in Bulawayo a few days after the incident.

She signed her marriage papers using her left hand but now the effects of the crocodile attack are back to haunt her.

Two days after the much publicised wedding, she started feeling pain in her left hand and after visiting the hospital it was discovered that the hand was also injured during the crocodile attack. Doctors have now fitted an orthopedic cast on her left hand after X-rays confirmed that she could have also damaged some bones on the hand.

“I didn’t realise that my arm was injured, until I started feeling pain after the wedding. The pain had been masked by the surgery done on my other arm. I began feeling the pain on our wedding day, as I had trouble holding stuff,” she said.

Mrs Ndlovu-Fox said she hoped her hand will be healed but at the moment her husband was helping her and showing all the love.

“I am enjoying the love and attention I am receiving from Jamie, he is here and is helping me to do everything. He is very supportive and loving,” she said.

Mrs Ndlovu-Fox lost her right arm while canoeing in Victoria Falls in the incident, where the crocodile bit and deflated an inflatable vessel the couple was using. The crocodile, according to the couple, attacked their vessel, before lunging and ripping off her arm.

Mrs Ndlovu-Fox also said she intended on relocating to the United Kingdom with her husband once her visa was processed.

“I will be submitting my application soon, I have had enough of this whole long distance,” she said.

The National Parks and Wildlife Management last week said it had since tracked and put down the big reptile.-@peterkmatika