Britain’s bet on Mnangagwa victory hangs in the balance

Efforts to nurse Zimbabwe back to international respectability depended on free and fair elections, but the plan appears to be unravelling. 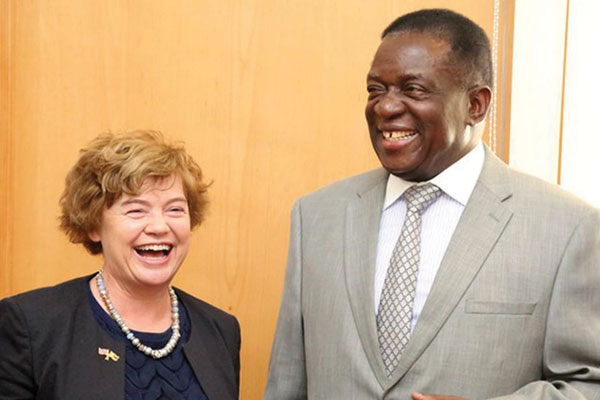 Ever since the then Africa minister Rory Stewart took the strategic bet to rush to Harare in November 2017 in the immediate aftermath of the fall of Robert Mugabe, the United Kingdom has invested heavily in nursing its former colony back to international respectability.

The Foreign Office analysis was that a short window of opportunity had opened to encourage the ruling Zanu-PF party to turn away from the violent chaos and economic disaster of the previous 30 years.

As soon as Stewart reached Harare, he stressed the rewards available to Zimbabwe if it took the path of reform.

Stewart in private was not naive about Emmerson Mnangagwa, Mugabe’s successor, or the democratic instincts of the army. Any student of Mnangagwa’s record knew he had been Mugabe’s enforcer, deeply involved in money laundering and massacres.

But Stewart could hardly do anything but hold his nose, and point to the opportunities that democratic reform might bring.

Zanu-PF 2.0 might seem an implausible concept, but the possibility existed that the ruling party post-Mugabe realised the status quo was not an option. Mugabe had presided over the fastest shrinking economy in peacetime history. Zimbabwe’s GDP per capita is approximately US$1 000, compared with US$6 000 in Botswana. Nearly a fifth of the country had left.

Although there was a limit to what the UK could offer—British sanctions were minimal—Britain did have influence with private investors and multilateral institutions such as the International Monetary Fund, the only body that could help lift Zimbabwe’s US$13 billion debt burden.

Britain also offered a return to the Commonwealth and other international seals of approval, but all depends on the delivery of free and fair elections. These were always going to be the acid test, the then British foreign secretary Boris Johnson said. The Zimbabwean government seemed to understand the bargain describing the elections as “an instrument of foreign policy”, the route to ending the country’s isolation.

As a result, these elections were probably the most monitored in African democratic history—a marked contrast to the previous rigged elections in 2013. In total, 43 different sets of external observers were officially invited by the government—including individual countries, blocs, such as the European Union (EU), liberation movements and two eminent individuals: Andrew Young, a former United States diplomat, and Jeff Flake, the Republican Arizona senator. More than 6 000 Zimbabweans acted as civil society observers.

The most important observers were the Southern African Development Community (Sadc), the EU monitoring team led by the German Member of the European Parliament Elmar Brok, the Commonwealth Observers group including the Conservative poll expert Lord Hayward, the 64-strong African Union observers headed by a former prime minister of Ethiopia, and the joint US-based International Republican Institute and the National Democratic Institute.

The UK was aware that such an array of observers might lead to a range of judgments about the fairness of the elections and did something to try to share and coordinate observations. Election monitoring is not a science and requires a lot more than an American senator staring at people peacefully voting.

The Sadc was noticeably more sanguine about the credibility of the result than the EU and US delegations. But the EU did not describe the result as illegal as the opposition MDC Alliance urged it to do.

The delay in announcing the election result and the overall performance of the Zimbabwe Electoral Commission hardly inspire confidence, but short of more egregious ballot stuffing the betting must be that the UK has gone too far with the reform process to pull back now.

Faced with the sight of teargas, protesters shot in the street and the rapid deployment of the army, the new Africa minister Harriett Baldwin has expressed deep concern and called for restraint from all sides.

But British MPs in Zimbabwe such as Kate Hoey are demanding that the UK embassy specifically condemn the army and the Zimbabwe Electoral Commission for delaying the announcement of the presidential results.

That political pressure is likely to build. Further deaths, and more evidence of ballot rigging, and the Foreign Office may have to admit that its considered gamble on post-coup Zimbabwe has not paid off.

Wintour is diplomatic editor of The Guardian.