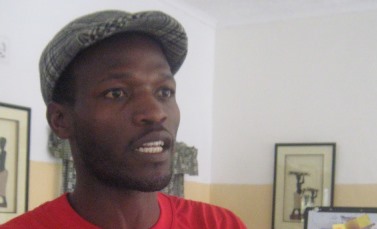 HARARE – Despite being in hiding following a government crackdown against
opposition leaders in the aftermath of the July 30 disputed elections, MDC
youth assembly chairperson Happymore Chidziva still refuses to be cowed.

Notwithstanding the fact that one of the MDC Alliance principals Tendai
Biti is currently in trouble with the law after he was arrested for
allegedly inciting the August 1 violence that led to the death of at least
six people, Chidziva told the Daily News that he is determined to continue
leading protests from the front adding that they cannot continue to be
victims of rigged elections.

“Our fight is justified. It’s a fight for a new order. Let them kill the
2,6 million who voted for (MDC Alliance president) Nelson Chamisa. We are
going to sleep on their doorsteps until we reclaim our victory. Only
cowards will support the so-called (President Emmerson) Mnangagwa’s
victory,” Chidziva said.

“Our fight will not be violent but peaceful. We are going to exercise our
constitutional rights of protesting. We are going to fight tirelessly
until victory is handed to the rightful winner…Chamisa. While we do
this, I would like to urge all Zimbabweans to remain peaceful.”

Asked if he doesn’t fear for his life Chidziva said God is on his side.

“They are human beings like me and I have nothing to fear. God is not for
a few. Our struggle is justified; we need to rescue our nation from the
jaws of poverty, unemployment and military rule. I heard the police are
still looking for me but I did not commit any crime.”

Recently the Constitutional Court (Con-Court) unanimously upheld
Mnangagwa’s July 30 election victory and threw out Chamisa’s petition that
had sought to overturn the result.

Chamisa claimed to have won the election with 60 percent and that
Mnangagwa failed to garner enough votes for him to be declared the winner.

He was seeking an order for him to be declared the winner of the July 30
presidential election however, the court dismissed his application.

Nevertheless, after the court verdict the youthful opposition leader
refused to accept Mnangagwa’s victory, insisting that he was the
legitimate winner of the tightly-contested presidential plebiscite.

Like his boss, Chidziva believe the Zimbabwe Electoral Commission rigged
elections in favour of Zanu PF.

“We know that they rigged the elections. We are going to have countrywide
protests till our stolen victory is back. We will use peaceful
constitutional methods; violence is foreign to us especially for me as
Bvondo (his nickname). I am actually a dove, I am a peace ambassador.”

Loosely translated, Bvondo is a Shona word that means “stirring things
up”.

And it’s a moniker that he wears proudly and fearlessly.