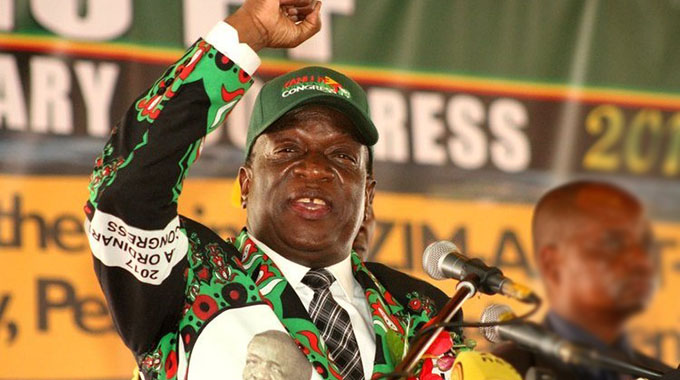 Thupeyo Muleya recently in Gwanda
Cabinet has approved a plan to modernise Beitbridge border post as the Government moves a gear up on the ease of doing business with civil works expected to commence soon, President Mnangagwa has said.

The Head of State and Government said he had since met directors of the company that won the tender to upgrade the country and Sadc’s busiest inland port.

He was speaking during rally at Phelandaba Stadium in Gwanda recently. President Mnangagwa said that the new administration’s re-engagement initiative had seen Zimbabwe joining Zambia and Botswana in the construction of the Kazungula Bridge.

“So far Cabinet has approved a plan to mordernise Beitbridge Border post to address efficiency issues and to promote the ease of doing business. Zimbabwe is open for business and hence we are attending to all the issues to boost trade and investment,” he said.

“I have already met with the directors of the company that won the tender to mordernise and upgrade Beitbridge Border Post and they gave me an assurance that all was on track.

“We are very hopefully that the project will be taking off the ground soon. In addition, we are also working on implementing the one stop border post with Zambia and Botswana at Kazungula. Through reengagement Zimbabwe is now part of the Kazungula bridge project.”

The President said Government had also embarked on a massive re-engagement programme with old and new partners to promote national economic development.

“After getting into Government we engaged on a mission to appraise Sadc leaders and the Chinese on the latest developments at home. Our foreign policy is to engage and re-engage. Our relationship is deeper and deeper with China,” he said.

He said Government was also seized with upgrading and repairing the country’s road network.

In his 2018 annual budget, the Minister of Finance and Economic Development, Cde Patrick Chinamasa allocated $14,5 million towards upgrading of infrastructure at Sadc’s busiest inland port.

According to the budget statement; “A total of $4,2 million will be spent on relocating the Vehicle Inspectorate Department (VID) from the border.