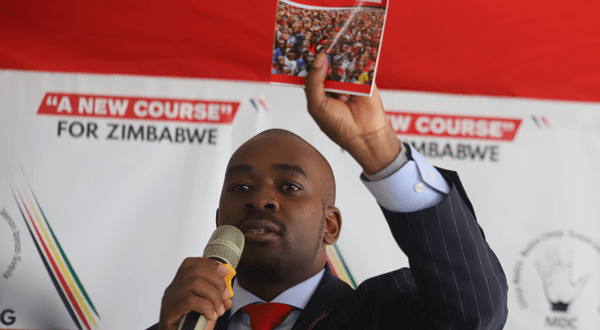 OPPOSITION MDC Alliance leader Nelson Chamisa has lamented the decay in the country’s public hospitals which he described as death traps where people now die from curable ailments as the Zanu PF government has failed to mobilise adequate drugs and motivate health personnel.

Addressing mourners at the burial of Glen View North MP Kennedy Dinar (MDC Alliance) in Masvingo yesterday, Chamisa said his party had in the past few weeks lost several top officials as a result of government negligence which has resulted in a collapsed public health delivery system.

“People are dying in hospitals everyday because there is nothing there,” Chamisa said.

“Do you know that hospitals have become a death trap? Week-in week-out, people are dying. We have lost many people in the party in the last weeks. It reflects how people are dying in the country and what is killing people is that there is nothing in those hospitals,” he said.

Chamisa said there was need for convergence of all stakeholders in the country to collectively end the crisis afflicting the country.

“We want a grand alliance of political parties, churches, traditional leaders, youths and all others to come together. We are the biggest party and we want all Zimbabweans to unite so that we have a convergence and a consensus to move together,” he said.

Chamisa added: “They say things are not moving and Chamisa is to blame because he is refusing to come for talks. They know we want dialogue that is not based on the need for positions.

It should be about free and fair elections, what people voted for. We want to improve the human rights situation. We want dialogue on how to improve the economy and not this corruption they are used to,” he said.

Chamisa conceded that his party was going through a rough patch in the fight against President Emmerson Mnangagwa’s administration.

“Of course, Tsvangirai (the late MDC-T leader Morgan) had fights with Mugabe (the late former President Robert), but Mugabe was better because he used gloves to hit. The one I am fighting with now — Ngwena (Mnangagwa), has no gloves, he is biting.

“When you are fighting a crocodile, don’t fight it in the water, take it to a ground level, it has no power there. I told him I am not joining him where he is and he said I am looking for someone else if you don’t want,” Chamisa said, in apparent reference to Mnangagwa’s calls for him to join the Political Actors Dialogue platform.