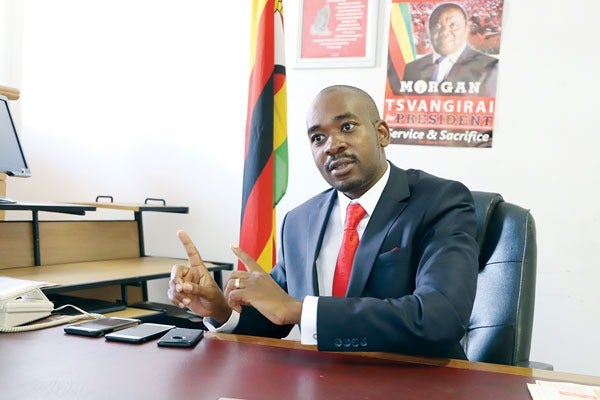 President Emmerson Mnangagwa’s regime is deeply concerned about the threat that Nelson Chamisa’s MDC Alliance party poses to its hegemony and on Tuesday it went to extraordinary lengths to try to neutralise that threat.

On the face of it, the Supreme Court has ordered Chamisa to submit himself to another congress of the MDC, which will be convened by a political opponent, Thokozani Khupe.

The Supreme Court, through Judges Bharat Patel, Paddington Garwe and Antonia Guvava, had to contort legal reasoning to arrive at its judgment.

While the thrust of this article is not to give a critique of the judgment, suffice it to say that its legal reasoning is seriously flawed from start to finish.

A few examples: firstly, when the case was brought the pleadings show that the party cited was the MDC-T.

The judges changed that in the judgment to the MDC alone, which it cannot do.

The only “MDC” party the Zimbabwe Electoral Commission (ZEC) has recognised since 2008 has been the party known as the MDC led last by Welshman Ncube which formed part of the GNU, but which was dissolved when it joined the MDC Alliance prior to the 2018 election.

This was no typographical error by the judges but part of the deliberate attempt to conflate a variety of parties into one MDC so that the purpose of the judgment could be achieved.

Then, secondly, although the court agreed that the entire issue was moot (because both Khupe had held a congress for the MDC-T in May 2018 and the MDC Alliance had a congress in May 2019) and that it “cannot but take judicial notice of (certain) political realities” it chose to be exceptionally selective in which realities it took notice of.

The one glaring fact which the court ignored was what State organs have accepted as fact – namely that the July 2018 election was contested by, among others, two separate political parties, namely the MDC-T under Khupe and the MDC Alliance under Chamisa, which were accepted as different political parties by ZEC, and have been accepted as such ever since.

Parliament itself accepts that there are two separate parties in the House – namely MDC Alliance and MDC-T.

These facts were conveniently ignored by the Supreme Court, which was clearly at pains to conflate the two.