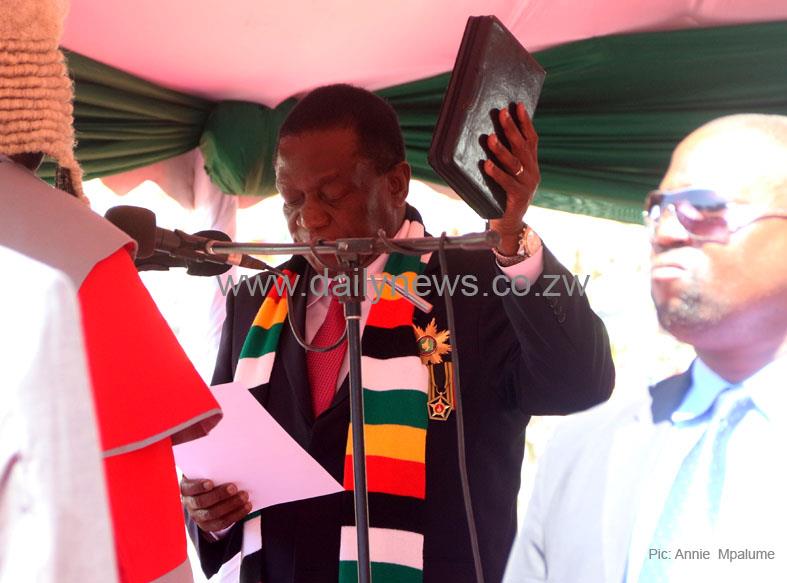 Zimbabwe has been without a Cabinet since August 26, when Mnangagwa took
oath of office after a lengthy hiatus caused by Chamisa’s Constitutional
Court application, challenging his electoral victory.

The only appointments he has so far made relate to his deputies,
Constantino Chiwenga and Kembo Mohadi, who were reappointed last week.

Highly-placed sources told this publication yesterday that the Zanu PF
leader, who has “out-stretched” his arms to Chamisa, was not rushing to
appoint his Cabinet in the hope that the MDC Alliance leader would agree
to working with him in some form of broad-based government.

This comes as the United Kingdom and the European Union (EU) are said to
be nudging protagonists in the Zimbabwe crisis to smoke a peace pipe to
release pent-up pressures contributing to an on-going meltdown of the
country’s economy.

Reports, which have not been denied by Brussels and Number 10 Downing
Street, suggest that their diplomats are proposing an arrangement that
mirrors the system in Britain, where the leader of the opposition and his
chief whip are paid by the State.

As if to confirm this, a shadowy columnist in one of the State newspapers
believed to be Mnangagwa’s spokesperson, George Charamba, has hinted that
there could be behind the scenes negotiations for the two leaders to work
together.

He said the administration was just waiting for Chamisa to cool down after
losing the elections for meaningful talks to proceed.

“Looking in the crystal ball, much really depends on how soon and well the
young man (Chamisa) recovers his poise so he merits the regard and package
that awaits him from his winning rival.

“Far more than all of us, he stands to gain a great deal in the impending
Second Republic, until now a blank concept and cheque needing some ink,
pen and a steady scrawling hand, if Zimbabwe is to enter a new and mature
phase in its national politics,” the columnist wrote.

The writer said a key paradoxical assignment for Mnangagwa was going to be
one of drawing in and closer what he described as an immature and disloyal
opposition, while not bringing them in by way of an inclusive government
which no one in Zanu PF countenances at this stage.

“This needs great creativity, even greater courage, bearing in mind it is
on this question that ED either stumbles or else over-leaps, the latter
allowing him to lay an enduring basis for a lasting legacy. And once this
puzzle is resolved, the challenges on the economy will be an easy run down
the hill,” the columnist said.

Contacted for comment yesterday, Zanu PF spokesperson Simon Khaya Moyo
told the Daily News that the duty to appoint ministers was that of the
president, adding that no one could be privy of how Mnangagwa was going to
choose his Cabinet.

MDC Alliance national chairperson Morgen Komichi said he was not yet aware
of any overtures from Mnangagwa.

“As far as I am concerned they have not yet approached us,” Komichi said.

Despite the denials, Chamisa has been mandated by his national council to
engage in dialogue with all stakeholders in the local and international
community.

Chamisa, however, said the dialogue will be anchored on five key issues,
chief among them, the respect of the true election outcome, return to
legitimacy and democracy and institution of electoral reforms for the
conducting of free, fair and credible elections in the country.

He said dialogue will be around reviving the country’s economy.

Analysts believe it is important for the two parties to work together for
the good of the country, as this creates great chances of improving the
country’s economy.

He said the delay in announcing Cabinet might also be linked to
Mnangagwa’s need to balance the divisions within the ruling party.

Within his party, Chamisa has a number of forces to appease based on
tribe, gender, other social inclusion factors, the military and war
veterans.

“There are many factions in Zanu PF to be balanced, and it was never going
to be just a contest between technocrats and military figures, or between
some fabled new guard and the old guard. In any case, as far as I can see,
there are few really able technocrats in Parliament. Bright and sensible
people have all gone into business,” said Chan.

Maxwell Saungweme, another political analyst, said Mnangagwa was trying to
manage people’s expectations, with high chances that he might work with
Chamisa.

He said it was increasingly becoming clear to Chamisa and the alliance
that Mnangagwa is the President and regardless of rigging claims Zimbabwe
has to move on.

“I see Chamisa working with Mnangagwa soon under the guise of putting the
country first. Otherwise politically it will be difficult for him to
refuse to work with Mnangagwa given that he has MPs and local councils the
alliance won,” said Saungweme.

Political analyst Rashweat Mukundu said working together comes with its
fair share of problems which might not be good for the country.

“While it may bode well for Zimbabwe that our political leaders find each
other this may not resolve the fundamental contestations on electoral
results hence a lack of trust within any GNU (Government of National
Unity). I think the MDC and Zanu PF must simply agree on a politics of
respect and rule of law,” he said.