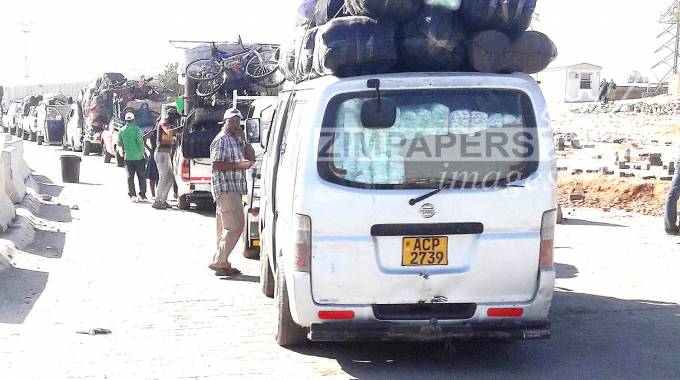 Thupeyo Muleya Beitbridge Bureau
There was chaos at Beitbridge Border Post over the weekend after transporters, commonly known as Omalayitsha, staged a sit-in in defiance of the Zimbabwe Revenue Authority (Zimra)’s move to maximise duty collection on specified goods entering the country from South Africa.

So tense was the situation that many travellers, mostly those in private cars blocked commercial cargo from entering the border arena from the neighbouring country.

The chaos started at 9am on Saturday up to 3am on Sunday and by yesterday, the border was still congested although traffic was now moving after Zimra met with the truck drivers.

It took the intervention of officials from the security agencies and a private security company at the border to diffuse the potentially volatile situation.

“I spent over eight hours to get cleared at the border, where most motorists, especially those who transport goods for informal traders resisted complying with Zimra over duty payments,” said a traveller identified only as Mr Dewa.

“In some instance, the drivers were abandoning their vehicles there to cause congestion within the Malume Zone (where informal traders are cleared). However, they gave in after realising that Zimra had adopted a no nonsense stance.

“In addition, the New Limpopo Bridge was full of static trucks throughout Saturday night.

“Things only got better on Sunday morning after vehicles entering the country were cleared at midnight.”

A border official who preferred anonymity said the situation was made worse by the unavailability of parking space on the imports commercial section, where civil works were underway to modernise the border.

“There is not much space to accommodate vehicular traffic due to the ongoing works to pave the dusty commercial yard on the imports section,” said the official.

“You will also note that besides the intensified enforcement by Zimra on import duty, there is also a marked increase in people leaving and entering the country since it is month end.”

Zimra’s head of communications Mr Taungana Ndoro was yet to respond to questions at the time of going to print.

A lot of haulage trucks and private vehicles were still held up in a long slow-moving queue at the border by the end of the day yesterday.

Beitbridge Commercial Transporters Association chairman Mr Osbert Shumba said: “The main challenge is the border delays both on movement of commercial trucks and other cross borders.

“The delays are caused by the lack of staff at the commercial office. In addition, these are being changed as and when the need arises and such a scenario is a let down. We have and always engaged the local Zimra authorities over the recurrent delays, but our efforts seem not to be yielding any results.”

Mr Shumba said they were happy with the state of the automated system for customs data (Asycuda), which was recently resuscitated, since it was one of the major causes of delays at the port of entry.

The Herald is reliably informed that transporters incur at least $500 in demurrage costs per day due to chaos at the port of entry.