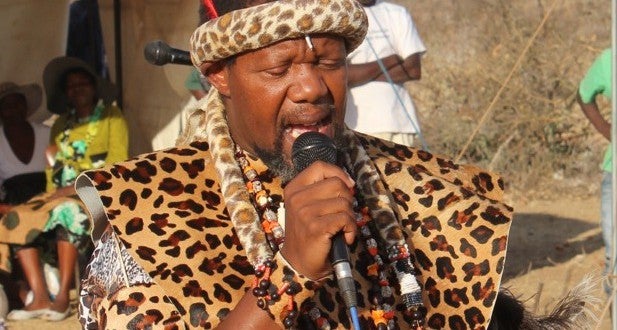 MDC leader Nelson Chamisa yesterday visited jailed Chief Nhlanhlayamangwe Ndiweni at Khami Maximum Security Prison on the outskirts of Bulawayo, where the traditional leader revealed he feared for his life.

Ndiweni told Chamisa that he was not taking any chances and was not having any food prepared by prison officials.

He also said a team of medical doctors have promised to have him undergo a full medical check-up once released.

Ndiweni is serving an 18-month jail sentence following his conviction by Bulawayo magistrate Gladmore Mushove for destroying a villager’s homestead. His co-accused, 23 other villagers, were ordered to do community service.

“I have not been taking food prepared by the prison. I have been extra-careful and ensuring that all the food I take is coming from outside, from the people I trust,” he said.

“Also, just yesterday [Friday], a team of medical doctors was here and promised a full medical check-up once I am released,” Ndiweni, who was in high spirits, told Chamisa.

Chamisa, who was mobbed by inmates during the visit, was accompanied by the chief’s lawyer Dumisani Dube and Senator Hellen Mpofu.

Chamisa told The Standard in an exclusive interview that the traditional leader was jovial and the prison stint had not sapped his energy.

“I was encouraged to see that the people’s chief is in high spirits,” he said.

“He is happy that he is not broken; he is not a broken man.

“He continues to show courage and fortitude under extreme circumstances, but my coming here is just to express solidarity with him.”

Ndiweni has approached the High Court challenging his conviction and sentence.

He has also lodged papers seeking bail pending the determination of his challenge.

“He thanks the people of Zimbabwe for not being provoked to violence after his incarceration,” Chamisa added.

“He thanks people for continuing to be peaceful, and is encouraged and fortified that he now has a first-hand account of the rule of law and justice situation in our country so these things are going to be key when he leaves prison.”

Meanwhile, Chamisa condemned the recent abduction of opposition and civic society activists as terrorism, describing the kidnappings as akin to terrorist acts carried out by Al-Shabaab, a deadliest jihad group in sub-Saharan Africa, largely operating in Somalia.

“All our leaders at various levels even civic society activists are being terrorised,” he said.

“They are being terrorised for fighting for the terrorists and their terrorisers to also be happy.

“I don’t understand it because our problems are mutual, they are collective.

“A line has to be drawn in the sand. We can’t be back to Ian Smith’s days of Rhodesia, back to the days of repression under Mr [Robert] Mugabe.

“The same old song is now being played and we must not dance to that music but also, we have to escalate this thing because we also have international instruments and international bodies that have a responsibility to protect the people.”