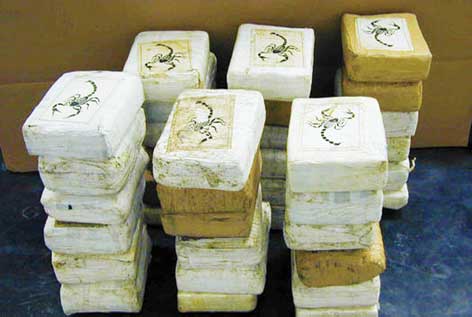 A BRAZILIAN national and her local accomplices have been arrested for illegal possession of 230 grammes of cocaine valued at $1 932 000.

Patience Muringa (32), Siege Fried Zibusiso Dhlovu (33) and Caroline Silver Mafra (23), a Brazilian national, appeared before Harare magistrate Barbara Mateko who remanded them in custody and referred them to the High Court for bail application.

Allegations are that on April 1, police got information that Mafra was flying to Zimbabwe from Brazil with a contraband of cocaine aboard an Ethiopian Airlines flight.

She was expected to arrive at Robert Gabriel Mugabe International Airport the following day.

Acting on the information, detectives from the Criminal Investigation Department Drugs and Narcotics, Harare and the Homicide and Law and Order laid siege at the airport and intercepted Mafra.

It is the State’s case that Murinda and Dhlovu arrived at the airport driving a BMW vehicle to pick her and they were also arrested.

After interrogation, it was established that they were acting on instruction from a Nigerian national only identified as Boby.

The two were supposed to accompany Mafra to a guest lodge in Marlborough, Harare, where she was booked and was supposed to give the drugs to Boby.

It is alleged that Murinda and Dhlovu later led detectives to their residence where they recovered a plastic bag which contained fabric and some powder substance from one of their bedrooms.

Preliminary tests were done on the powder and it tested positive to cocaine.

The recovered cocaine weighed approximately 230 grammes with a street value of $1 932 000.