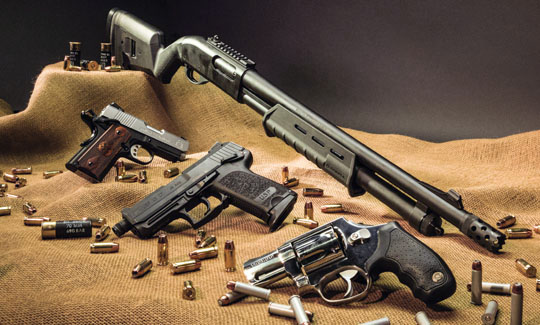 Miriam Tose Majome
MORE people are carrying firearms. It is on record that most of the firearms are being acquired illegally. The increase is unsettling and is evidenced by an increase in the incidence of armed robberies. Illegal firearms are a problem in the country and the situation is getting worse.

On a quiet afternoon on January 21, 2013 an explosion ripped through the quiet but busy high-density suburb of Zengeza in Chitungwiza.

Police later confirmed that it was an anti-tank landmine and it had exploded at a traditional healer’s house.

Five people were killed and many were injured as surrounding houses were all razed to the ground in the blast. To this day in typical Zimbabwean urban legend style superstitious people still swear that it was a witchcraft lightning deal that turned sour.

It is important to revisit what the law says about possession and use of firearms as more people acquire guns and ammunition  legally or illegally.

The firearms and ammunition laws are very strict and until now have resulted in relatively low levels of violent crimes involving firearms such as robbery, kidnap and freak calamities like the Zengeza blast. The majority of people who own guns do so legally but some of them end up in the wrong hands.

The Firearms Control Act [Chapter 10:09] prescribes the relevant firearms and ammunition laws. Firearms are described as any lethal barrelled weapons of any description from which any shot, bullet or any other missile can be discharged or which can be adapted for the same purposes. Ammunition means explosives like grenades, bombs and all other missiles such as bullets.

Possession and usage of firearms has to be tightly controlled, otherwise communities will be ungovernable.

Images of gun-totting Colombian rebels roaming urban streets in Bogota do not augur well for peaceful normal living. Gun lobbyists and gun owners are a potent political force anywhere and have the ability to upset the social and political balance.

The very powerful National Rifle Association in the United States is a permanent thorn in the flesh for all American presidents and presidential candidates.

The association is so powerful that it cannot be controlled because it resists any government attempt to impose stricter gun laws when urgent reforms are needed given the rising levels of gun-related violence and crimes in the United States. Whoever holds a gun holds the power.

Followers of history will recall the story and celebration of the Maxim gun invented by British inventor Hiram Stevens Maxim in 1883. It is arguably the one weapon most associated with British imperial conquest. Without it there might never have been a British Empire, thereby altering the course of world history and politics. Everywhere, guns have shaped history and politics, so it is essential to control them tightly.

The Maxim gun was first used by Britain’s colonial forces in the 1883-1894 first Matabele War at the battle near the Shangani River. An estimated 700 British soldiers fought off approximately 5 000 Ndebele warriors with reportedly just four to seven Maxim guns between them.

Thousands of Ndebele warriors were killed while only ten British soldiers died from the spears and arrows thrown at them by the Ndebele.

The timeless words of poet Hilaire Belloc emboldened the British soldiers in this and all wars they fought in their pursuit of imperial  and material conquest: ‘‘Whatever happens, we have the Maxim gun and they have not,’’ and he was right.

Firearms are used by civilians for protection of private property, personal security, self-defence, hunting, sport, hobbies and other approved uses. Showing off, impressing friends and lovers and intimidating other people are not valid reasons for owning a gun. In addition, having a firearm licence is not a licence to use the gun anyhow and anywhere. No person is allowed to buy, acquire or have in their possession any firearm or ammunition unless they have a firearm certificate. A firearm certificate is issued only when certain conditions stated for its issuance have been met. Unauthorised possession and usage of firearms is a criminal offence which attracts a lengthy prison sentence.

Applications for firearm certificates are made to the police through the controller of firearms.  The duration of licences vary from three to ten years and are renewable.

The controller will only grant a firearm certificate after careful assessment and vetting of both the application and the applicant.

The applicant has to have a good reason for wishing to purchase and use a firearm. Farmers, guards and businesspeople who carry cash and valuables are good candidates because they are regular crime targets. So too are victims and targets of crime like persistent housebreaking but are also subject to thorough vetting.

The controller has to be satisfied that the applicant is capable of possessing and using the firearm or ammunition in a reasonable manner which will not endanger public safety and peace.

Licences cannot be given to persons who are prohibited from possessing firearms, for example people with a violent criminal history. People of intemperate habits or unsound mind or any other unfit persons cannot be licensed to own guns.

Guns should not be put in the hands of bad and short-tempered people or, indeed, fools although they often are and a fool and his gun are soon spotted. A firearm is only to be used for the purpose for which it is licensed. If it is issued for protection of cash in transit, it should not be used for guarding property or to rob banks.

A firearm has to be stored and kept in an approved, secured cabinet as specified in the regulations.

The licensee is compelled to inform the controller of any change of address if the firearm is permanently removed from where it is ordinarily kept.

A licence may be withdrawn in the event of a breach of conditions of its issuance or upon discovery of concealed information which could have been useful in determining the sustainability of an applicant to be granted a licence. A person will be guilty of a criminal offence if they used false information to acquire a firearm.