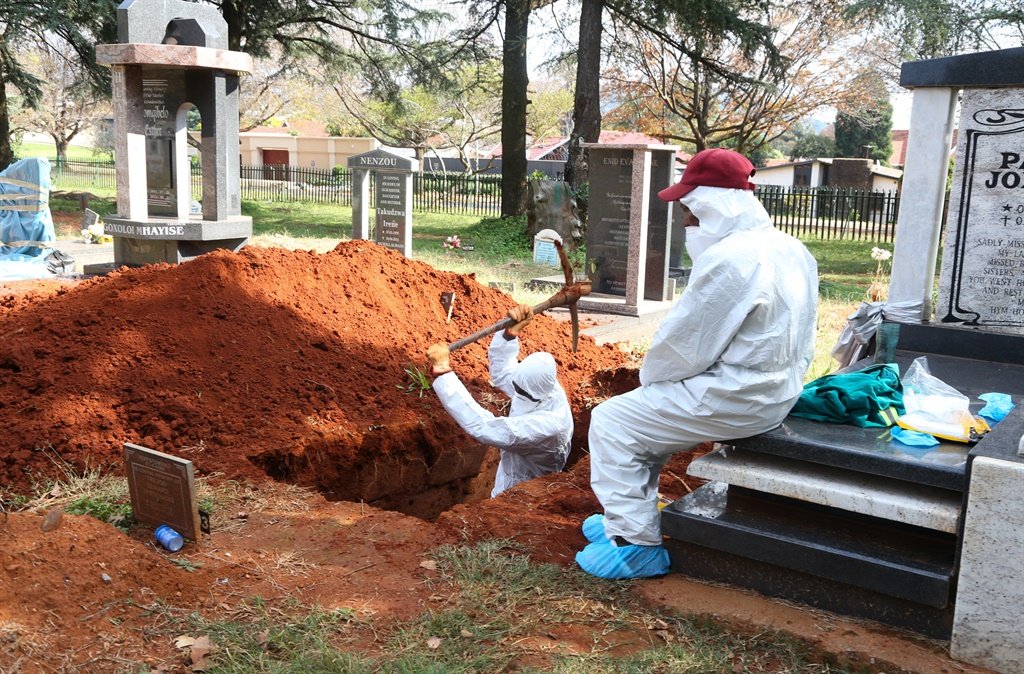 AS AUTHORITIES continue to battle to contain the deadly coronavirus, amid alarming deaths and new infections in the country, Zimbabwe’s stretched funeral parlours say they are now being overwhelmed by the virulent disease.

Apart from having to queue at cemeteries to bury Covid-19 victims, morticians who spoke to the Daily News On Sunday yesterday also warned that they were likely to run out of mortuary space soon, due to the soaring Covid-19 deaths.

Both the Zimbabwe Association of Funeral Assurers (Zafa) and individual funeral assurance companies, said they had not expected to be dealing with such high numbers of coronavirus burials at this point. All this comes as Zimbabwe continues to battle to contain the deadly respiratory disease, which has killed scores of Zimbabweans since the turn of the new year.

On Friday, Manicaland Provincial Affairs minister, Ellen Gwaradzimba, was among 30 people who succumbed to the novel coronavirus — whose national death toll is now approaching 700. Moonlight Funeral Services was among the country’s biggest funeral parlours which confirmed to the Daily News yesterday that Covid-19 deaths had stretched players in the life assurance industry.

Its services director, Charity Mungofa, said that it was increasingly getting difficult, as a result, to bury Covid-19 victims within the stipulated 48 hours due to congestion at graveyards.

“At most cemeteries now, it’s becoming complicated because of the numbers. We used to take just a day to bury a person, but it has since changed and it now takes two days.

“In some cases at most cemeteries, graves … are no longer enough to cater for all deaths daily. We used to book a place today and bury a person the following the day, but all that has changed.

“We now have a backlog and we are now keeping the bodies in mortuaries, something that is now exposing
our employees to Covid-19,” Mungofa told the Daily News On Sunday.

She also revealed that some employees of funeral parlours had contracted coronavirus due to the increased exposure brought about by soaring deaths.

“We have a few cases of employees who have contracted Covid-19 and they are isolated at home. In such cases, the companies have chipped in by testing members regularly,” Mungofa added.

Surprisingly, she also said, the rapidly increasing Covid-19 deaths had impacted negatively on the finances of funeral parlours.

“Financially, it’s really impacting us negatively. You find that there are issues to do with PPE (personal protective equipment) which were not even paid for by policyholders.

“We are buying our own PPE because we are treating every death as Covid-19, to protect our employees because they are the ones who are conducting removals. These PPE are very expensive and it’s something that is affecting companies big time,”

Mungofa further explained to the Daily News On Sunday. She also said that most parlours were now grappling with storage space, as their mortuaries were not designed to store so many bodies.

In addition, she said, the advent of Covid-19 had also created other problems for them as it was difficult to remove bodies of those who would have died at home — because police were wary of risks posed by the spread of coronavirus.

Police, for fear of their lives I guess, are taking their time to be involved. “For instance, when a death is reported to the police, they are expected to attend immediately for paperwork to allow undertakers to take over, but presently it’s difficult.

“The procedure has become too complicated and at times it’s now even taking up to five hours to collect a dead body,” Mungofa told the Daily News On Sunday.

On his part, national police spokesperson, Paul Nyathi, said law enforcers were trying their best to follow all necessary Health ministry protocols. “All body clearances are undertaken in line with protocols by WHO
(the World Health Organisation) and the Health ministry.

“We urge those that have grievances to approach police or the Health ministry so that if there are any grey areas these can be sorted out,” he said. Zafa general manager, Taka Svosve, also confirmed to the Daily News On Sunday that the spiralling Covid-19 deaths and infections were threatening the viability of funeral parlours.

“If Covid-19 cases continue to spike, there is a possibility of an unusual spike in claims on funeral policies, meaning an unexpected hit on cash flow and other resources for funeral assurers. Naturally, this Covid-19 situation also creates anxiety amongst funeral parlour staff, like everywhere else. The fear of the known or unknown again naturally takes grip. Our members are, however, maintaining 24/7 vigilance on the safety of their staff in light of this
Covid-19 pandemic,” Svosve said.

While representatives of funeral parlours were reluctant to share the actual numbers of Covid-19 burials that they were doing, investigations by the Daily News On Sunday revealed that in Harare alone, funeral companies were handling at least 25 “Covid-19 burials” a day.

In off the record-briefings with employees at the main cemeteries in the capital, undertakers confirmed that this figure approximated the reality on the ground.

“Here, we are having an average of 18 burials per day. Of those 18, about six would have succumbed to coronavirus.
“We were actually overwhelmed last Sunday as we had to deal with 45 burials, of which 10 cases were a result of Covid-19,” an undertaker at one of the Harare City Council cemeteries told the Daily News On Sunday.

Another undertaker said: “Daily we are handling an average of 16 burials, seven of which will be of Covid-19. What we are doing here is that all coronavirus burials take place after 3pm to avoid contact”. The undertakers said at times cemeteries would be “completely overwhelmed”, resulting in burial backlogs at mortuaries.

Amid the runaway cases of Covid-19 cases, Vice President Constantino Chiwenga urged Zimbabweans on Friday not to panic, but to be even more vigilant in their daily lives — as the country reels from the second wave of the lethal coronavirus.

This came in the wake of Gwaradzimba’s death, who became the second minister to die from coronavirus — after the former Lands, Agriculture, Water and Rural Resettlement minister, Perrance Shiri, also succumbed to
the disease in July last year. Shiri, a liberation struggle stalwart and former military commander — who was born Bigboy Samson Chikerema before he joined the war of independence in the 1970s — endured a difficult and lonely death in his car, as he tried in vain to drive himself to a hospital for treatment.

Chiwenga — who is also Health and Child Care minister — said authorities were doing all they could to manage the disease, further rejecting social media chatter that the country did not have adequate beds and equipment to deal with Covid-19 patients.

“It would be … an exaggeration at this stage, to suggest that our Health institutions are overwhelmed by cases of Covid-19. Admittedly, the recent escalation of cases of the pandemic in the country caused a high demand for healthcare. “Nonetheless, let me re-assure citizens that Zimbabwe’s public and private health institutions still have adequate capacity to offer health services to all patients,” Chiwenga said.

“It is also well-documented that among the active cases recorded so far … two to three percent warranted hospitalisation with specialised treatment.

“At least 12 to 13 percent required discharge within two to three days of admission … while the bulk of 85 percent only required self-isolation,” Chiwenga added.