Zimbabwe continues to record progress in dealing with the second wave of Covid-19 infections, with the fifth week of the year and the resumption of the Level Four lockdown recording further falls in the number of daily cases, daily deaths  figures and the number of Zimbabweans still listed as active cases.

This is well below a quarter of the 956 rolling average peak for the second wave seen on 14 January.

The curve is flattening a bit, but this could well be due to a higher percentage of those who are infected being caught by the testing programme. 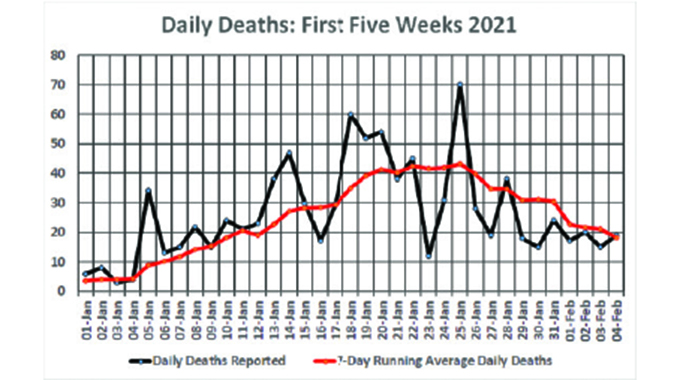 The falling percentage of those testing positive in the testing programme not only shows the continued dampening down of the second wave, but also that the programme is reaching more of those who could be infected and so is picking up more of those with no or only trivial symptoms who might not have come forward for testing before.

The daily deaths reported have also continued to show steady decline when the rolling seven-day average is taken to get the trend line, with the sharp peaks and troughs in daily reports also being less extreme.

By Thursday this week, the rolling average was down to 18, almost half the 35 of Thursday last week at the end of the fourth week and well below the 43 seen on 25 January.

The death rate figures tend to lag the infection rate figures by around 10 days because of the time the average person takes to develop the severe symptoms that increase the risk of death.

The number of active cases continues to fall, reaching 5 124 on Thursday, a sharp drop from the 7 067 at the end of the fourth week and less than half the peak on January 16. 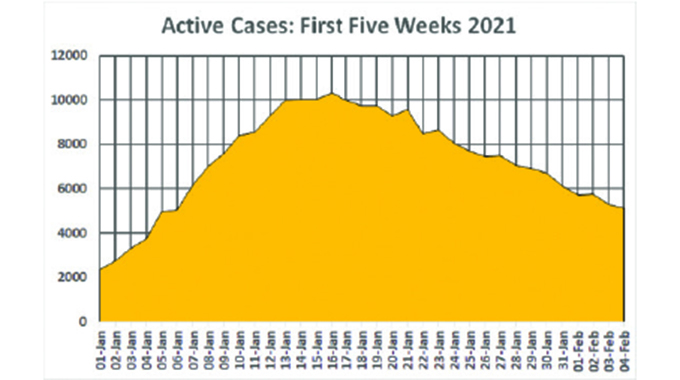 The level four lockdown, extended to February 15 last week, still has more than a week to run before the next review and decisions are made on  what easing of lockdown level is possible and how this is to be phased in.

Zimbabwe moved from Level Two back to Level Four at the beginning of last month as it became obvious that the country was facing a severe second wave of infections, largely triggered by growing complacency among many people and the festive season travel and social gatherings.

Even when the lockdown level is reduced, enforcement of lockdown regulations is likely to remain tight to prevent and return to complacency among large sections of the general public, triggering a third wave.