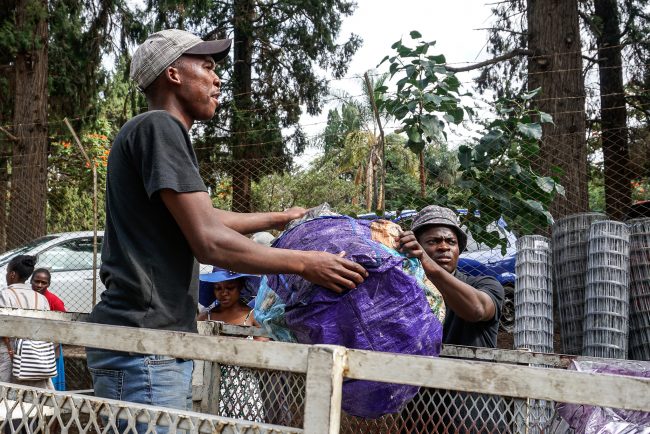 Cross-border traders bring goods from abroad to resell in Zimbabwe, and the informal trade ripples through the country’s economy, providing jobs and lowering the cost of staples. Now this industry – and the nation – must reckon with a closed border.

HARARE, ZIMBABWE — In March, bus driver Doubt Ncube says he was gloomy as he watched porters unload goods from his and other buses in a busy terminal in Harare, Zimbabwe’s capital.

He had just returned from South Africa. He knew it would be his last journey for a while: The border was closed soon after thanks to the spread of the coronavirus.

“I am stressed because I survive wholly from money I earn through driving cross-border traders to and from South Africa,” Ncube says.

The border between the two countries was shut on March 26 after South Africa reported 709 cases of COVID-19, the disease caused by the coronavirus, and Zimbabwe had five reported cases and one death. While the closure was for the sake of public health, it also cut off the livelihood of Zimbabwean cross-border traders, who purchase goods in South Africa for resale in Zimbabwe, and their drivers.

Zimbabwe has 34 confirmed cases of COVID-19 and four deaths as of May 2. Following the closure of the border, the government instituted a nationwide lockdown on March 30, restricting movement to essential trips and services.

Even before the coronavirus outbreak, Zimbabwe was already in an economic crisis with runaway inflation, an unstable currency policy and wide-scale unemployment. Zimbabwe’s exact unemployment rate is unknown, but some estimates put it as high as 90%. Many Zimbabweans have turned to informal employment, including cross-border trading. The industry also supports other professions, including drivers like Ncube.

Zimbabwe’s cross-border traders are an important part of the country’s economy. They supply cash-strapped consumers with goods at a lower cost than in formal supermarkets. Cross-border trading is also a good source of income, with the average cross-border trader earning about 12,000 South African rand (ZAR) ($639) a month in sales, according to a 2017 Southern Africa Migration Programme report.

I am stressed because I survive wholly from the money I earn through driving cross-border traders to and from South Africa.Doubt Ncube, a bus driver

Before the closure, Ncube would make four or five trips a month, earning about 1,500 ZAR ($80) each time. But now he’s left with no choice but to stop driving – and give up his income.

Ithiel Munyaradzi Mavesere, an economics lecturer at the University of Zimbabwe, says the cross-border trading industry has the most workers in the informal sector, with many traveling both within the region and farther abroad.

Killer Zivhu, president of the Zimbabwe Cross-Border Traders Association, agrees, adding that cross-border trading is an important income source for the country.

“Many earn a living through this trade,” Zivhu says.

The spread of the coronavirus quickly shuttered cross-border trading here, though many were hesitant to believe the scope of the pandemic.

Patson Chiva has been a cross-border trader for five years. He says he initially ignored reports of the coronavirus, believing it would not affect people here, who have recently seen cholera and typhoid outbreaks. Misconceptions about who could become infected were prominent, he says.

“I thought as a black person I was immune to this disease,” he says. “But I later realized that this is something different.”

Like Ncube, cross-border trading is Chiva’s only source of income, which he uses to support a family. But with the border shut, he has no way to provide for them.

“I have three children and parents who are in the rural areas who depend on me for survival. If this lasts, I do not know how I will be surviving and taking care of my dependents,” he says.

Zivhu says the coronavirus has put many cross-border traders in a dire situation. Many live a hand-to-mouth existence and must sell goods to earn money, he says. Closing the border with South Africa has left the traders and workers who support them vulnerable and without money to pay for rent, school fees or even food. Zivhu likens it to a natural disaster.

“It’s like they have been affected by floods and left in an open space,” he says.