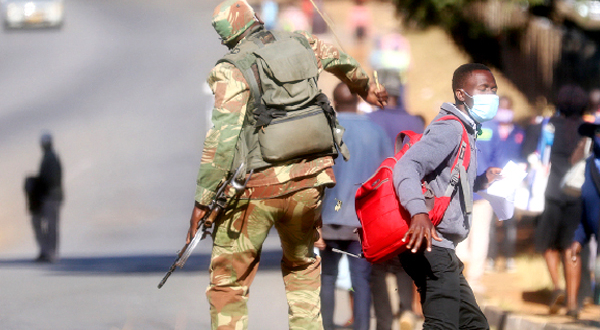 TENSION has gripped Zimbabwe after President Emmerson Mnangagwa announced a dusk-to-dawn curfew amid fears the Zanu PF leader, who is failing to proffer solutions to deepening socio-economic problems, is using COVID-19 to contain a possible uprising.

Mnangagwa on Tuesday announced new lockdown measures he said were meant to contain the spread of COVID-19 after positive cases soared to more than 1 800 this winter, with at least 26 deaths.

The opposition MDC Alliance said Mnangagwa was desperate to deal with his “political problems” and using COVID-19 as “his shield” by justifying unleashing the security forces on civilians ahead of the planned July 31 protests.

“Why impose a curfew? Is he saying that COVID-19 is spreading between 6pm and 6am?” MDC Alliance deputy spokesperson Clifford Hlatywayo asked rhetorically in an interview with NewsDay yesterday.

“The measures announced by Mnangagwa are political, especially the curfew part. We don’t support political leaders who abuse the COVID-19 pandemic to pursue their political agenda.”

Government has intensified its crackdown on critics and on Tuesday arrested journalist Hopewell Chin’ono and July 31 protests organiser Jacob Ngarivhume, who are being charged with promoting violence.

There are reports that activist #Tajamuka/Sesijikile leader Promise Mkwananzi, who has been actively mobilising for the protests, and MDC Alliance deputy chairperson Job Sikhala were on the police wanted list for the same.

“You must not abuse the poor to gain what you want politically and wanting to politicise COVID-19. Why is he quiet on COVID-19 funds and equipment looting if he is sincere? This is a strategy used by political cowards to survive, but the people know all that now,” Hlatywayo said.

However, the MDC-T led by Thokozani Khupe said though Mnangagwa had shown leadership in addressing the COVID-19 crisis, it would be sad if it turns out he has “other motives”.

“The whole point, we are told, is to address the COVID-19 threat so whatever it takes, as long as it will help to address that, then it is fine, but it will be sad if it turns out to be what it is not,” party deputy spokesperson Khalipani Phugeni said.

“The government should avoid taking actions that unnecessarily impede freedoms and socio-economic activities. The COVID-19 lockdown restrictions should be informed by the reality on the ground and evidence from the public health experts,” he said.

“The general public should be fully engaged and informed on COVID-19 health literacy response so that they know which activities or contacts are most likely to spread the virus in order to identify what will have most impact on stopping it.”

Rusike said government was supposed to effect lockdown in hotspots, arguing the move would also affect the informal traders who constitute more than 95% of the working population.

“The new lockdown measures should have fully addressed the issue of porous borders, border jumpers and haulage trucks that continue to smuggle people, especially from South Africa, thereby increasing the number of unexplained local transmission figures. Hundreds of Zimbabweans are coming back home using unauthorised entry points and without going through the quarantine procedures, thereby putting the lives of their relatives and fellow citizens at risk of infection,” he said.

Ironically, soldiers, who are supposed to be enforcing the curfew mainly in residential areas, are embroiled in corruption along the borders, where they are reportedly demanding money to allow passage for returnees.

Defence minister Oppah Muchinguri-Kashiri attributed the corruption to hunger and lack of resources.

Political analysts said the new measures had nothing to do with COVID-19, but were a “political statement”.

“The measures have little to do with COVID-19 because they lacked substance on how the government is going to increase access to healthcare facilities on those that are infected and the growing numbers of Zimbabweans who are coming from outside the country who are now in quarantine,” analyst Rashweat Mukundu said.

“In fact, what we got is the reversal of our rights as citizens, which are the rights to association. It is unacceptable that under COVID-19, certain limits to citizens’ right have to be implemented, but it appears that COVID-19 is now an excuse by Mnangagwa’s government to simply clamp down on its rivals and also manage the threats of protests that have been planned by opposition groups and political activists.
“One gets a sense that the pronouncement by the President has more to do with the politics of the country than managing COVID-19.”

University of Zimbabwe political science lecturer Prolific Mataruse said a lot was bound to happen under the guise of the announced curfew, including harassment of ordinary people and in some instances, taking over of a government.

Presidential spokesperson George Charamba, however, said there was nothing out of the ordinary about the curfew imposed by Mnangagwa as it was a trend the world over as part of the measures to deal with COVID-19.