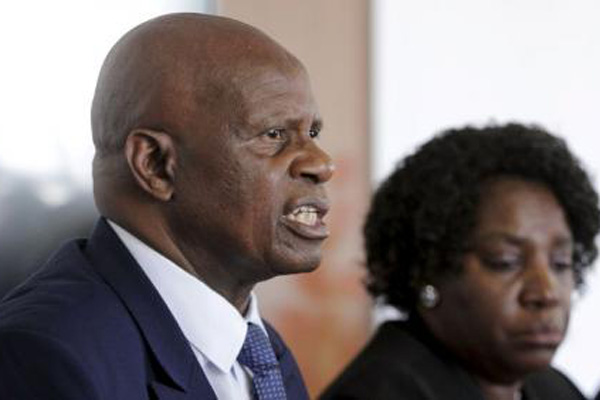 THE ruling Zanu PF party has said it will not apologise for the alleged “looting” of the Reserve Bank of Zimbabwe (RBZ) farm mechanisation facility and blamed sanctions, Rhodesians and the opposition MDC Alliance for the failure of the land reform programme.

Responding for the first time after days of silence after the naming of senior party officials who benefited from the 2007/8 RBZ-funded farm mechanisation scheme, but never paid back, acting party spokesperson Patrick Chinamasa accused United Kingdom-based lawyer Alex Magaisa of working to please his foreign paymasters.

“Zanu PF has no apologies to make for the revolutionary land redistribution programme embarked upon from 2000, it makes no apologies for the government interventions in the various sectors of the economy, including the farm mechanisation programme to empower its new farmers in order to render the land reform programme successful,” Chinamasa said.

Magaisa over the weekend released a list of Zanu PF officials, including President Emmerson
Mnangagwa, senior judges, clerics and several other Zanu PF apologists who benefited from the RBZ programme and never paid back the loans.

After the leak, former central bank chief Gideon Gono tried to defend the beneficiaries, saying it was never a loan and no one was obliged to pay back the money for the equipment given.

However, Gono was further exposed after Magaisa provided documentary evidence, including newspaper articles and letters confirming the beneficiaries who were supposed to repay the loans.

“The allegations by Dr Alex Magaisa rubbishing the State interventions of that nature carried out under very difficult circumstances are a frontal brazen attack on the land redistribution programme,” Chinamasa said.

He said the farm mechanisation programme was undertaken as an empowerment tool for the farmers and was not a loan, but a subsidy, claiming that the Zanu PF government, through its interventions, had over the past 20 years fed the nation.
However, Zimbabwe has suffered its worst food crisis since 2000, with observers accusing the underutilisation of farms as one of the major reasons the former “breadbasket of Africa” was in a crisis.

Over seven million Zimbabweans are food insecure and in need of urgent humanitarian assistance, with more than 4,3 million people severely food insecure in rural areas, according to the latest Integrated Food Security Phase Classification analysis, undertaken in February this year.

Chinamasa said there was no corruption or looting in the way State resources were used to cushion farmers, adding that Zimbabwean farmers should know they were under siege from “a Rhodesian hand which is trying to portray our empowerment programmes through government as looting and corruption”.

“If there was any corruption, it was the theft of land by whites from blacks and the attendant livestock thefts, where they took livestock from black Zimbabweans without compensation, a situation that the Zanu PF government is seeking to reverse and address.”

In a hard-hitting response, Magaisa said: “It’s not often that one is given special treatment by an authoritarian regime. Chinamasa’s rambling statement is a poor attempt at obfuscation, literally creating dust to no avail.

Instead of creating a straw man, those who got State loans must pay back the money.

“Claiming I’m attacking the land reform is cheap politicking to deflect attention. Chinamasa is just making a loud noise without addressing the core issue: Political elites took public funds with a duty to pay back, which duty they failed to meet, transferring the debt to taxpayers.

“They were not ready for this moment and the statement suggests it was made by someone in a state of disorientation and bewilderment. As I have said before, Chinamasa and the Zanu PF cabal are conflicted because they were the principal beneficiaries of the farm mechanisation scheme.”

MDC Alliance secretary for presidential affairs Jameson Timba said: “I have read the response to Magaisa’s BSR on farm equipment loans. They call it the grand theft of taxpayers’ money revolutionary. I agree with them, most kleptocracies are modest and subtle in their looting, these guys are brazen. They must just pay back the money.”