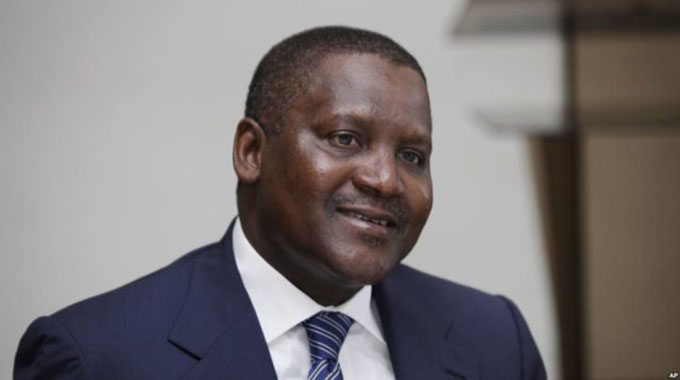 Mr Dangote has renewed interest in pursuing his $1,5 billion investment in Zimbabwe that was on the verge of collapse and on Monday last week, dispatched an advance team comprising geologists to ties loose ends to his planned investments.

The team will be in Zimbabwe for 10 days until Thursday this week.

When the tycoon last visited the country in 2015, he expressed interest in power generation, coal mining and cement manufacturing, but was frustrated by the previous administration due to policy inconsistencies and bureaucracy.

The business tycoon is also interested in the country’s agriculture sector.

The Confederation of Zimbabwe Industries (CZI) president Sifelani Jabangwe, told The Herald Business that with the abundant investment opportunities in the country, Mr Dangote was always ready to take every opportunity available to invest in Zimbabwe.

“With President Mnangagwa preaching the open for business gospel, multilateral institutions like the World Bank and the International Monetary Fund are interested in extending lines of credit to Zimbabwe.

“There is Karo planning to move in before year-end with a $4,2 billion platinum project, Russian billionaire Dmitry Mazepin coming in the country to explore fertiliser manufacturing and mining opportunities, certainly Mr Dangote did not want to be left out in the country’s economic revival.

“Given the work on the Ease of Doing Business and the Indigenisation and Empowerment Act being reviewed and fast tracked by the President’s office, clearly Mr Dangote seems to be impressed by the progress that we are making as a country,” said Mr Jabangwe.

“The technical group is back in the country,” she said.

“With the new dispensation, things are going to move on smoothly.

“This is the team that the president of Dangote Holdings, Mr Dangote, has sent to Zimbabwe to do the groundwork before his major visit in the few weeks to come.

“They are here in the country for 10 days and looking for an investment of $1,5 billion.”

Analysts believe that the visit by the Dangote team presented an opportunities for market linkages and creation of wealth and jobs.

Economist Luckson Zembe said: “The returning of Mr Dangote in this new dispensation shows great confidence in the new administration.

“After all what had happened in the past (policy inconsistency, corruption and bureaucracy), (Mr) Dangote is certainly going to invest in the country, which will be a positive for our economy.

Mr Dangote is a Nigerian business magnate and owner of the Dangote Group.

The group has interests in commodities in Nigeria and other African countries.

The firm is importing coal from Zimbabwe and the country expects to grow its foreign direct investment portfolio to generate more jobs, create wealth and contribute significantly to its Gross Domestic Product as part of efforts to revive the economy.